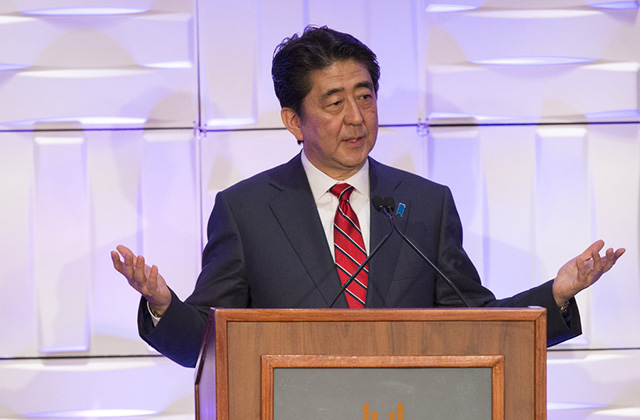 Below are excerpts from Rudd’s remarks. The entire briefing can be replayed via the audio player at the bottom of the article.

It is difficult to overemphasize the significance of the Japanese government's current exercise in the reinterpretation of Japan's postwar constitution. The relevant provision of Article 9 of Japan's postwar constitution reads that ‘the Japanese people forever renounce war as a sovereign right of the nation and the threat or use of force as means of settling international disputes.’ This has not been set in absolute stone since 1945. It has, in fact, been the subject of four sets of reinterpretation since then. So exercises in formal Japanese constitutional reinterpretation as opposed to explicit revisions [of the] Constitution are not unique in the post-45 period.

The second, and perhaps more significant reinterpretation of the Japanese constitution and Article 9 is as follows: The new defense agreement will allow the self-defense force of Japan, with parliamentary support, to respond to attacks on third countries, not just the United States, and thereby aid any allies — American allies — that are in close association with Japan, provided that those attacks directly affect Japanese security; and that the country or countries in question specifically request Japanese assistance.

In April of 2015, the U.S. and Japan agreed to new defense guidelines which require, or which enable Japan to participate in broader humanitarian peacekeeping operations. Furthermore, it enables Japan to cooperate with the United States in cyberspace for the first time. It will also address the nature of U.S.-Japan cooperation, war and peace, intelligence, surveillance, reconnaissance, air and missile defense, maritime security, asset protection, training exercises, logistic support, and the use of facilities. These are, again, important sub-agreements which occur within the framework of the reinterpretation of the Japanese peacetime constitution.

Putting all of these things together, therefore, we are noticing, I believe, a decisive shift in the way in which Japan, under Prime Minister Abe, sees its future national security posture, its future national security flexibility in terms of its operations, not just for the United States, but with other allies of the United States in the Asia-Pacific region.

On Japan’s Economy and the Successes and Challenges of “Abenomics”

Firstly, a decisive policy of fiscal expansion involving $210 billion plus — in fact, if you add the figures together, probably some $240 billion plus in installments since the early part of 2013.

Secondly, and most significantly, the Japanese government's decision, under the new governor of the Central Bank of Japan and supported by Prime Minister Abe, to engage in a U.S. style policy of quantitative easing, up to 57 percent of GDP. The direct consequence of quantitative easing in Japan has had the effect of lowering the value of the Japanese yen on currency markets and the indirect effect of that, in turn, would be to provide a boon to Japanese exports. This is the second arrow of Abenomics.

The third arrow, and what is often described, perhaps unfairly, as the missing arrow, is a big program of structural reform to the Japanese domestic economy. Another element of this third arrow is, of course, agricultural reform. The reason why this is significant in terms of the prosecution of an agricultural reform agenda is that Prime Minister Abe's strategy, I believe, is to use the external economic instrument, in terms of trade policy agreement, to affect added policy changes domestically, in order to bring about greater productivity from Japan's declining agriculture sector; and also to release capital into other more productive areas of the Japanese economy for investment purposes and long-term economic growth.

The Future Dynamics of Japan-China Relations

The question of Japan and China relations brings us to the very present, and news of the last several days when Japan has just released its annual defense report. The report says, ‘China, particularly over conflicting maritime issues, continues to act in an assertive manner, including coercive attempts to change the status quo, and is poised to fulfill its unilateral demands high-handedly without compromise. Japan is strongly concerned about China's actions, and we need to keep watching closely.’ [The annual defense report] makes a number of other observations as well. But the overall point is that, not just because of the historical tensions between China and Japan over Senkaku/Diaoyudao, not just because of the looming significance of the August 15th statement from Prime Minister Abe on the Second World War, but also, including in the last several days, this significant report to the Japanese Diet on Japan's overall strategic posture indicates that from Tokyo's perspective, the principal strategic challenge it faces for the future is China.