Listen: Experts Discuss a Strategy for Putting an End to Human Trafficking 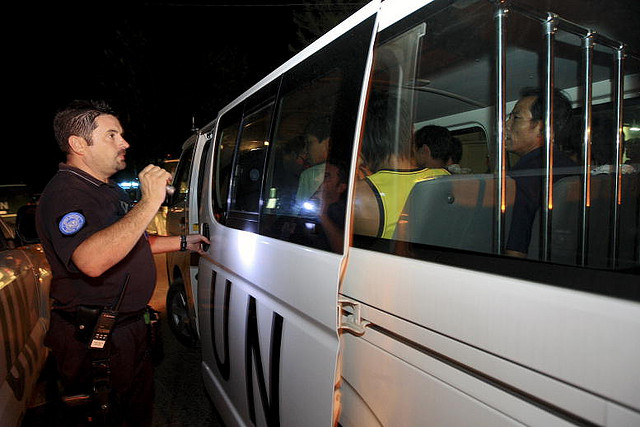 A young woman in India toils in a hot and dusty factory, working long hours sewing garments together locked behind closed doors. Meanwhile, a boy — lured away from home by brokers — pursues an opportunity on a Thai fishing vessel in the Andaman Sea, staying for weeks on the water under the threat of being thrown overboard. In New York, a domestic worker, her travel documents confiscated, is forbidden from leaving as she works from sun-up until well-past sun-down, taking care of children, cooking, and cleaning up her "employer's" apartment. All three are from different countries and all are working in forced conditions without pay.

Increasingly, governments are getting involved with the prevention of human trafficking, and new legislation in the United States suggests that U.S. businesses will take action against this crime in their global supply chains, as well.

Human trafficking is a global crime, considered the second largest behind the drug trade, with an estimated value of $32 billion per year. In the last decade, the U.S. government — and indeed governments around the world — have increasingly become interested in preventing human trafficking, which is called a “form of modern day slavery.” Their work, along with that of civil society, is important, but has been challenged by unscrupulous profiteers, willing to exploit workers simply trying to eke out a living.

Trafficking is defined simply in the United States as the force, fraud or coercion of a person to engage in commercial sex or forced labor. But neither slavery nor trafficking are new phenomena, and for nearly a century, laws have been in place internationally looking at their prevention. 1926 saw the creation of the International Slavery Convention at the League of Nations, but it wasn’t until 2003 that the UN adopted a Trafficking Protocol as part of the Organized Crime Convention which obligated countries to cooperate on the issue of trafficking in persons globally.

At the national level, the United States in 2000 adopted the Trafficking Victims Protection Act, sparking a chain of domestic legislation aimed at preventing forced labor. At the state level, in 2010, California Senate Bill 657 (“The Transparency in Supply Chains Act”) required companies operating in that state with gross receipts of more than $100 million to post on their websites information about the steps they are taking to eradicate human trafficking in their supply chains. In September 2012, President Obama issued an Executive Order entitled, "Strengthening Protections Against Trafficking in Persons in Federal Contracts," which will have far-reaching consequences for a range of contractors and subcontractors in the United States and abroad.

All of these laws — both at the international, national and state levels — have implications for the prevention of trafficking around the world. However, their effect is yet to be fully known: Many government regulations, which should have significant impact in theory, are difficult to enforce in reality. This is particularly because trafficking violations often occur behind closed doors, and also because law enforcement agencies can be ill-equipped to adequately address one of the world’s most egregious human rights violations. There are jurisdictional issues as well: What might be law in one country or territory may not be recognized in another.

For this reason, businesses, and more specifally multinational firms present in more than one jurisdicational area, can demand that national partners take action in stamping out this crime. Bound by both legal and moral obligations to ensure workers are protected, multinationals may have the greatest impact if they choose to support ethical vendors and suppliers all over the world.

On an individual basis, the penalties for human trafficking are severe.  The need for comprehensive support for trafficked persons, not only in the United States, but in Asia, is great, and law enforcement is often ill-equipped and misinformed to distinguish between a victim and a criminal. Collaboration across all aspects of society is critical for stamping out this scourge, but in the meantime, the U.S. legal system, through cooperation with the private sector, can help greatly.

To examine this issue in greater depth, the Asia Society recently hosted a phone briefing for its corporate members with experts from the law firm Arnold and Porter. Providing consultation from Arnold and Porter were Samuel Witten, a corporate compliance specialist and former legal advisor at the State Department, and Kristen Ittig, a partner in the firm’s Government Contracts Group, both of whom recently coauthored a report on human trafficking. Their comprehensive discussion, which included consideration of implications and steps to be taken by the private sector in ensuring trafficking’s eradication, is embedded below.