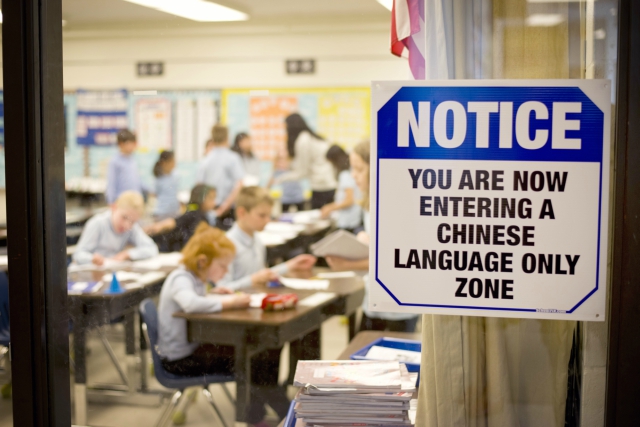 The ability to speak multiple languages is usually framed as a practical advantage — one that may help a person achieve professional success. But the benefits of multilingualism go well beyond. Speaking multiple languages can serve as a core part of any person's education, cultural identity, and sense of self.

In his new book New Ways of Seeing, Chris Livaccari, a senior advisor for Asia Society's China Learning Initiatives, makes an eloquent case for language learning as more than just communication. It's also, he argues, a means to enhance and deepen students' capacity for processing information and analyzing the shape of the world.

What motivated you to collect your insights and thoughts from your experience as a language teacher, and now as a principal, and make them available to the public?

I’ve always felt that the primary incentive for learning a language should be aesthetic. I think most language educators come to the profession because they love languages and culture, but they are constrained by a system that is interested primarily in language as a tool for communication, especially for business and other professional purposes. The unfortunate tendency in U.S. education is to think of world languages as an add-on, something that is nice to have but not essential. That's why I think what we need is a fundamental change in consciousness that generates interest in multilingualism for its own sake.

I remember as a child watching Carl Sagan’s PBS series Cosmos, which had a tremendous impact on STEM education in the United States. Sagan made science exciting and interesting to people and his mantle has been taken up by people like Neil deGrasse Tyson. That’s what I think we need for languages — a way to get people hooked on the idea that it’s boring to speak only one language and that there is a richness of thought and experience that can only be accessed by a multilingual. People with only one language are in a way handicapped in their ability to think and conceive of the world.

I’ve taught both Chinese and Japanese and watched as the demand for one (Japanese) rapidly plummeted after the 1990s, and the demand for the other (Chinese) increased exponentially. The takeaway from this should not be that those students who learned Japanese in the 80s and 90s were wasting their time. Learning a language as different from English as Japanese expands students’ ability to think in different ways and see things from multiple perspectives. The brain training they get from this experience — particularly from learning a language with a writing system as complex as Japanese — is absolutely invaluable.

This is why I am troubled by arguments that are often made that English is the only language one needs to communicate with the world. That made be so, but it’s also the case that learning another language trains the brain in ways that are not reproducible in other learning contexts. So being monolingual can be seen as akin to illiteracy, innumeracy, or a lack of cultural or scientific literacy.

Can you tell us a bit about the process of how this book came together?

The book really started from an interest among several colleagues in bringing together some of the ideas I’ve been writing about for Asia Society over the past six or seven years and constructing a more coherent statement about language education in the 21st century. It’s my attempt to ground my vision for language teaching and learning in a broader theoretical framework.

Do you feel that language instruction in the U.S. is in need of disruption? If so, why, and what part does New Ways of Seeing play in making that change?

I think what we need is to empower teachers to bring their love of languages — the beauty of the sounds and structures — to what they do in the classroom. That means building language learning experiences that teach skill sets, not just content. 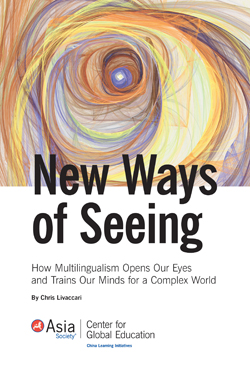 This kind of revolution has already happened in most other subject areas. If you look at inquiry-based learning or Singapore math, you see the rise of approaches to thinking about those disciplines that privilege skills over content. We need to help our students become effective language learners — and veritable “linguists and diplomats” — rather than just teaching phrases, grammar, and vocabulary. Helping students see patterns within and across languages, learning about linguistics, about phonology, and the ways in which different languages articulate different strategies of communication is so important.

I think most language teachers don’t have time to do these things effectively because they have to move through curricula and textbooks that are all about the acquisition of vocabulary and grammar. At the end of the day, the ability to recognize patterns and understand the nuances of how languages work will pay dividends going forward and actually accelerate the process of learning another language effectively. This should be our focus going forward. It's the old adage about giving a person a fish vs. teaching her how to fish — we should be doing more to teach our kids how to learn languages by giving them the analytical and conceptual skills to think about them in sophisticated ways and to develop the tools to rapidly acquire new words, patterns, and strategies of communication.

If New Ways of Seeing could concretely change just one aspect of K-12 language instruction in the U.S., what do you hope that would be?

I would like to see language programs that are less tied to the exigencies of politics and economics. Just because German and Latin may not be in particularly high demand for business purposes right now does not mean that there is no value in learning those languages. Remember Japanese — it was the “language of the future” in 1990, but now being replaced in many schools and districts by Chinese or other languages considered more useful or of the moment. I’d also like to see more integration of linguistics as a discipline into language teaching and learning, and a more sophisticated approach to learning about culture, which can sometimes be stuck in the all too superficial "food and festivals" mode.

Who do you think stands to benefit from reading this book, and in what way?

The book is really for anyone who wants to think about the ways in which we teach or learn languages — so that’s students, teachers, and parents for sure. And I hope that even people without a special interest in this subject might find value in appreciating the language learning experience in a different way. I hope to inspire and delight, in addition to hopefully teaching something meaningful.

For more of Livaccari's writing for Asia Society, check out his author page. And from last August, here's Chris and Asia Society's Jeff Wang writing about President Trump's use of language in Foreign Policy.