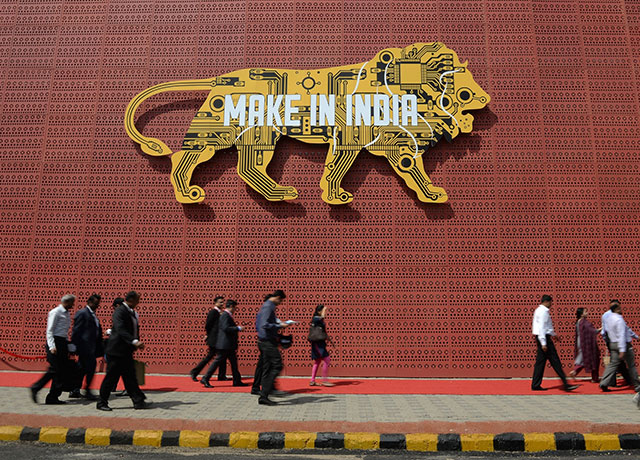 Visitors walk past one of the pavilions of the 'Make in India Week' in Mumbai on February 14, 2016. Over 190 companies, and 5,000 delegates from 60 countries, are taking part in the first 'Make in India' week held in Mumbai from February 13-18. (Indranil Mukherjee/AFP/Getty Images)

India, currently Asia's third largest economy, is projected to become the world's third largest by 2030, as its middle class swells to 450 million people. But according to Kevin Rudd, president of the Asia Society Policy Institute (ASPI) and the former prime minister of Australia, the country's economic potential would be more easily realized if it were better connected to other markets. In an op-ed published on Monday in the Business Standard, Rudd argues for India's membership in the Asia Pacific Economic Cooperation (APEC) forum:

On March 3 at 6:30 PM, Asia Society New York will present "The U.S. and India: 2016 and Beyond," an annual event focusing on the economic relationship between the two countries. Learn more

India has even more to gain from APEC, which would help India boost its long-term growth. APEC's institutional processes of trade facilitation, consultation on standards, and sharing of best practices will help India improve its regulatory regime and business environment. This, in turn, helps make India more attractive to investors and more competitive in international markets. APEC would help India access the transnational supply chains that increasingly dominate the global economy, an objective critical for Prime Minister Narendra Modi's plan to create 100 million manufacturing jobs by 2022.