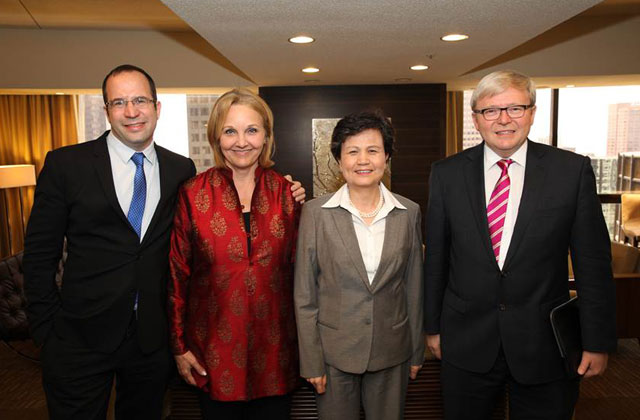 On an autumn day in 1971, in a small Australian town, Kevin Rudd's mother handed him a newspaper. The headline announced the China had joined the United Nations. The impression it left on him led him to a lifelong study of Chinese language and culture. That small, but catalytic act might have had an impression on the world. Rudd later became prime minister of Australia and one of the founders of the G20, and helped avert a global economic depression.

Rudd, now a senior fellow at Harvard's Kennedy School, spoke last night before an audience of 1,200 educators at the National Chinese Language Conference in Los Angeles, California. [Video of his complete talk embedded below.] At Harvard, his work is defined by three questions: Is a new strategic relationship between the United States and China possible? Can it be inclusive of the values of both societies? And what would it look like?

As his work at Harvard gets under way, he spoke primarily about the danger of mutual misperceptions between powers such as China and the United States. Rudd cautioned against these commonly held myths about China:

Rudd ended his remarks with a truth. He told the audience of educators that it is their work foremost — above that of statemen — that drives the future of the U.S.-China relationship. Teachers build bridges "of the future, to the future."