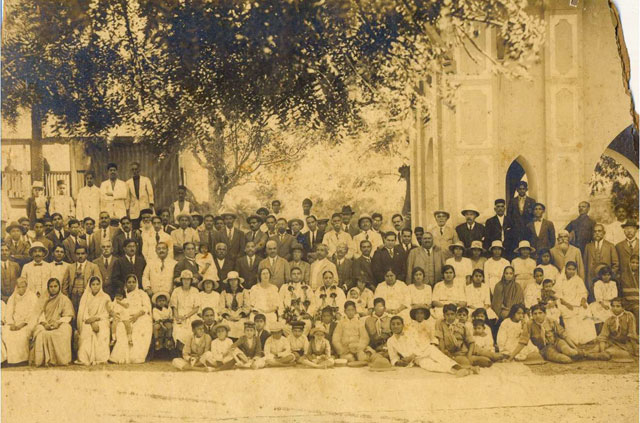 Jewish community of Karachi, Pakistan, outside the Karachi synagogue, early in the 20th century. (imgur.com)

Unfortunately, Pakistan’s actual record on minority rights stands in sharp contrast to the symbolism reflected on the Pakistani flag.

Last year, a minority rights group ranked Pakistan as the sixth-most-dangerous country in the world for minorities. While the rights of minorities, including minority Muslim sects, are under near-constant threat in Pakistan, the most captivating and underreported story about minorities in Pakistan pivots around the Jewish community, which has virtually disappeared from Pakistani society.

At the beginning of the 20th century, Karachi alone had about 2,500 Jews engaged as artisans and civil servants in the city. In 1893, the Jews of Karachi built the Magain Shalome Synagogue, and, in 1936, one of the leaders of the Jewish community, Abraham Reuben, became the first Jewish councilor on the Karachi city (municipal) corporation.

A number of Jewish organizations catered to the needs of Karachi's Jews. The Young Man's Jewish Association, founded in 1903, was established with the purpose of encouraging sports as well as religious and social activities. The Karachi Jewish syndicate, formed in 1918, was created to provide homes to poor Jews at a reasonable rent.

Even though the majority of Pakistan's Jews lived in Karachi, a small community served by two synagogues also lived in Peshawar. After the founding of the state of Israel in 1948, violent incidents against the small Jewish community forced an exodus of Jewish refugees to flee to India and Israel. Incidentally, Magain Shalome — Karachi's synagogue — was demolished in the 1980s to make way for a shopping plaza.

The history of Jews living in Karachi is neither preserved nor remembered in Karachi today. Instead, Jews have become a favorite punching bag of the religious right as they habitually invoke a "Jewish conspiracy" to explain away the failures of the Pakistani state.

The story of the disappearance of Jewish community within two generations serves as a dangerous precedent for other minority groups currently struggling to fight for their rights, in the face of violence, discrimination and forced conversions.

A recent surge in violence against minorities — be they Hindu, Christian or the supposedly non-Muslim Ahmadis — has enabled Pakistan's civil society to thrust the plight of minorities into the national spotlight, sparking a conversation about tolerance and religious harmony.

Last month, a group of students attempted to inspire a discussion about Karachi's long-lost Jewish heritage with a short play, The Lost Jews of Karachi, performed at the Alliance Francaise de Karachi. The play revolved around two Jewish sisters struggling with the decision to abandon their ancestral hometown (Karachi) and move to Israel. In the final scene, the sisters are separated at the railway station as they attempt to flee. One of the sisters misses the train, and remains behind in the city — as the other manages to leave Karachi forever.

Video
"Cemetery of the Lost Tribe," a documentary short about the the Jewish cemetery in Mewa Shah, Karachi.