Kaiser Kuo on Baidu, Foreign Reportage, and the 'Paradoxes' of China 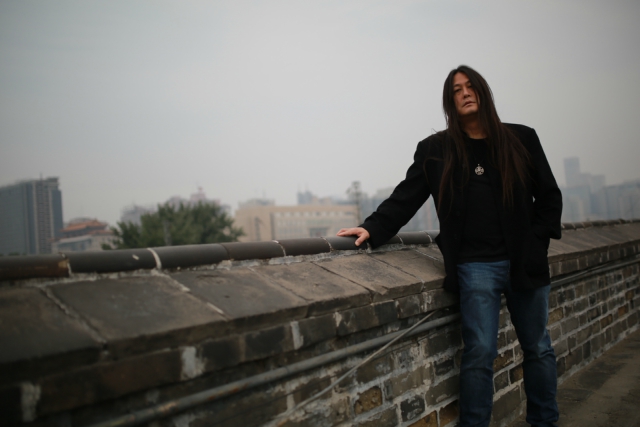 Since moving to China in the 1980s, Chinese American Kaiser  Kuo has found himself in a number of roles serving as a living intersection of culture, identity, and the times. As a founding member of the iconic heavy metal group Tang Dynasty, he changed the way many Chinese thought about music. He later became a prolific writer and host of the popular Sinica Podcast — which has became an influential voice on politics, society, and economics in contemporary China. Now, he's preparing to leave China and his job of six years as director of International Communication at Baidu, China's largest internet search engine.

On May 4 in San Francisco, Kuo will be among those Asia Society Northern California presents with leadership awards for "revolutionizing the way people live, consume, socially interact, and civically engage." As he prepares to move back to the United States after two decades in Beijing, Kuo spoke with Asia Society about foreign reportage on China, "paradoxes" he sees in the country, and what he plans to do next. An extended version of this interview first appeared on the Asia Society Northern California Blog.

From a member  of  the rock band Tang Dynasty to your current role at Baidu, your  personal and professional projects  have spanned many different areas. What is your current  top priority?

I’m winding down work at Baidu right now, having had a terrific nearly six-year run there. I’m very fortunate that a passion project that Jeremy  Goldkorn  and I launched just before I joined the company — the  Sinica  Podcast — will now become my professional focus. In May, our podcast will become part of a new China-focused startup based out of New York, and they will be publishing  Sinica  starting in mid-May. I’ll be trying my best to produce a better, tighter, and slightly more polished show.

On the personal front, this means a relocation to the U.S. after 20 continuous years in Beijing. For the first year at least, as we settle into a new home in the Raleigh-Durham-Chapel Hill area of North Carolina, my plan is to write a series of essays that I hope to publish as a book, with 20 essays corresponding thematically to the 20 years I’ve been in China. And this being an election year, and North Carolina a battleground state, I hope to get involved and show my kids by my example what participatory politics in America is all about.

Your earlier work  seemed  centered on  your observations of  dualities and contrasts  in China.  What are  some of the themes  or narratives  piquing  your interest  now?

I’ve always been fascinated with the relationship modern Chinese people have with their own history, and one of the main dualities, if you will — really quite a paradox — is the way that, on the one hand, Chinese seem so freighted by history, or so caught in its gravitational pull that achieving escape velocity seems very difficult; And yet as we’ve all seen, Chinese people are also able to turn on a dime and practically reinvent themselves. They’ve been able to absorb dramatic historical change with admirable equanimity. So while in the morning I can state with confidence that Chinese people are among the most burdened by history, the most conscious of its weight, I can assert with equal assuredness that afternoon that they’re among the most free from it. I’m interested in the way that the fraught relationship with history forms so much of the Chinese worldview, whether for the leadership, for intellectuals, or for ordinary people.

Another paradox of sorts that really intrigues me is that China has been, arguably, the greatest beneficiary of globalization during the last 35 years or so: Its development model was in some ways ideally suited for the era of the shipping container and commoditized electronics. But China has also been the country that has suffered the ravages of globalization the most. Environmental degradation, sudden and very pronounced income inequality, the crisis of ethics and a rapid descent from a high-trust to low-trust society — all these can be seen as side effects of globalization. China is where the rubber meets the road on globalization, and how it plays out here will probably matter more than whether a Bernie Sanders or a Donald Trump or another anti-trade politician wins the White House.

As an early entrant to China’s innovation wave, Baidu serves as an online portal for consumers in China.  How has Baidu leveraged this role to affect Chinese society?

At a very fundamental level Baidu exists to expand the information horizon for ordinary Chinese internet users. It’s not perfect, and can’t always be done to the extent we’d all like, but the company has to work within certain parameters. The senior management of Baidu are very serious about their mission to provide the best and most equitable way for people to find what they’re looking for, and they do all they can.

Equitability of access has always been a priority, whether it’s in creating the most naturalistic and intuitive interfaces — recently, we’ve made enormous strides in AI-based speech recognition, that can understand even quite heavily-accented regional dialects of Mandarin — or in making teaching materials used in top Beijing and Shanghai schools equally available to rural teachers and students.  Baidu has also contributed immensely to the development of the public sphere in China. China-watchers focus on Weibo and, more recently,  Weixin  when they talk about China’s online public sphere, but let’s not forget Baidu  Post Bar, which was and is still very much the place where the national conversation is happening — the place from which so many of the memes and themes emerge.

On  Sinica, you've interviewed dozens of foreign correspondents over the years. How has the picture that foreign reportage paints of China evolved since you’ve been there? What do you think is being over-emphasized or under-emphasized?

This is an enormous topic so I’ll just limit my comments to a few things. Foreign correspondence on China has obviously improved in many ways: More reporters on the ground representing an ever-greater number of media outlets covering a wider selection of stories, more journalists with Chinese language skills and generally deeper background on China’s history, and of course with the internet, much more data to draw on. There are things to be improved, and some of it is quite fundamental and boils down to differing views on the mission of foreign correspondence. While speaking truth to power and reporting what “the man” — whether governments or big businesses — doesn’t want reported is the right approach when covering domestic stories for a domestic media market, we have to remember that in a domestic market (say, the U.S.) the readership can be assumed to have much of the context already. They live there. The whole paper is filled with stories on America, too, so those mud-raking pieces, those exposés on malfeasance by some politician or company, can be seen in proportion to all else that’s happening.

But when you’re writing about a country on the other side of the world, I believe your mission has to change, because the readership back home simply doesn’t have the context, and doesn’t get a sense of proportion. When your paper has a very high proportion of strongly critical stories, the readership’s idea of that place becomes skewed. And so we end up with a real disconnect: China, to some notional middle American reader, becomes a place where there’s nothing but political and religious repression, toxic air, venal officials, crass nouveaux riches, and heavy-handed censorship.

One area I think that gets particularly over-emphasized to the detriment of the readership and its grasp on the big picture in China is critical intellectuals. Naturally, it’s the more vocal, strident critics from among the intelligentsia who are more willing to talk to the press, and their evident moral courage makes them appealing as subjects for reporters. They’re championing our values, and fighting for our ideas of justice. This leads to a real disconnect, though, that I’ve encountered in many, many intelligent Americans who come to China after being exposed to so many profiles of courageous dissenters: Why, then, am I encountering all these educated, intellectual Chinese who are supportive of the CCP, or only mildly critical?

As a pioneer of dialogue and perception building between the U.S. and China, in which direction do you hope the next wave of critical correspondents and cultural advocates will go?

I’m a big believer in the power of direct contact, and anything that encourages more Chinese to study, live, work, and travel in the U.S. and encourages, conversely, more Americans to study, live, work, and travel in China is good for enhancing mutual understanding. That doesn’t mean we’ll all be holding hands and singing kumbaya. There’s plenty that we will profoundly disagree on, that we’ll find disagreeable about one another. But we’ll be better able to handle our differences.

Speaking just of Americans now, I used to really think that the mutual understanding problem could be largely abated if only Americans better understood China’s recent past — that a basic course in Chinese history and a few books would really go far to ameliorating all this misunderstanding and animosity. But I’ve come to believe that the problem — and here again, I’m speaking of Americans, and Chinese have perceptual shortcomings aplenty — is that we don’t recognize the historical unlikelihood, the utter contingency, of our having developed the marvelous institutions of liberal democracy we enjoy. With few exceptions, we subscribe — even if unconsciously — to a teleological view of history that sees it all leading inevitably to the wonders of modern democratic capitalism. But just as a teleological view of evolution is fundamentally incorrect (no, the story of evolution is not about inexorable progress toward bipedalism, sentience, and meta-consciousness), it’s just as wrong to believe that history has some end or purpose in mind.

We forget what was involved in getting here, how many lucky throws of the dice, how many things had to be just so for things to work out as they did. Many of us, born on this side of the historical chasm that separates the liberal democracies of the developed West from, say, the Iran of the Mullahs, or Putin’s Russia, or Xi’s China, or even ISIS, just wonder blithely why they all don’t just come on over and get with the program. The problem of course is that now we’re all packed into this common present, where we know in an instant what happens in places quite far away. But the physical distances are bridged much more quickly than the historical ones. An appreciation of just how difficult the crossing can be, and how the gravitational pull of history can make it truly difficult to attain escape velocity, would help us to find more constructive and effective ways of bridging history.