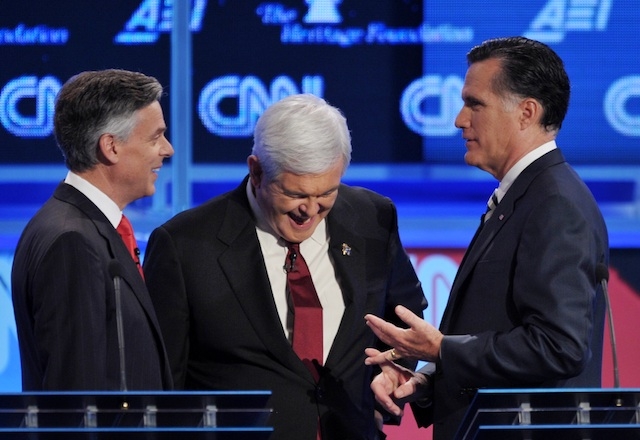 On paper, Jon Huntsman and Mitt Romney have a lot in common. They are both Mormon. They are both former governors. They are both fathers to large broods of attractive children. And they both wanted to be the 2012 Republican candidate for president. But when it comes to their views on China, that's where the similarities end.

Huntsman — who appears in conversation with David Shambaugh tonight at 6:00 pm ET in Washington, D.C. (watch the free live webcast at Asiasociety.org/Live) — gave up his post as U.S. Ambassador to China in order to launch his failed White House bid. The jury is still out on how Romney will fare in November, but one wonders whether he'd want someone like Huntsman as his man in Beijing. We've compiled a breakdown of the differences in the ways the two Republicans have framed their China positions.

The main China issue on which the two sparred during the primary debates was Romney's assertion that he would on "day one" of his hypothetical presidency label China a "currency manipulator" and attempt to impose punitive tariffs through the WTO (the Obama administration has just made its third WTO complaint of this year). In contrast, Huntsman not only opposes aggressive tariffs on the basis that they would "result in a trade war," but also expresses faith that "China will devalue its currency. It has for the last year to two years, and it will continue to. Why? Because it's in their interest."

Blame for the Economy

While Huntsman has insisted on avoiding the use of China as an easy scapegoat for America's complicated economic problems, Romney has preferred the much simpler line that "they're stealing our jobs." He reiterated his point in a recent ad that blamed China's "cheating" in the international market for the loss of U.S. manufacturing jobs, causing China's authorities to promptly point out that Romney has profited considerably from investments in companies relying on Chinese manufacturing.

The ubiquitous question of what the rise of China will mean for the United States has prompted contrasting rhetoric from the two former governors. While Romney has stated in a Wall Street Journal op-ed that it is possible for China to become a "tyranny" that "will increasingly pose problems for us, for its neighbors, and for the entire world," Huntsman takes a slightly less melodramatic approach, arguing that U.S. leaders should not view China's rise "through a prism of fear," but rather "work with China on shared interests" and "bridge the communication gap" in the near term.

Although Huntsman owes his Mandarin (and little-mentioned Hokkien dialect) fluency to his two years as a Mormon missionary in Taiwan and paid a visit there in July, Romney has been comparatively vocal on the issue of weapons sales to the island. Regarding the F-16 C/D aircraft that Taiwan has requested, a Romney aide stated in February: "Governor Romney strongly believes that we should sell Taiwan those air fighters," albeit without comment on whether or not he is willing to allow China to stall military relations with the United States as it did over weapon sales during the Bush administration.

Since endorsing Romney, Huntsman has toned down his down his criticisms of Romney’s increasingly tough China rhetoric, but he is still not afraid to voice his opinion when he disagrees. He has continued to call Romney's stance on tariffs "wrongheaded," and stated in a Wall Street Journal op-ed, in an allusion to his previous criticisms of Romney's oversimplification of the issues, that policymakers should "not engage in hyperbole or wishful thinking" when it comes to the U.S.-China relationship. However, Huntsman is playing nice for the time being. The Mandarin skills that he once used to tell Romney that he didn’t understand the U.S.-China trade relationship were recently used to endorse the candidate to Stephen Colbert.