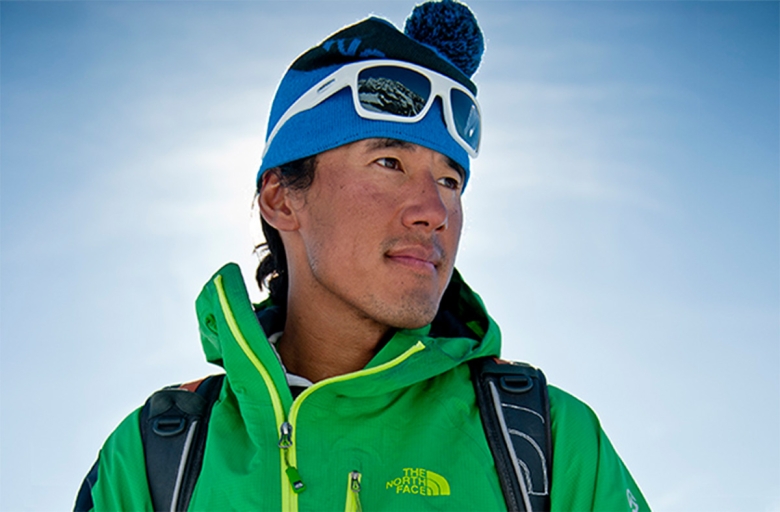 If one person could epitomize both “perseverance" and “adventure," it would be Jimmy Chin. The 43-year-old Taiwanese-American is a veteran mountain climber, photographer, skier, and filmmaker, one whose willingness to venture into uncharted territory has made him one of the world's most sought-after expedition photographers. For the past 15 years, Chin has been a member of the North Face Athlete Team and a photographer for National Geographic. He has also worked for Vanity Fair, Men's Journal, Outside Magazine, and Patagonia. Jimmy is the first American to ever ski down Mount Everest from its summit as well as the first to ascend Mt. Kinabalu, the highest mountain in Malaysia. His documentary film Meru, which details the how he and two other top alpinists reached the peak of a never-before-climbed Himalayan mountain, won the 2015 Sundance Film Fest Audience Award and was shortlisted for that year's Oscars. You can check out Jimmy's photography on his website and on Instagram.

Each May — and beyond — Asia Blog interviews noteworthy Asian Americans about their life, work, and passions. Check out the full archive.Learn more

In this conversation with Asia Blog, Chin, who is married and the father of two young children, talks about his upbringing, his documentary, and the best piece of advice he's ever gotten.

Your parents were typically Chinese in that they placed intense pressure and expectations on you growing up. How did think this upbringing led you toward your present career trajectory? How has your relationship with your parents evolved?

My parents placed a lot of pressure on me to do well in school and, really, in everything else. They set very high expectations but I found that my personal expectations of myself were often higher than theirs. So it’s hard to say if my drive and my career were shaped by my upbringing or if it was just the way I was born. It’s likely a combination of both. I do remember my parents always telling me if I was going to do something, I should do it well or not bother. I still think that all the time. I definitely appreciate all the different things they exposed me to from a young age — music, art, martial arts, swimming, tons of books, and lots of travel.

Originally, my parents were totally against what I chose to do after college. I literally moved into the back of a station wagon and lived like a homeless person while I pursued climbing and skiing. It took a while before they came to terms with the lifestyle I had chosen. I think the main turning point was when I published my first images in National Geographic. They were proud of that and I think they finally believed I could make a living doing what I was doing. I don’t resent them for being worried. As a parent now, I totally get it. They just wanted what every parent wants for their children — that they can take care of themselves on a basic level. Beyond that, of course, is to find great satisfaction in living full lives. Those are at least some of the things I want for my own children.

How do you decide which expeditions or assignments to pursue?

I’ve always leaned towards expeditions and assignments that I found most compelling or was passionate about. As a climber and skier, we’re often searching for first ascents or first descents, objectives that have never been done before.

There are multiple components to picking expeditions. First and foremost, I look for the right team. I want to do trips that involve exploring new places and also push my personal boundaries or the boundaries of what people think is possible. This often means trying to climb or ski something for the first time.

Aesthetics also play a large role in picking objectives. We are often looking for the most beautiful or inspiring line, whether that is to climb or to ski.

Your award-winning film Meru was an inspiring journey about perseverance and taking risks. What was your main takeaway from that experience?

My main takeaway was that making films is certainly as hard or harder than climbing mountains! I really had to apply what I learned in the mountains towards making films.

There are a lot of parallels. Both processes can be painful, filled with doubt, and require total commitment, incredible teamwork, and perseverance. I also find both to be extremely rewarding.

What lesson from your childhood do you hope to pass down to your daughter? When she becomes old enough, what is the first adventure you’d want her to experience with you?

I just hope she is curious about life and finds pursuits she is passionate about. I don’t worry too much about what they are — I just want her to live fully. We started skiing together when she was two and a half last winter. This winter, she skied almost 30 days. She’s three now, and it seems we’ve already started to have some adventures on the mountain.

I certainly don’t push her to go. (And, as you probably know, you can’t really force a 3-year-old to do anything.) She just loves skiing. I guess the apple doesn’t fall far from the tree.

Trust in the cosmos but tie your camel.