Japan's Victory: A Triumph Bigger Than the World Cup 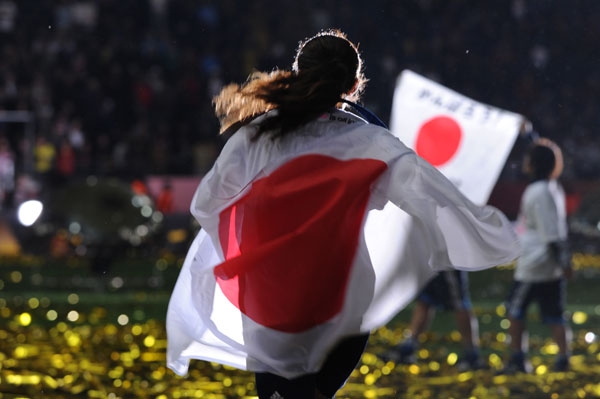 When Japan's women's soccer team fought back to a close victory against the United States in the World Cup final on Sunday in Germany, it broke a 26-game losing streak against the Americans. But the win was much more than just an underdog sports story, it was also a significant upturn for the nation's collective pride.

A woman standing in a crowded Japanese sports bar early Monday morning — the game began at 3:45 a.m. in Japan — called the win "the first uplifting national story in months" in a Washington Post article.

After this spring's earthquake and tsunami and all the horror that followed, the people of Japan have been mired in bad news, stuck in the political and radioactive fallout that followed the powerful tremors. Japanese Prime Minister Naoto Kan has been running a notoriously ineffective and weak government effort in the wake of the disaster, and just a week ago the newly appointed disaster reconstruction minister, Ryu Matsumoto, resigned after just a week in office following an embarrassing debacle in which he publicly scolded the mayor of a devastated area.

"When you have such perceived political ineffectiveness — pervasive at the moment — to have something like this, while perhaps it doesn't solve the problems, it gives people something that they perhaps can rally around and see as some good fortune that has happened," said Mike Kulma, Executive Director of Global Leadership Initiatives at Asia Society.

"After all the misery and the subsequent miscues, whether within Tokyo Electric Power or the different ministries or the bureaucracy and the leadership of Japan, now they have something like this to focus on. It certainly is one bright spot."

"[This] has reminded the country of its ability to persevere through tough times," Harney said. "As Japan continues to rebuild after the devastating March 11 disaster, the victory should be a reminder of the urgent need to explain opportunities for Japanese women, not only in sports but also in politics and the corporate world. Women in Japan still only earn 60 percent of what men do. There are twice as many women as a percentage of politicians in parliament in Afghanistan than in Japan. This week, the world saw firsthand how far Japanese women can go, given the chance."

Whether the World Cup triumph will boost the rebuilding efforts in Japan or make advances for Japanese women in the professional world remains to be seen, but the women of Japan's soccer team have certainly successfully delivered their own message to their countrymen.

"We thought, maybe if we play harder we can send that message to the people affected by the disaster," team member Homare Sawa said to The Independent. "That's how to survive — never give up."

Join Asia Society for Voices from the Ground: Civil Society Reports from Japan, a panel discussion on the current status of relief efforts in Japan, on Thursday, July 21st from 6:00 p.m. to 7:30 p.m. If you can't make it to the event, catch the live webcast on Asiasociety.org/Live between 6:00 - 7:30 p.m. ET. Online viewers can and are encouraged to send questions to moderator@asiasociety.org.