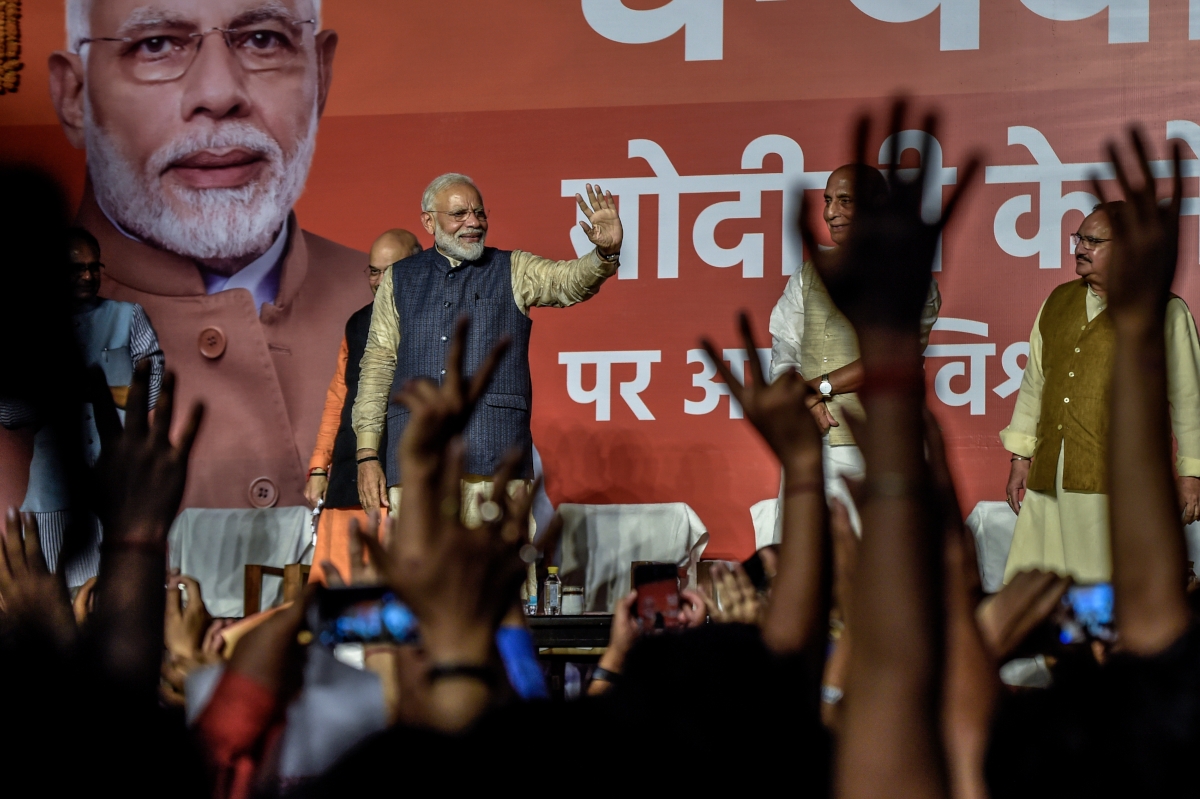 Narendra Modi speaks to the victorious party workers at the BJP party headquarters in New Delhi, India, on May 23, 2019. (Atul Loke/Getty Images)

On May 29, four experts on Indian politics discussed the country's recent election results in a conversation at Asia Society New York. Watch the program here.Learn more

In retrospect, the 2014 parliamentary elections that catapulted Narendra Modi and his Bharatiya Janata Party (BJP) to the Indian prime ministership, then seen as historic, were only the beginning. This week, Modi won a second term in office with a shellacking of the opposition that gives him an even stronger mandate to lead the country.

The victory was more decisive in every way. Consider this: The magic number to win India’s lower house is 272 seats. In 2014, the BJP secured 282 seats on its own and 336 seats with its coalition partners. This time, Modi’s party secured 303 seats on its own and 352 with its National Democratic Alliance coalition. In 2014, the BJP secured 31 percent of the popular vote but were able to gain a majority by narrowly winning a lot of races. This time around, the party garnered 37 percent of the popular vote, not counting its coalition partners — an impressive feat.

This is the first time in almost five decades that a party has taken power with solid majorities in consecutive terms. In doing so, Modi has reversed a long-standing trend in Indian politics since the 90s — the decline of major national parties. This year marked the strongest performance in a general election by a single party since 1984, when Rajiv Gandhi won a landslide for the Indian National Congress in the aftermath of the assassination of his mother and predecessor, Indira Gandhi. Modi is clearly the most powerful prime minister India has had in three decades.

What does this mean for India going forward?

Markets and the international business community were relieved by the decisive result — but much remains to be done on the economic front if India is to continue to grow quickly and create jobs for its fast-growing labor force. With elections looming, Modi shirked away from economic reforms over the past year, so it will be interesting to see if he’ll use his newfound political capital to craft a new economic reform agenda. One policy area which requires special attention is trade, where the Modi government has been protectionist. There is little indication yet that Modi plans a different approach in his second term, but the international community continues to hold out hope. If nothing else, Modi has proven that he is a leader of action.

Modi is clearly the most powerful prime minister India has had in three decades.

On the foreign policy front, Modi’s victory means that India’s approach to the world will remain consistent. During his first term, Modi had been successful in deepening ties with several key countries, including Japan, the United Arab Emirates, Saudi Arabia, and, at least momentarily, the United States. He was less successful in relations with India’s two primary rivals — Pakistan and China. Relations with Pakistan are at a nadir after the Pulwama terrorist attack in February, which led to a brief military tit-for-tat between Delhi and Islamabad. Relations with China were equally rocky for much of Modi’s first term, in particular during a 2017 crisis along their shared border. Though Chinese President Xi Jinping and Modi stabilized the relationship at the Wuhan Summit last year, they have made scant progress in addressing the key drivers of competition and rivalry between Asia’s two major powers.

The one area where a Modi victory might spell trouble is in the health of Indian society. Modi ran a decidedly nationalist campaign, one adorned in the saffron flags of Hindu nationalism. The first Modi term had a chilling effect on journalism, civil society, and independent institutions, with the government cracking down on criticism and increasingly imposing itself on the levers of power and influence in India. Minority communities, especially Indian Muslims, have watched warily as the government has failed to loudly and quickly denounce, much less combat, communal violence. The big question now is how Modi will take advantage of his strengthened political mandate. Will he feel secure enough to give up dog-whistle politics and focus on governance? Or will he double down on shaping the social-cultural contours of India along the lines of his Hindu-nationalist creed?

The only person who knows the answer to these questions is the prime minister himself. With a second term comfortably in the bag, we are likely to see the real Modi emerge now that the campaigning is over and the hard work of governing continues. Either way, it’s Modi’s India now.

On May 29, four experts on Indian politics discussed the country's recent election results in a conversation at Asia Society New York. You can watch the program below.