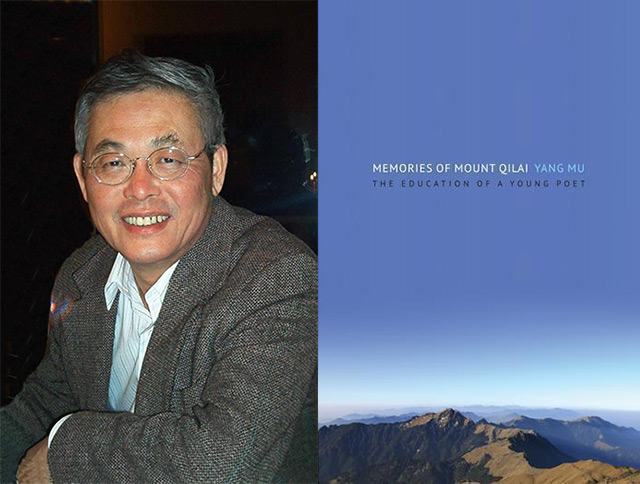 Yang Mu and his book Memories of Mount Qilai: The Education of a Young Poet.

Yang Mu is a prominent Taiwanese poet, essayist, critic, and translator and was winner of the 2013 Newman Prize for Chinese Literature. He is the author of more than two dozen prose and poetry collections and has taught at the University of Washington and National Donghua University.

Earlier this year, Yang published the English translation of his autobiographical essay collection Memories of Mount Qilai: The Education of a Young Poet. The essays are largely focused on the author’s childhood in Hualien, on the Pacific coast of eastern Taiwan. These personal narratives also tell the story of Taiwan’s extensive social, political, and cultural changes in the twentieth century.

Yang Mu spoke with Asia Blog about his book.

You first received attention for your poetry. What inspired you to start writing the essays found in Memories of Mount Qilai? How have your poetry and prose influenced each other?

From the beginning, I believed that writing in both verse and prose would be the most effective way by which I could define my thoughts and gauge my imagination. I suppose I never regarded the essay as a literary form that was necessarily inferior — in terms of art or craftsmanship — to the poem, and this is especially true when the writing is executed in Chinese.

Your writing in Memories of Mount Qilai captures a critical and complex time in the history of Taiwan and of East Asia in general. What made Hualien such an effective backdrop for exploring the historical themes in your essays?

I did not choose Hualien to be the backdrop of the book. It was the only place I, as a boy, knew of a little within the context of Taiwan, which happened to be undergoing all those conflicts and wars, the disasters I realized in retrospect carried out in several languages.

In your writing, you reflect on your interactions with Hualien’s indigenous people during your childhood. What do those encounters mean to you?

The experience I had with the indigenous people during my childhood is indelible, and in fact, I have always taken it as something to cherish and be proud of. The few passages I devote to describing them and their culture, as I can remember now, tell of my impressions of them from early childhood, and my lasting admiration.

Could you talk about the story behind how the English translation of Memories of Mount Qilai came together?

Professor Goran Malmqvist, the Swedish Sinologue, read it first in Chinese and suggested to John and Yintsih Balcom to translate it into English. I was given a chance to read through the typescript before it went to the Columbia University Press. The book was published with a subtitle added on, “The Education of a Young Poet.” I like it, perhaps for its German allusion.

How have you seen the Taiwanese literary landscape evolve during the course of your career? How would you characterize it today?

You’ve had a rich career so far as a poet, essayist, and scholar. Looking back, what have been some of the most rewarding moments?

I guess I take it as most important to my career to be able to identify, and in effect, define a style for my writings in different genres, individually and collectively. I teach the classics to college students and write new literature on my own