Interview: What an Aging and Shrinking Population Means for Japan | Asia Society Skip to main content

Interview: What an Aging and Shrinking Population Means for Japan 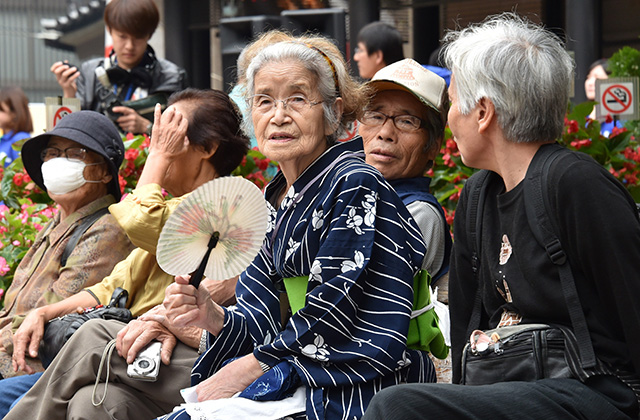 Elderly Tokyo residents rest in a temple on September 15, 2014 as the country marks Respect for the Aged Day. (Yoshikazu Tsuno/AFP/Getty Images)

Japan is facing a double demographics dilemma. Rising life expectancy and falling fertility are combining to make it the fastest aging nation in the world. Today, over a quarter of the country’s population is over 65 years old — a proportion that’s poised to grow to 40 percent by 2055. Over the same period, the overall population is expected to shrink from 127 million to 90 million as the number of deaths continues to outpace births. The resulting raft of social and economic side-effects are already beginning to create major challenges for Japanese society.

Roger Goodman is a head of Oxford University’s Social Sciences Division, and for 30 years has researched the education and welfare system of modern Japan. His work has yielded several books, including A Sociology of Japanese Youth (2011) and Ageing in Asia (2007). On July 15, he’ll be speaking at Asia Society Hong Kong about Japan’s unprecedented demographic shift. Ahead of his talk, he spoke with Asia Blog about some of the domestic and international implications of this shift.

What sort of effect is Japan’s demographic transition having on its youth?

In many ways, young people in Japan are benefiting hugely. Classroom sizes are getting smaller and there is an excess of places in universities. In theory, there is no competition for university places overall, but of course competition for places in the top universities remains very tough. Even though there has been economic recession for two decades, there has been little growth in overall unemployment because of the demographic transition. On the other hand, it has been very difficult for young people to find permanent stable and long-term jobs.

How might Japan’s shifting demographics affect other nations in the region?

There are likely to be many impacts on Asian neighbors from Japan's demographic transition. For example, many of Japan's universities are facing bankruptcy because of the lack of students. As a result, they are seeking to attract students from Asian neighbors to fill the excess places and offering generous incentives. In the future, it is likely that there will be major underemployment in Japan. As a result, companies will be seeking to recruit from Asian countries.

Do you envision Japan substantively relaxing immigration policies to make up for this shrinking workforce?

There is no doubt that Japan will have to relax its immigration policy in order to be able to meet its future labor needs. We can already see signs of this in the number of care workers from Indonesia and the Philippines who are employed in Japan. There is little doubt that these types of specialist labor immigration programs will increase over the next few years and that the society will gradually become accustomed to increased levels of immigration, especially from neighboring Asian societies.

What other policies are being enacted to mitigate the fallout of the aging/declining population? Are there any policies that haven’t been enacted that you think could help?

There have been many policies implemented to try to encourage women to have more children. These stretch from advertising campaigns encouraging men to take a more active role in childcare, to policies to create more preschool childcare places so that it is easier for women to remain in, or return to, work after they have started a family. There is also evidence that societies where young people cohabitate — either before marriage or before they have children — tend to have higher fertility rates. Cohabitation is unlikely to become a government policy, but if cultural norms changed in this respect, it would probably increase the number of children born.

Are there any political implications of an aging Japanese society?

In some ways, the aging of society is forcing Japan to become a more liberal society as it becomes increasingly exposed to foreign cultures. Care workers from oversees, for example, have proven very popular with the residents of care homes, and employers have been pressuring the government to relax immigration regulations for such workers.