Interview: Western Convert on the 6 Types of Chinese Hard Liquor You Should Try | Asia Society Skip to main content

Interview: Western Convert on the 6 Types of Chinese Hard Liquor You Should Try 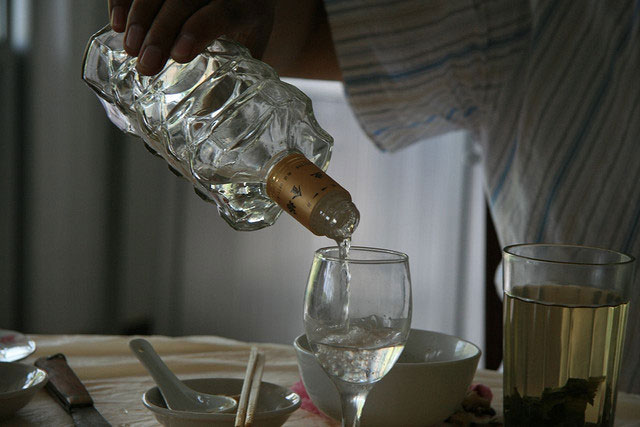 Earlier this summer, The Economist published data showing that the world consumed roughly 27 billion liters of alcoholic beverages last year — and China accounted for 38 percent of it. However, the most popular Chinese drink didn't make the top 10 world rankings because baijiu, a type of distilled alcoholic drink that accounts for 99.5 percent of all spirits consumed in China, isn't consumed anywhere else.

Meanwhile, recent government reforms discouraging luxury spending have many Chinese baijiu makers seeing losses this year. Some speculate that they will try to market their product to international consumers.

But as of now, they have one small problem — nobody wants to drink it.

"I thought it tasted like paint-thinner and felt like a liquid lobotomy," Michael Pareles, manager at the U.S. Meat Export Federation in Beijing, told Reuters.

"Make no mistake, this is a singularly repellent spirit," wrote China-based American writer Derek Sandhaus on his blog, 300 Shots at Greatness, where he has been chronicling his determination to learn to love baijiu since 2011. Today Sandhaus has made a name for himself as a baijiu expert and connoisseur. We asked him to shed some light on what makes this beverage so popular in China and what chance (if any) it has in a Western market.

It seems that some international beverages such as red wine and whiskey are getting more popular in China, but baijiu remains more widely consumed by far. What is it about this drink that makes it so popular?

Yes, there is impressive growth in foreign alcohol exports, red wine in particular, but baijiu remains by far the most popular spirit consumed in China. The reason for this is threefold: First, baijiu is a traditional Chinese drink associated with traditional Chinese celebrations and holidays, as well as business and politics. Second, in its more expensive iterations, baijiu confers a degree of prestige upon the drinker. This aspect drives the purchase of baijiu in the gifting context. Additionally, baijiu can be as high-quality and refined a spirit as any found elsewhere, although its taste profile may be better tailored to local preferences than foreign spirits.

Some foreigners drink baijiu in China, although most do so for business purposes. That said, I believe there are an increasing number who drink baijiu because they enjoy either the flavor or the experience. Unquestionably, there is a growing interest in baijiu in other countries, as reflected by its visibility in international media and the number of businesses that have begun to sell baijiu overseas.

You're known as a baijiu expert and connoisseur. Most foreigners seem to hate this drink. What makes you different?

I don't know that there is anything that makes me particularly unique besides persistence and perhaps a bit of masochism. When I started writing about baijiu, I was among the skeptics and I didn't care for what I had tasted. My goal was to discover what it was about baijiu that allowed Chinese to enjoy it, and I am relieved to say that I succeeded.

I think the biggest obstacle to baijiu appreciation is a fundamental misunderstanding about what baijiu is. It is not, as most believe, one spirit, but rather a blanket term that encompasses all traditional Chinese spirits, which can be as dissimilar as vodka and rum. Once you know that, it becomes a simple matter of finding the type of baijiu most suitable to your tastes.

What differentiates the high-end baijiu from the cheap stuff?

Do you think that baijiu has the potential to catch on in the West?

I do. At the baijiu tastings I have hosted for foreigners, I have found a willingness to accept certain types of baijiu. Certain modifications may be necessary in terms of strength and consumption method, but there's nothing inherent to the product that should bar its entry into Western markets. Most of the international spirits you'll find at Western bars today — vodka and tequila, for example — were once considered undesirable foreign spirits. It will take time and education, but baijiu can catch on.

Given the vast differences in flavor and price, Sandhaus has provided us with a sampler of six different types of baijiu ranked by price and deliciousness. Baijiu beginners might want to start with a "light aroma" while the more adventurous can go straight for the $325 bottle.

Kweichow Moutai Feitian — RMB2,000 ($325) — Sauce aroma
The so-called "National Liquor," Moutai is a long-time Party favorite, but the price-tag scares away most. Moutai is currently experiencing massive discounts in China, so now may be the right time to try this complex, soy-smelling blend.

Jiannanchun Jiu – RMB400 ($65) — Strong aroma
Mianzhu-based Jiannanchun is, along with better-known Wuliangye, one of the pioneers of the five-grain method and by far the most reasonably priced for the quality. Distilled from sorghum, rice, glutinous rice, wheat and corn, it has a rich but well-balanced flavor.

Xinghuacun Laobai Fenjiu — RMB100 ($16) — Light aroma
Shanxi-based Xinghuacun Distillery is the standard bearer of the Fenjiu style (named for nearby Fenyang). Less abrasive than other sorghum-based baijiu, this is a good choice for both baijiu beginners and enthusiasts.

Kathleen Caulderwood is an Asia Blog contributor and freelance reporter. She has lived in India and China, but is currently based in New York City studying at the CUNY Graduate School of Journalism.
@katcaulder