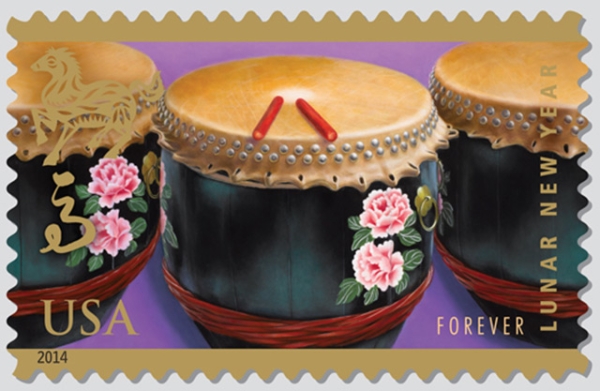 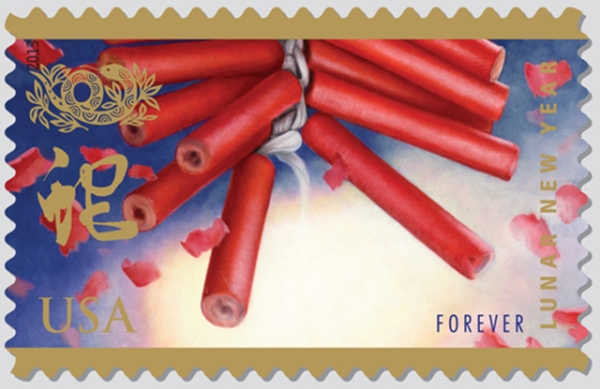 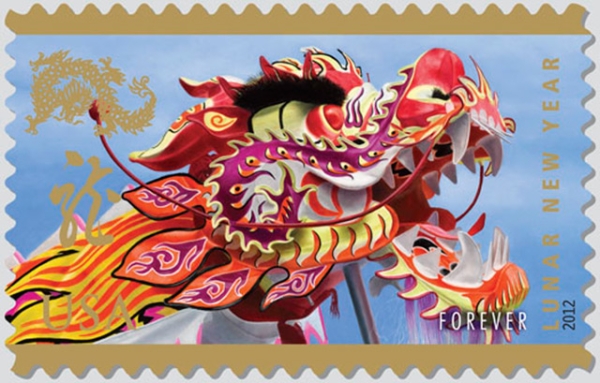 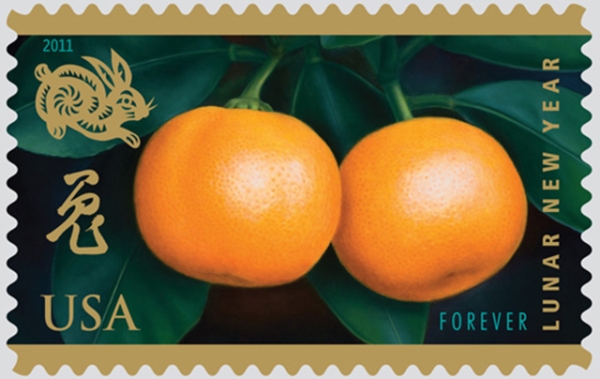 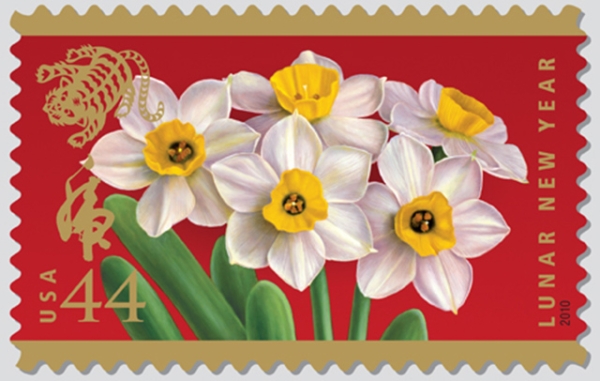 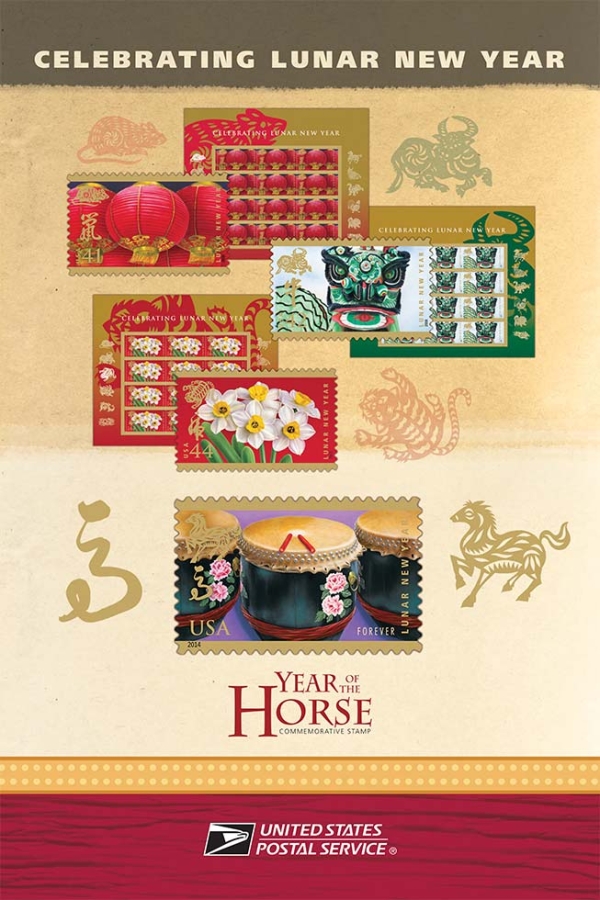 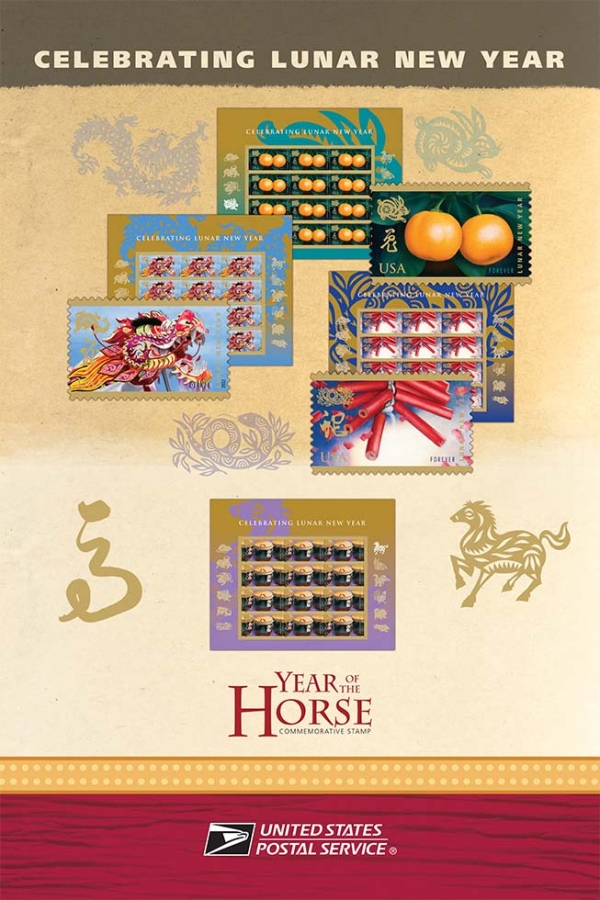 The price of a first-class stamp may have recently increased to 49 cents, but that shouldn't dampen the spirits of those looking to add some festivity to their mail — because earlier this month, the United States Postal Service released its Year of the Horse Stamps as part of a 12-stamp series, Celebrating Lunar New Year.

Combining the paper-cut designs and calligraphy of previous Lunar New Year stamps, this new series prominently features a set of drums and red drumsticks by Brooklyn-based illustrator Kam Mak. Mak, who illustrated the previous six stamps in the series and is slated to create the next five, showcases the color and life of Lunar New Year celebrations, incorporating various traditions into his designs.

After moving to New York City from Hong Kong in 1971, Mak found his love of illustration early and has since created over 200 paintings for book covers and editorial pieces for clients such as National Geographic, Time magazine, Random House, and the New York Times. In 2001, he published My Chinatown: One Year in Poems, which celebrated his own experiences as a young boy growing up in New York City's famous ethnic enclave, and received a starred review from Kirkus Reviews. With several other accolades to his name, such as the Stevan Dohanos Award from the Society of Illustrators and the Asian American Dynamic Achiever Awards of OCA-Westchester & Hudson Valley Chapter, Mak draws on his experience in his current role as a professor at the Fashion Institute of Technology and as a guest lecturer at various public schools and institutions.

Tell us a little about how you were first introduced to the arts and illustration. Where do you draw your inspiration from?

I've always loved to draw. I grew up in Hong Kong and migrated to NYC with my parents in 1971. I struggled with school, not knowing the English language, so art classes were the only subjects in which I excelled. I had wonderful art teachers throughout my public school years who nurtured and supported my talents.

I was introduced to mural painting in middle school by an organization called City Art Workshop. I loved it. The professional artists I met in City Art Workshop taught me how to paint large-scale murals and inspired me to pursue higher education in the arts. I received a full scholarship to School of Visual Art, where I graduated with a BFA. It was also my first introduction to illustration, which is the format used for my limited-edition Celebrating Lunar New Year Forever stamp series for the U.S. Postal Service.

My works are influenced and inspired by many things, but most of all my Chinese culture. Other cultures and time periods that I draw inspiration from are the works of the Dutch masters and paintings from the Italian renaissance.

How did your upbringing in Chinatown influence your work?

Chinatown has had a big influence on my work. I even wrote and illustrated a children's book about the life of a Chinese boy growing up in Chinatown titled My Chinatown. Chinatown has so much energy, vibrant colors everywhere you look and endless exciting imagery to inspire me as an artist.

Conversely, describe for us the impact that your career as an illustrator and the designer of this stamp series has had on your relationship with the Chinatown community.

Designing the Celebrating Lunar New Year stamp series has given me a unique opportunity to showcase my beautiful culture to the world, through my art. I learned that the Chinese community in Chinatown is very proud of the Lunar New Year series. Similarly, they are very proud that a kid who grew up in Chinatown is the artist who created this latest series for the U.S. Postal Service.

How do you incorporate your heritage into the Celebrating Lunar New Year stamp series?

What are some key elements in your designs that speak to what Lunar New Year means to you?

The zodiac animals are still used in my Lunar New Year series design, but it is not the central subject. For instance, this year I used the traditional Chinese drum to adorn the limited-edition Year of the Horse Forever stamp, the seventh in the series. The drum is the iconic instrument that we use to usher in the New Year. When I hear the percussion of this drum playing alongside the traditional lion dance, it inspires and uplifts my spirit for the New Year. You could also associate the rhythm of the drum to the rhythm of the horse running. It is about the determination and energy that both give off.

As families around the world prepare for Lunar New Year celebrations, what are some of your favorite LNY traditions?

My favorite tradition as a kid was receiving the red envelope with money stuffed inside. My fondest memory is helping my Grandma set up the narcissus bulbs on a shallow dish right before the New Year. Then there are the firecrackers. Now that I am married and have a family of my own, my favorite tradition is the Lunar New Year eve dinner at my mother's apartment in Chinatown. I love the Chinese sausages and salted duck.