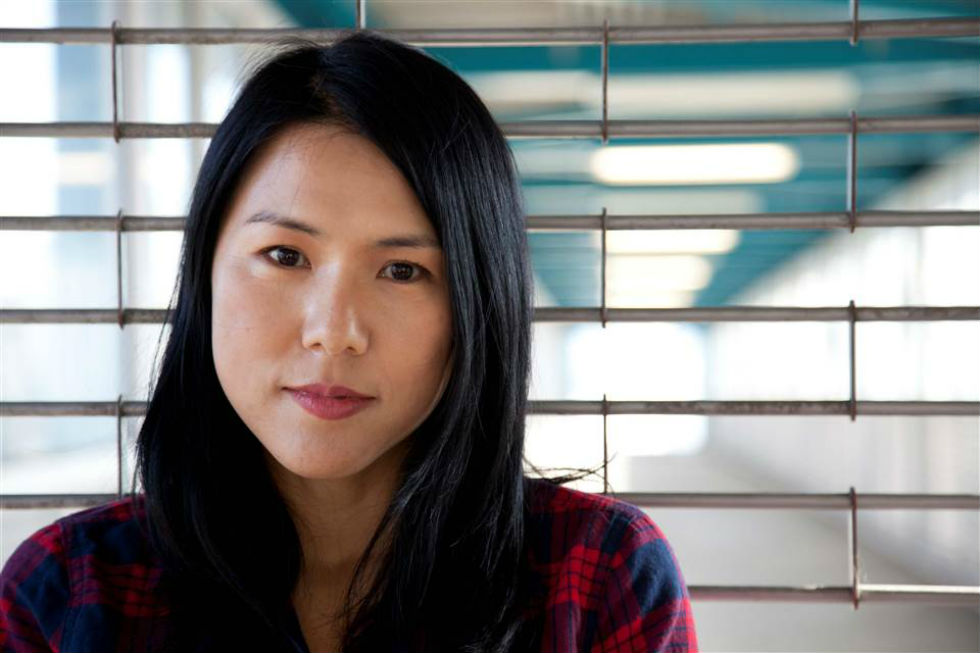 In 2011, Korean-American author Suki Kim took a job teaching English at the Pyongyang University of Science and Technology (PUST), a private, all-male university in the North Korean capital. Most of Kim’s students were from Pyongyang’s elite class, positioned to become the future leaders of North Korea. During her six months in Pyongyang, Kim secretly took notes about her experience, which she chronicled in her memoir Without You, There Is No Us (Crown, 2014).

In collaboration with the World Affairs Council of Houston, Asia Society Texas Center is pleased to welcome Kim for a discussion of her book next Wednesday, March 25. Leading up to the event, Kim spoke with Asia Blog via email about her time in Pyongyang, her writing process, and her interactions with her students.

You worked on your book “undercover.” What did you do to make sure your project was kept secret? What was most challenging about it?

Since my goal was to reveal the truth behind the façade, full immersion was my only option. North Korea allows foreigners very little access, and too often the articles that emerge from those visits read more like press releases for the regime than journalistic truth. When I learned about PUST (Pyongyang University of Science & Technology), a university staffed only by foreigners, I realized this could be an unusual opportunity to get behind the curtain and stay there longer than a few days, so I applied for a job there. (No teachers were paid any salary.) It seemed worth the risk, and the result was that I was embedded among real North Korean students, eating meals with them three times a day.

The most difficult part was being watched around the clock, never being left alone. Even when I was physically alone, I knew that I was being watched and reported on. Each meal, each class, each conversation — there was never a private moment. Losing privacy so absolutely is an alien experience. In some ways, I was amazed by how quickly I adapted to it, because I had no choice. If I hadn’t been able to accept that reality, I would have had to leave.

On March 25, Asia Society Texas Center presents a Young Professionals program featuring a discussion with author Suki Kim about her memoir Without You, There Is No Us, in collaboration with the World Affairs Council of Houston. Learn more

What surprised you about your classroom experiences?

My students were so easy to love, and yet also impossible to trust. They were innocent and yet corrupt. They were sincere, but they also lied so casually. They were the future leaders of North Korea, mostly from Pyongyang, and yet they were so clueless and sheltered in their upbringing that they sounded like children from a small village. It took a while for me to understand and accept these paradoxes, but ultimately, living in a walled compound with them and sharing so much — from eating meals together and playing basketball to laughing at inside jokes — I fell in love with them all.

In turn, what surprised your students about what their interactions with a foreign teacher?

Living alongside the foreign professors in such a small campus, they could only question their system, because now they had a point of comparison. Because they lived with us, they could only have felt a lack that they might not have been aware of. Even if they had been aware, they might not been able to explain what that lack consisted of — information and freedom. The powerlessness they had been used to all their lives might suddenly have felt like a handicap.

You also wrote about the technological backwardness of the university. Could you tell us a bit more about kind of access students had (or didn’t have) to technology?

Most of the students were computer majors, but they had never heard of Mark Zuckerberg or Steve Jobs. Most of them had no idea when the first computer was invented. They thought their Intranet, a censored network of pre-downloaded information, was the same as the Internet. At this school of science and technology, these students didn’t know when the first man walked on the moon, and they would make non-scientific claims such as how basketball makes them grow tall.

Your book is part of a growing conversation of international writers working in North Korea. What are other books you’ve found illuminating?

A book that stands out to me is The Aquariums of Pyongyang by Kang Chol-hwan. Kang was born in Pyongyang and is a Zainichi Korean who was imprisoned in North Korea’s Yodok concentration camp from the ages of 9 to 19, beginning in 1987. His book is one of the first first-hand accounts of defection from North Korea. Kang is now the executive director of the Seoul-based North Korea Strategy Center, a think tank focused on North Korean issues.

You’ve also written The Interpreter, an award-winning novel. How have your experiences in writing both fiction and nonfiction informed each other? What do you enjoy most about each genre?

Humanizing North Korea was always my goal, and to do that, literary nonfiction was the only way. It’s journalism, all based on notes and investigation, but I also had to deliver a human world, which required the literary part of a novelist that would add depth. For North Koreans to become real, I had to write in a personal tone, and I, Suki Kim, as a part of the book, also had to be bared open — which is why in the book I am incredibly vulnerable. Because this experience goes back to my family history and heartbreak of the Korean division, there was a depth of honesty I had to get to. I had to shed layers and layers and layers in order to be as honest as I could be in the writing. I had to break down the distance between me, the narrator, and the subject of the book, North Korean people, which then caused the distance between the reader and the material.

It was extremely difficult to be in North Korea. I cry a lot. I talk about the love interest or the difficulty of break-ups, things like that. The division of Korea was not just North and South. It’s millions of people missing each other. It’s mothers missing their sons and not being able to go to sleep, which is what I saw from my family. So it was really important that I had to miss someone, too. I was not just a journalist looking at my North Korean students as subjects; I was also experiencing a life of my own. Baring myself to the reader took a lot of effort.

What’s next for you? How are you staying up to date on North Korea, and are there any forthcoming projects you can share about with us?

I am writing from Vancouver, Canada where I just gave a TED talk. I've been on a book tour since the publication, and in that time, I have written a few articles about North Korea. I am still too buried in this book to pull myself out of it emotionally for another long project, but I am trying.

A special thank you to Rose Rogeau, Senior Director of Communications at Asia Society Texas Center, for her assistance with this article.