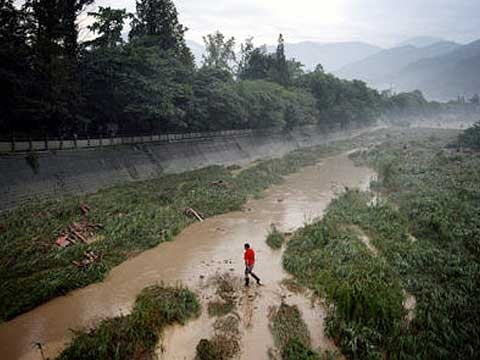 What was your inspiration for taking on this project and why is this issue important to you?

In 2009, I spent nearly two months traveling across China documenting the challenges related to desertification, which is gripping the north and the west of the country. After completing this work, I really wanted to follow it up by focusing on more of the country's water issues. This naturally led me to look into the state of the country's wetlands. After a little research, I discovered that there were many worrying trends across the country and that the wetlands of the country were in a terrible state. Like the issue of desertification, wetlands disappearance has been very much underreported. They are both issues which require in-depth reporting and piecing together of multiple issues. I felt it was extremely important to try and "connect the dots," in order to help people understand why all these issues are intrinsically connected to one another.

Why are China's wetlands shrinking? What are the causes?

The major cause of wetland disappearance in China in recent decades has been a result of man-made clearance. This has occurred for a number of reasons but it is directly tied-in with economic growth and population increase. In China's northern Heilongjiang province for example, over 75 percent of the wetlands have been cleared to make way for farmland. It's an area which has fed China's burgeoning population through the creation of rice paddies, converted from wetlands. It's a trend that can be seen in many areas of China.

What is the impact of China’s shrinking wetlands on the environment and do you believe this trend can be reversed? If so, how?

There are numerous impacts on the environment, as a result of China's wetlands disappearance. One of the most stark and vivid is the impact upon biodiversity. The Chinese Alligator for example, historically found throughout the lower reaches of the Yangtze River, has now been also completely eradicated from the wild. The last survey counted only 120 individuals. Lake and pond reclamation in the 60s and 70s severely reduced its natural habitat. Coupled with poaching, this species has been pushed to the brink of extinction in the wild. There are numerous other species which have suffered a similar fate.

I believe for many areas, the trend is irreversible. Land that has already been converted in function from wetland to farmland, will remain so as long as there is increasing demand for the food that that land now provides. China is setting up more and more reserves across the country, however many of these are just in name and there are still numerous threats upon these "protected" areas. Similarly, captive breeding programs are underway to save some species, however for many of those species there is no natural habitat left for them to be reintroduced to.

What was your perception of the issue when you first started the project? Looking back, how have your views changed?

When I began this project, I understood that the wetlands of China were in crisis but I don't think I actually realized the scale of the problem until I began traveling around the country and seeing the issues with my own eyes. Having met countless locals, scientists, journalists and officials and hearing their worries, I actually think the scale of the problem is worse than I initially realized.

How did you decide to approach this project technically? How much emphasis did you put on, say, photography vs. video vs. time-lapses? And why?

I'm primarily a stills photographer, however in the past couple of years I have embraced multimedia as a way to explore new ways to help my audience understand these issues better. I think that by using photography, video and techniques such as time-lapse photography allows me to give viewers a new outlook to these issues.

Each ingredient to the multimedia piece has equal weight and value, always complementing the other techniques. I don't want to use an effect, such as time-lapse, just as a gimmick because it looks interesting. I use it for a reason. Normally, to help show events or processes that couldn't be shown using a single still photo or video. By bringing different techniques together, I think we have a powerful tool to help people look at old issues in a new way.