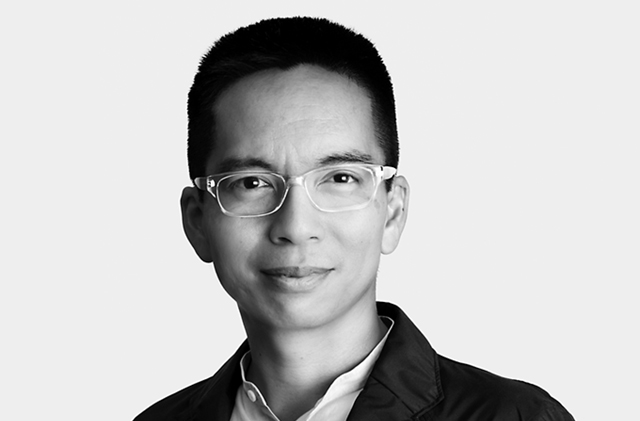 John Maeda is a well-known, ever-present iconic figure in the computer science and design world. He is hard to categorize since over a long career he has been known as a technical innovator, graphic designer, leading educator and speaker, author of books that are standard references for students and peers, plus much more. Since 2008, he has been the president of the Rhode Island School of Design, one of the nation's top design schools. He is constantly advancing innovative ideas and inspiring the younger generation.

Born in Seattle, John received Masters' degrees in engineering and computer science at MIT and a PHD in Design Science from University of Tsukuba Institute, where he says he "rediscovered mind, paper and pen.” Prior to RISD, he was the Associate Director of Research at MIT's Media Lab for 12 years. Currently, he is a trustee of the Smithsonian’s Cooper-Hewitt National Design Museum, member of the TED Brain Trust and a permanent part of the collection at Museum of Modern Art.

Being Asian American, did your cultural upbringing affect or guide the trajectory of your past and current career disciplines? Are there any specific experiences you could share?

I grew up in a family-run tofu shop in Chinatown in Seattle, Washington. It was later more appropriately renamed the politically correct "International District" — which when you really think about it, is a bit absurd because there weren't any Euro-shopping opportunities there (smile). Being around many Asian influences — specifically Filipino, Chinese, Japanese, Korean — influenced me profoundly because I could see many cultures interacting at once as a minority population within the United States, and then to feel that difference played out when I attended public school in the predominantly non-Asian contexts of the suburbs of Seattle in the '70s. I became comfortable with being different, and learned to notice the value of sharing differences among cultures.

I also noted the friction that often occurs across differing lines of thinking — the power to recognize "us" as one united people often is rooted in defining everyone else who doesn't "get" us is by successfully defining a "them" in unsavory terms. The result often isn't pretty.

Perhaps my being conscious of living across differences — whether to end up bridging art and math, or to bridge Asian and European sensibilities, or to bridge design and technology, or to bridge creativity and business — are all logical outcomes of my upbringing as an Asian American. One who is neither fully at home in Asia nor fully at home in his home of America. But fully at home as the bridge that connects the two together through his actions and existence.

Serving on the World Economic Forum's Council on New Models of Leadership has helped me see how integrating my experience as President of Rhode Island School of Design with my previous post as head of research at the MIT Media Lab has shaped my experience as a leader who bridges the qualitative and quantitative factors at hand. But my Asian upbringing often comes into play the most in my role as a leader, and in my ineffable identity as an Asian American leader. I often quote Lao Tzu's definition of leadership:

A leader is best
When people barely know he exists
Of a good leader, who talks little,
When his work is done, his aim fulfilled,
They will say, "We did this ourselves."

It is a definition that is certainly losing popularity in the modern Asian world, and is a foreign concept in most spaces today. But I love this definition because it epitomizes what my immigrant father conveyed to me through everything that he did as the leader of my family. I related his unique approach to generosity that I wrote about in a blog post here.

STEM programs (Science, Technology, Engineering, and Math) are instilled by the U.S. Department of Education and National Science Foundation. Since 2012 you have been heading the STEM to STEAM campaign to gain federal support for incorporating the A for "Art" into STEM, with creativity and design being integral to education and innovative thinking. How has progress been going and have there been any major challenges and breakthroughs you've encountered?

I am delighted that we were able to play a small role in working with Representatives Suzanne Bonamici and Aaron Schock in the bi-partisan STEAM Caucus launch. There are now representatives from 22 states on board to reveal the importance of art and design education in economic development. American companies like Apple and Boeing distinguish themselves with design as a differentiating factor, and are long-term beneficiaries of stronger art education in K-12. Please visit stemtosteam.org to get involved.

Are there any Asian Pacific American figures whom you currently admire, and why?

I was definitely inspired by Jeremy Lin when he was in the press a lot last year. Here's a short blog post on how he inspired me.

Your Twitter page has a large following, and you disseminate a lot of fresh insightful quotes on your page, from yourself and other leaders. How do you come across these soundbites that end up creating a unique inspiration board? (Plus, how do you find the time?)

I am fortunate to get to be in touch with a lot of interesting people, venues, and moments. It's easy for me to forget what I might have learned or thought on any given day, so I use Twitter as my public notepad. Like a public diary, I guess.

From time to time I will look at what I thought or saw in prior years or months on Twitter. And I am always struck by how little I remember and how much I have to learn and re-learn.

As for the time I expend on posting to Twitter or to my blogs, I always tell myself that one day I won't be able to post to those channels because I'm too busy. But then I will be in an elevator, or caught in the back row of an auditorium, or stuck in a checkout line somewhere — and there it is. Time! So I will use it when I have it. And I then quickly switch back to my primary work at hand. As I will do now. Now that I have answered your questions ... back to work for me.