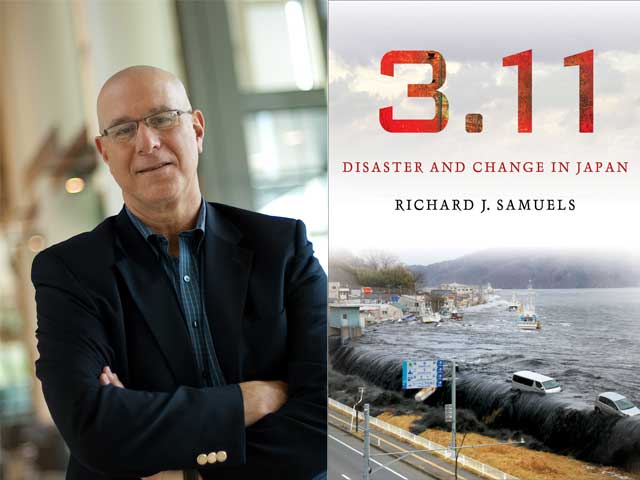 Two years ago this month, the Tōhoku earthquake and tsunami struck Japan, leaving over 15,000 dead and ravaging the country's northeast. Over the following days, in the midst of a massive response and recovery effort, reactors at the Fukushima Daiichi Nuclear Power Plant melted down.

While the tsunami and its aftermath are unlikely to be forgotten, two years later, recovery is well underway. With that recovery comes critical questions. What should Japan learn from its trauma? How effective was the response? Who was responsible for the shortcomings?

The answers to these questions remain contested. Voters went to the ballot box to elect a lower house of parliament for the first time since the earthquake on December 16, 2012, and replaced Japan's leadership, returning to office Prime Minister Shinzo Abe and his Liberal Democratic Party.

In his forthcoming book, 3.11: Disaster and Change in Japan, Japan scholar and MIT Professor Richard Samuels explores the political and societal implications and impact of the events of March 11, 2011. In an interview with Asia Blog, Samuels discusses his book and the changes and continuity he has seen over the past two years. (Look for an excerpt from 3.11 to run on Asia Blog on March 11, the second anniversary of the disaster.)

What lasting impact do you think the March 11, 2011, earthquake and tsunami will have on Japanese life and Japanese politics?

Of course nothing will ever be the same for those who lived through the catastrophe along the Sanriku coast — especially for those who lost their homes and family members. The lasting effect on Japanese social life more generally and on its politics is less clear. It seems to me that there are two ways to think about this. Optimists see 3.11 as the moment when opportunities were seized to re-energize civil society and to enhance transparency in the policy process. The enormity of the tragedy notwithstanding, pessimists say that 3.11 was not big enough to compel changes to national institutions. There is evidence to support both views, but I was struck by how inflated many of the grandest predictions were — e.g., that 3.11 would stimulate a "civilizational transformation" or that a new chapter in Japanese history would begin. An insistent flood of extravagant claims dominated the 3.11 discourse, and Japanese politics and society certainly were rattled. The discourse was filled with reaffirmations of community and social solidarity. But the political world was not "reborn," nor was national life "reset."

In your book you describe Japanese leaders who responded to 3.11 by seeking 1) accelerated change, 2) a sustained status quo, or 3) a course reversal. You argue the second group won out. Why do you think this is, when 3.11 seems to the outside world to have been such a transformative event?">

Political actors spun stories to help make sense of the disaster, always in ways consistent with what they already knew to be true. Those who thought the utilities were villains before 3.11 insisted that 3.11 proved their point. Those who believed the ruling Democratic Party of Japan was a collection of incompetent parvenus before 3.11 now claimed to have additional evidence to make their case. Supporters of the Japan-U.S. alliance and of the Japanese military renewed their claim that they were right all along to insist on the importance of the postwar military arrangement — Japan and the world now had "proof of concept" after 3.11.

We observed a continued, albeit intensified, competition among political actors armed with a new tool, the disaster itself. As Karl von Clausewitz might have framed it, 3.11 was simply the continuation of "normal" politics by additional means. The status quo ante was the result of normal politics, and, as I show in the book, despite all the tumult (including extraordinary efforts by local governments and volunteers) and despite some policy shifts, normalcy prevailed. Japan would not become more muscular, it would not alter its system of local governance, and it would not abandon nuclear power. It was not nudged in a new direction.

You spent a year in Japan researching this book. Did you expect to find greater shifts?

The best way to get at this is by confession. At the outset of the project I imagined that 3.11 would loosen constraints on changes in policy and politics that many had long sought. I arrived in Japan in May 2011 with a working title “Rebirth of a Nation?” and console myself by remembering that I had at least included a question mark! Within three months, struck by the way policy entrepreneurs of different stripe drew different lessons from 3.11, I changed my working title to "The Rhetoric of Crisis." I was struck by how few policy actors changed their preferences after the catastrophe. With rare exceptions — the most notable being Prime Minister Naoto Kan, who shifted from an advocate to an opponent of nuclear power — if you knew the preferences of a political leader prior to 3.11, you knew those preferences afterwards—and could predict the narrative they would construct to explain the catastrophe and prescribe solutions.

A new Japanese Prime Minister has recently visited the United States, with the slogan "Japan is back" and with a message of economic reform. What role do you think 3.11 played in the political shift in Japan? Has what you've seen from the new government changed any of the perspectives you shared in your book?

One can make the case that there was an indirect effect of 3.11 on the December election — the third landslide victory for one or the other major party in less than a decade. To do so, you would have to assume one of two things: first, that the Japanese people accepted the relentless villainization of the DPJ and its handling of the crisis while they discounted the villanization of TEPCO and its supporters in the LDP. Prime Minister Kan, and later to a lesser degree, his successor Noda Yoshihiko, were routinely demonized in the media for incompetence. TEPCO and the so-called "nuclear village" were demonized for greed and insouciance. The former accusations, however inconsistent they were, stuck. The latter did not.

Alternatively, one might look at the lowest voter turnout in postwar history and conclude that the Japanese electorate was exhausted and driven to indifference. Even though support for nuclear power among the general public is very low, they did not turn out to support the anti-nuclear Tomorrow Party of Governor Kada Yukiko, for example. Ten million voters stayed home. If they had turned out at previous levels and were divided along the lines of the general population on the nuclear power issue, the pro-nuclear LDP might have faced a stiffer challenge.

Did 3.11 change any of the dynamics in the U.S.-Japan relationship?

The alliance has never been held in such high regard as after Operation Tomodachi. Despite the warmth of the moment and the profound amity that the mobilization of 20,000 U.S. troops generated, immediate politics and longer-standing concerns both have shaped the subsequent U.S.-Japan relationship. Japan's struggles over basing issues, for example, and its timidity vis-à-vis implementation of emergency coordination mechanisms in the face of a 2012 North Korean missile launch revealed a persistent lack of confidence in security policy and, perhaps, in the alliance that Operation Tomodachi did not seem to ameliorate.

There is no evidence that the U.S. response was calculated as a matter of "disaster diplomacy," which is good, since there has been no appreciable "Tohoku dividend" for the alliance. As one official told me, the U.S. knew going in that there would be "no withdrawals from the Bank of Goodwill." This is probably as it should be, but still, uncertainty and policy gridlock on force realignment and trade issues continue to weigh down alliance policymaking more than Operation Tomodachi helped.