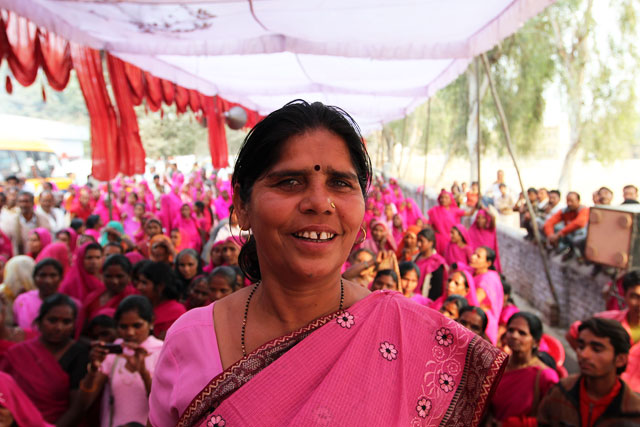 Born in a poor rural household in the Bundelkhand region, also known as the "badlands" of India, Pal was married off at the tender age of 12 and pregnant with her first child by 15. With no formal schooling and limited economic opportunities, Pal could easily have resigned herself to her fate, like many other Bundelkhand women. But her keen sense of social justice elevated her to a larger calling, driving her to organize an army of women into the Gulabi Gang in 2006.

In Hindi, gulabi means pink. Pal chose the color because it was free of any religious or political associations in India. The Gang primarily addresses issues of domestic violence, rape and forced marriage and, although equipped with large bamboo sticks, they seldom use them. Instead, their actions focus on pressuring police to register and investigate cases, organizing protests, raising awareness and providing support to women at risk.

In her first book, Pink Sari Revolution (W.W. Norton, 2013), Pakistani-Irish author Amana Fontanella-Khan narrates Pal's journey and the Gulabi Gang's creation through their crusade for 17-year old Sheelu Nishad — a housemaid raped by her employer, a powerful Indian politician, who then had her thrown in jail on false theft charges. When Pal learned about Nishad's plight, she took up her cause and the Gulabi Gang successfully campaigned for her release and the conviction of the teenager's crooked boss on rape charges. In a region notorious for widespread corruption, Nishad would probably have languished in jail while her influential employer roamed free had the Gulabi Gang not stepped in.

Fontanella-Khan has written widely on gender issues in such outlets as The New York Times, Slate and The Daily Beast, and spent two years researching and writing the book. While the injustices highlighted in Pink Sari Revolution are jarring, Pal's story illustrates how a courageous group of women can bring about real change despite the magnitude of the odds against them.

Via email, Fontanella-Khan discussed with Asia Society her experiences of living in Bundelkhand with the Gulabi Gang, how men are supporting Pal's crusade and the movement's biggest challenge. 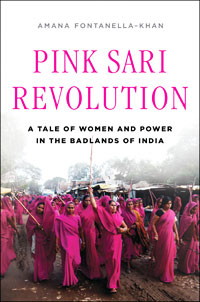 What inspired you to write a book on Sampat Pal and the Gulabi Gang?

I felt it was important to tell a story about women in India that focused less on victimhood and more on victory and success. The Gulabi Gang is inspiring and represents hope, which is something people are always in need of. I also was attracted to the universalism of the Gang's message, which resonates far beyond India. In fact, people from all walks of life and parts of the world benefit from seeing how disadvantaged, marginalized people can make a change. Whether we look at the Occupy movement, Gezi Park in Turkey or the Arab Spring, what we have seen in the past few years is that ordinary people can have a big impact.

You spent two years researching and writing the book and lived in Bundelkhand for some time. What were some positive and challenging aspects of that experience?

Living in Bundelkhand was a memorable experience. I tasted life in rural India, which I was far removed from in the urban jungle of Mumbai. I even picked up Hindi, for which I am hugely grateful. Best of all, however, was spending time with extraordinary people. The Gang has left a deep impression on me, to the point where I feel more courageous and bold about confronting things like street harassment than I had in the past.

The biggest challenges when I was out there were the poor infrastructure, the heat and the busy schedules of the Gang members, around which I had to arrange my interviews.

The Gulabi Gang seems like a very unique idea. Are you aware of any comparable movements in other countries?

There are many women's groups across the world fighting on the battle lines for women's rights in unique and interesting ways. The Afghan organization RAWA (Revolutionary Association of the Women in Afghanistan) is one example and Femen, the Ukrainian group, is another case. However, I have not come across any group that is comparable to the Gang outside of India.

How are men supporting the cause of the Gulabi Gang?

Their biggest support is by not being obstacles. Every husband who lets his wife freely join the Gulabi Gang and participate in its protests and activities is supporting the group. Some men even finance the organization. One character in my book, a man called Deepak, is married to a Gulabi Gang district commander and regularly funds local operations.

In your opinion, what is the biggest challenge facing the Gulabi Gang going forward?

One of the biggest challenges will be succession. The Gang heavily relies on Sampat, who is both the founder and commander-in-chief of the group, and it is very unlikely that it would survive without her at the helm. Sampat will need to raise future leaders but she has found it hard to find the right woman to pass the baton on to. Another challenge is whether the Gulabi Gang will survive if Sampat enters into politics, which she is attempting to do.

What key messages would you like audiences to take away from the book?

The most important message is that people are not slaves of their destiny. Oppressors can be defeated through unity, courage and perseverance.