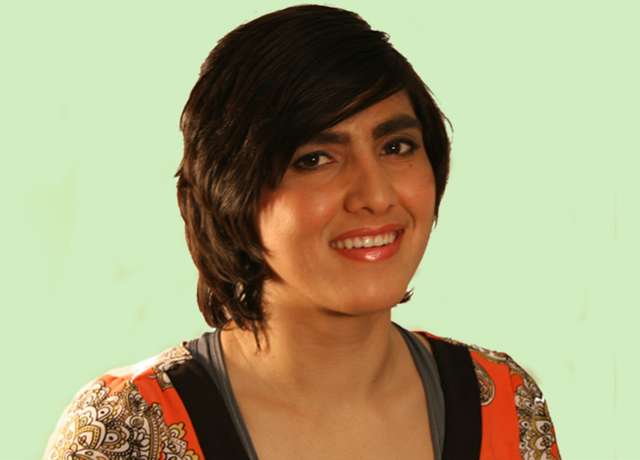 Maria Toorpakai is a Pakistani squash player, currently ranked #53 among the world's women players. She was born in South Waziristan, an extremely conservative region of Pakistan along the Afghan border that is often referred to as the ground zero for some of the region's most dangerous extremist groups, including the Pakistani Taliban. As a child, encouraged by her father, Shamsul Qayyum Wazir, an outspoken advocate for women's rights, Maria cut her hair short, dressed like a boy, and called herself "Genghis Khan" in order to play sports with other boys. After her family moved to Peshawar when she was 12, Maria would often accompany her brothers to the squash stadium to watch them play, and it was here that her interest in the sport was ignited. However, in order to join the squash academy, she had to show officials her birth certificate, which revealed her actual gender. Over the next few years, she received so many death threats from self-appointed guardians of public morality that she took to practicing only at night.

Realizing that she was putting her family's safety in great jeopardy by staying in Pakistan, she started writing hundreds of letters to various squash academies abroad. One of them reached former squash champion Jonathan Power, who was so intrigued by her story that he invited her to train at his institution, the Power Squash Academy in Toronto, Canada.

From her base in Toronto, Maria recently communicated with Asia Blog about her childhood in South Waziristan, the popularity of squash in Pakistan, her new life in Toronto, and her future aspirations.

Can you tell us a little about your childhood growing up in Waziristan and what ignited your interest in squash?

I had a very different childhood than any other girl in Waziristan. I was a tomboy and since the age of four, chose to live as freely as boys did in that area. I did not want to be confined to the house like the girls in that area and culture were. I did not want to live with such limitations nor limit my true abilities before even discovering them.

I was very lucky in that I had an extremely supportive father and a loving mother and siblings who all loved me just as I was, rather than trying to make me into something I did not want to be. My family has always been my strength.

By dressing and behaving like a boy, I was able to discover the area, the culture and the differences between the life of a girl and of a boy more so than any other girl in Waziristan could.

Because I was quite naturally physically and mentally strong, most people didn't suspect I was a girl. I used to do all the chores that boys were meant to do, like bringing groceries, milk from the dairy from other villages, firewood and water. I also had to learn how to clean the house and to cook on a fire from the age of six, as sometimes my parents and some of my siblings would have to go to Peshawar for my mother's exams and my sister's debating competitions. All those chores helped me to grow up a strong woman.

Weightlifting was my first sport, but there was a squash club close to the weightlifting area, and that is how I first became acquainted with the sport.

Squash is the second-biggest sport in Pakistan after cricket. Pakistan has a huge history of world champions in squash and so it is very popular and played by lots of people. I saw a great deal of enthusiasm in the kids who were playing squash and that made me even more interested in playing it.

Did somebody teach you how to play or did you learn by watching others play?

Most of my squash, I learned all by myself by simply watching the boys playing and then trying to create my own drills and shots and playing solo all the time. Later on, I attended the national camps for squash and was able to learn more.

What is it like to train with the great Jonathon Power? Can you walk us through your daily training regimen?

I have improved a lot since moving here to Canada and have already won two international tournaments in the U.S. I am getting physically fitter and have been working on improving my tactical game of squash. I have also been trying to adopt Jonathon's style of playing (trick shots, etc).

On a daily basis, I spend a great deal of time doing both on-court and off-court training. I train in a group with the Canadian national team (high performance squad). In addition, I have been getting treatment for my injuries from the best doctors and trainers. I do a fair bit of stretching and yoga as part of my treatment.

I don't have one particular favorite player. I admire different squash players for different reasons. For example, Nicol David is a good mover on-court and overall, is just a great person, so I admire her. Ramy Ashour is a great shot-maker. There are so many other squash players whom I admire for their different skill sets.

My favorite shots are straight kills and volleys.

Squash is a medium for me to make a positive change in the world. I want to transform and purify open the souls of people through education, skills and sports and bring all the positive energy together as one to restore peace, respect, love, brotherhood and inter-faith harmony.

I used to be very short-tempered and would always engage in brutal physical fights. Once I began playing sports, my energy was channeled in a positive way. Rather than hitting people, I started hitting squash balls! Because of my own experience, I believe that I can help create a positive change within the world through providing opportunities and access to sports, skill development and education.

On a strictly personal level, my goal is to stay injury-free and to become more physically fit, stronger and faster. I am currently training for the major squash tournaments which occur at the end of this year, including the World Championship, as well as for the tournaments at the start of 2014.