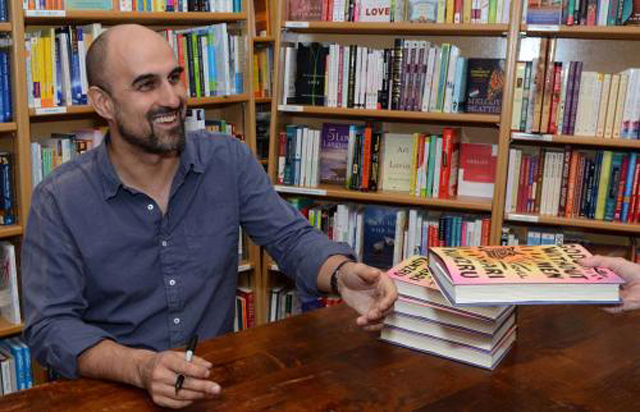 Hari Kunzru at a book signing of his novel "Gods Without Men" at McNally Jackson bookstore in New York City in March 2012. (McNally Jackson)

On Twitter he describes himself as a "Novelist, skilled user of social media as work avoidance tool." But after following his online musings, we discovered that Hari Kunzru uses his account for more than mere procrastination.

"#India & #Pakistan could solve Kashmir issue through annual test series. Like the Ashes, winner holds valley until beaten, #NoWar," he recently tweeted of the January 6 clash between Indian and Pakistani troops near the border of the disputed territory.

Kunzru's outspokenness extends well beyond social media, too. In January 2012, when author Salman Rushdie canceled his plans to attend the Jaipur Literature Festival after receiving death threats, Kunzru used his own session at the festival to read from Rushdie's novel The Satanic Verses, which is banned in India.

A journalist and prize-winning author, Kunzru's novels include The Transmission, My Revolutions and Gods Without Men, as well as a short story collection, Noise. He's also the Deputy President of English PEN, a patron of the Refugee Council and a member of the editorial board of Mute magazine.

Kunzru appears at Asia Society New York with fellow novelist Manu Joseph this Thursday, January 10 to discuss Joseph's new book, The Illicit Happiness of Other People. We reached out to him via email to get his thoughts on the Delhi rape story, the debate over Mo Yan's Nobel prize and Asian-American writers.

You've been discussing the Delhi rape on Twitter. You recently tweeted, "And before the saffron mob weighs in, India and Pakistan are both world-class in misogyny. I make no distinction." Could you elaborate on this?

After I condemned the stupid comments by the head of the Rashtriya Swayamsevak Sangh to the effect that rape happens in "India" but not in "Bharat" (i.e., only in areas "contaminated" by urbanization) I started to get messages from ultranationalist Hindus calling me "sickular" and asking why I hadn't also condemned equally ridiculous comments by a Hyderabad Member of Paliament called Akbaruddin Owaisi. I hadn't actually seen the guy's comments, but I'm used to being attacked for perceived pro or anti-Muslim or Hindu bias. My tweet was an attempt to shut that down before it got boring. This Owaisi's brother actually brought a court case against me after the Jaipur Satanic Verses reading, so I'm hardly a big supporter of the family's brand of opportunism and self-promotion.

Have you been following the debate between Salman Rushdie and Pankaj Mishra about Chinese Nobel Laureate Mo Yan? If yes, what are your thoughts on the matter?

First, on Mo Yan — I think seeing a simple binary between supporting Liu Xiaobo and being a hopeless party stooge is to misunderstand the many complexities of living as an intellectual in China. Not everyone is capable of withstanding what Liu or Ai Weiwei have suffered. Personally, I have particular admiration and respect for Liu, Ai, and others such as Ma Jian and Gao Xingjian, all of whom have taken a firm stand against the Chinese state apparatus, and have been punished for it. Mo Yan does not have that courage, and his remarks in Stockholm comparing censorship to airport security seem particularly craven. His uncomfortable experience in front of the world's press has, I think, shown that he's a problematic laureate — I say this as someone who hasn't read his fiction, so I'm unable to make a literary judgment.

Salman is not the only major writer to have condemned the choice — it's hard to ignore Herta Muller's fiery denunciation. She, of course, suffered at the hands of the Ceausescu regime in Romania, and has immense authority. Pankaj and Salman have longstanding political differences. I think it's perfectly open to Salman to criticize the Mo Yan award. Pankaj's point is (as I understand it) that on the international stage, writers in China are being held to a higher standard than writers from "the West" when it comes to speaking truth to power. There's something to this. Some Chinese friends have grumbled to me that Mo Yan’s work is only seen through the prism of support for Liu Xiaobo. If support for, say, Bradley Manning was the sole criterion by which American writers were judged, a distorted picture would emerge. We also know from the experience of the Cold War that writers can be held up as exemplars of freedom in the West because their politics accord with those of Western governments. Solzhenitsyn, who was considered a sort of saint in the '80s, now looks (against the backdrop of Putin's ultranationalist Russia) like just another religious authoritarian. That doesn't take away from the power of his portrayal of the Gulag, but it does show how the terrain of such judgments changes.

You are of Kashmiri origin, born in the UK and now living in America. What do you think of the categorization of Asian-American writers? Do you consider Indians writing in English as global writers regardless of their geographic location?

I am, to be exact, of Kashmiri Pandit and English origin. I dislike categorization — it doesn't have much bearing on how writers perceive themselves, and is usually part of some debate about national identity, to which some idea about "national literature" is appended. I consider Indians writing in English as writers, first and foremost. Questions of national belonging are secondary.