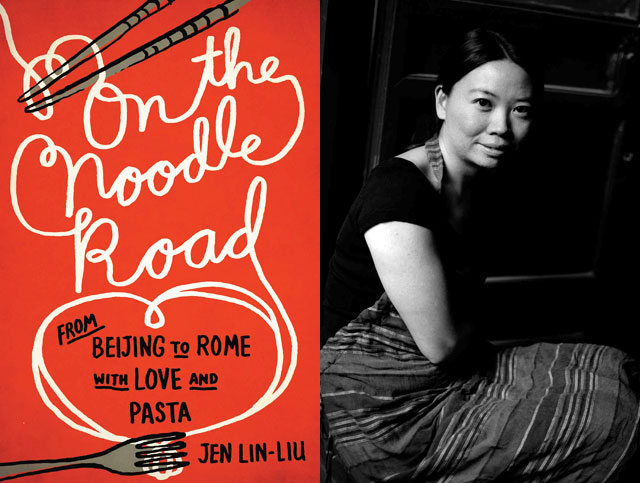 Setting out to discover pasta's past, Jen Lin-Liu, founder of Beijing's Black Sesame Kitchen, travels along the historic, undulating Silk Road trade route linking Asia and Europe in her new book, On the Noodle Road: From Beijing to Rome, with Love and Pasta (Riverhead, 2013). Eating her way through China, Central Asia, Iran, Turkey, Italy, and Greece, she documents the changes in cuisine from East to West. On her journey, she not only discovers culinary delights and recipes but also stories and transnational connections between disparate cultures of the Silk Road.

Lin-Liu is also the author of Serve the People: A Stir-Fried Journey Through China and has written about food and culture for the New York Times, the Wall Street Journal, Saveur, Newsweek, Travel + Leisure, and other publications.

Via email, Asia Blog talked with Lin-Liu about the flavors, origins, and fascination of noodles.

Both the Italians and Chinese lay claim to inventing the noodle. According to your research, where did noodles come from?

The oldest historical mention of noodles I could find appears in a dictionary from the third century A.D. in China. The earliest Chinese noodles, though, don't appear as strands of dough — they were shaped into little bits, formed from bread dough, and thrown into a wok of boiling water. That kind of noodle, called mian pian, is still eaten in China. This was one of the most interesting pieces of research I came across — that noodles in China actually began with its tradition of bread, something that is still widely eaten across northern China.

Another early mention of noodles has been traced to the Jerusalem Talmud, dating back to the fifth century A.D., and was called itrium — and several centuries later, a string-like pasta called itrium made of semolina and dried before cooking is described by Syrian physicians.

Of course, these documented mentions of noodles come later than when noodles first developed — and unlike other inventions, like say, the telephone, it's rather difficult to pinpoint exactly when and where noodles came from given that they relied on the innovation of cooks in their homes. I got to see many of these cooks in action on the Silk Road, one of the great pleasures of writing this book.

I'm fascinated by your travels through Central and West Asia. What connections through food did you discover with Turkic and Persian cultures?

I learned through my travels that the word Turkic is much more encompassing that the nation of Turkey: there are ethnic Turkic groups that span from western China to Turkey itself. Linguistically and culturally, these groups are all linked. In Iran, there is an ethnic Turkic group called the Azeris. These Turkic groups share one really interesting dish — dumplings. In the northwestern region of China and Central Asia, Uighurs and Uzbeks make a dish called manta, steamed dumplings filled with mutton and pumpkin and served with cream. In Turkey, the dish evolves into manti, tiny tortellini-like dumplings that are boiled and served with yogurt, mint-infused oil, paprika, and crushed walnuts. Some researchers have theorized that Genghis Kahn and his empire that spanned from east Asia to central Europe has something to do with the development of dumplings (in the form of pierogi) all along this path — it was an easy food to make and boil while on the road and the filling could be easily varied.

What was it like attending cooking school in Iran?

That was one of the most fascinating experiences of my trip. In Iran, I had to travel with a tour guide who was essentially a government minder. I was able to get away from him when we came across a women's-only cooking school and the women operating the school invited me in to learn how to cook Persian dishes with them. The school was in a private home and women were free to dress how they wanted and were able to talk freely about the constraints that the Islamic government had put on their lives. Aside from learning amazing Persian rice dishes (and a couple of noodle dishes that didn't quite match up), I learned that many Iranian women are very strong and career-oriented, but yet have to deal with many day-to-day nuisances like wearing the hejab and not being able to freely socialize with men, even privately.

Who makes the best and most irresistible noodle cuisine?

It's a toss-up between Italy and China. But that is one of the most alluring things about noodles: how varied they are. In China, you have chefs that pull the thinnest of noodles called la mian and bath them in a long-simmering beef soup with chili, coriander, and crumbles of meat; meanwhile in Italy, you have sfoglie (female pasta makers) rolling out delicate thin sheets of spinach noodles and baking them with bolognese and bechemel sauce. And both are noodles!

Any hope that noodles will become an American staple food in the future?

Pasta has become a staple food for many Americans, but the making of noodles and pasta at home is still fairly rare. I think that as the movement to make things from scratch continues among a set in the United States, noodle-making should catch on. And it's almost as easy as making piecrust or bread — just a couple steps more.

Your question reminds me of something an Italian woman said when I asked her to name her favorite dish — she protested and said, "That's like making me chose my favorite family member!"

So all I can say is that I narrowed my favorite recipes down to a couple dozen in my book — I have dumpling and noodle dishes that span from China to Italy and some accompanying dishes like Turkish rose borek (phyllo dough stuffed with leeks, feta, and honey) and Persian braises like fesenjun (chicken simmered in walnut and pomegranate sauce). To narrow them down any further would be too torturous.