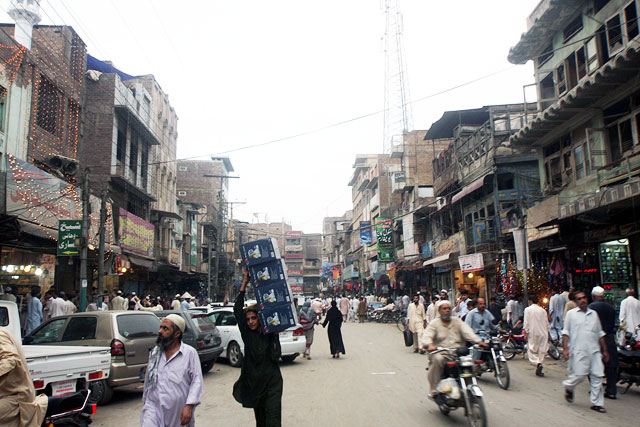 The Qissa Khwani Bazaar in the old city of Peshawar, Pakistan. (Iftikhar Firdaus)

Zalan Khan is a British Pakistani with more than 10 years' experience as a freelance writer and blogger focused on history and politics. Khan spent a part of his life in Peshawar, in the Khyber-Pakhtunkhwa province of Pakistan, a part of the globe that typically comes to the rest of the world's attention as the site of bombings and other political turmoil. Khan recently became so frustrated by what he saw as mainstream media's narrowly-focused coverage of the region that he decided it was time to get local voices heard globally. He founded a blog, Qissa Khwani: The Storyteller's Bazaar, expressly for that purpose in April 2012.

Committed to showcasing a wide range of local perspectives on history, culture, gender, religion, and politics as well as on the conflict plaguing the region, the blog takes its name from the Qissa Khwani Bazaar (Market of Storytellers) in Peshawar. Once a crossroads whose teahouses bustled with professional storytellers and artists from different parts of the world traveling along the Silk Route, the Qissa Khwani Bazaar is still a busy part of Peshawar's old city.

Khan responded to Asia Blog's questions about the Qissa Khwani blog via email.

What does Qissa Khwani mean? And who are the people behind this site?

The blog is named after the storytellers' bazaar in Peshawar's old city. It was inspired by the realization that there was a vacuum in the narrative about the region. To put it simply, people were writing and talking about a region without actually letting the locals write and speak for themselves. The idea was to create an inclusive blog which offered a platform for a generation of writers from the region who would look at their region and the world with their own distinctive perspective.

Historically, Qissa Khwani was an appropriate name for the blog because it has been a transit point for traders on the Silk Route, a point where travelers and traders plying their wares across India to the east and as far as Central Asia and Turkey to the west would meet to exchange stories, rumors and information. We have attracted a variety of writers, ranging from people living as far apart as Kabul to Delhi and the Middle East to Canada. The site is a collaborative effort, with people contributing articles and pictures and others contributing time to improving its profile on social media like Twitter and Facebook.

To give an example of the unlikely collaborations this has led to, we had two writers work on a story titled The King, the picture and the water carrier which gave two perspectives of the ouster of the reformer Afghan King Amanullah Khan in 1928. One perspective by an Afghan writer based in London explained how a fake picture was circulated to be used as propaganda against the King. The other perspective, shared by a Peshawar-based writer, gave insight into the possiblity that the British Raj had supported this ouster because of the King's independent tendencies. When you consider that both authors wrote with insider information on events they had heard from members of their family who were politically active in those days, it gives you an idea of the possibilities.

Another example is this story, For the love of India and in memory of Tirah by Sabah, an Indian Muslim of Pashtun descent living in the Middle East, writing about how her family were holding onto traditions from their ancestral home of Tirah in Pakistan's Federally Administered Tribal Areas.

We also reflect on the ethnic problems of the region — we have Dr. Mohammad Taqi's series on the false histories used to discriminate against the Hazara community of Pakistan and Afghanistan.

Do you have a global audience? Is Qissa Khwani mainly an attempt to bring a better understanding of the region to people in the West, or is it meant for a local audience?

In modern society, I think the answer is, by default, both. The site offers an insight to others into what is going on in everyday life, a reminder that amidst all the violence, displacement, floods and other tragedies, there are people who are getting along with life. They live, love, care and struggle as much as anyone else. For the locals, with a youth bulge in the region it gives an opportunity for the curious to learn about parts of life and history they might have not been taught or not been aware of.

What kind of narratives does Qissa Khwani highlight? And why do you believe it is important to tell them?

Since I was a child I have always been interested in stories: I think proverbs, tales and fairy tales are ultimately parables of real life. When done right they inspire and give us hope, they challenge stereotypes and those sweeping brushes of bias and prejudice. To quote G.K. Chesterton, "Fairy tales are more than true, not because they tell us that dragons exist, but because they tell us that dragons can be beaten."

In terms of the modern narratives, they are all over the newspapers and perpetrated by both the local elites, national media and international media. They promote myths like how the region is the graveyard for empires and not how the empires make the region a graveyard for its people. They explain how important it is to negotiate with the Taliban, implying that all locals are by default Taliban or, worse, how they are regressive "tribal people" who oppose modernity.

What place does traditional storytelling hold in modern Afghanistan and Pakistan?

It is a difficult time for the story teller and those who challenge narratives in both countries. Reading is considered a luxury and not useful in day-to-day living, they face harassment, threats and extortion if they push the boundaries of debate. Well-educated people would rather take as an accepted truth what others have to say about them than analyzing and challenging it, in fact, you would be surprised to know that senior bureaucrats posted in parts of Pakistan are known to use books written a century ago during the British Raj. This is despite hundreds of thousands of people from this region living all over the world. So to say traditional storytelling is not under threat would be an understatement.

What's your vision for the future of Qissa Khwani?

I look at it as a home for established and budding writers — hopefully, a place where a global audience can connect with them and share their humanity, share their stories. A place from which they move on to an even bigger world audience and remind the world that we are very much part of it.

For the people of the region, I hope peace is restored and that the locals reconcile the modern world with a rich culture and mythology. And perhaps one day, they can let everyone know that they have vanquished the dragons that stalk their land — but that is perhaps a story yet to be told.