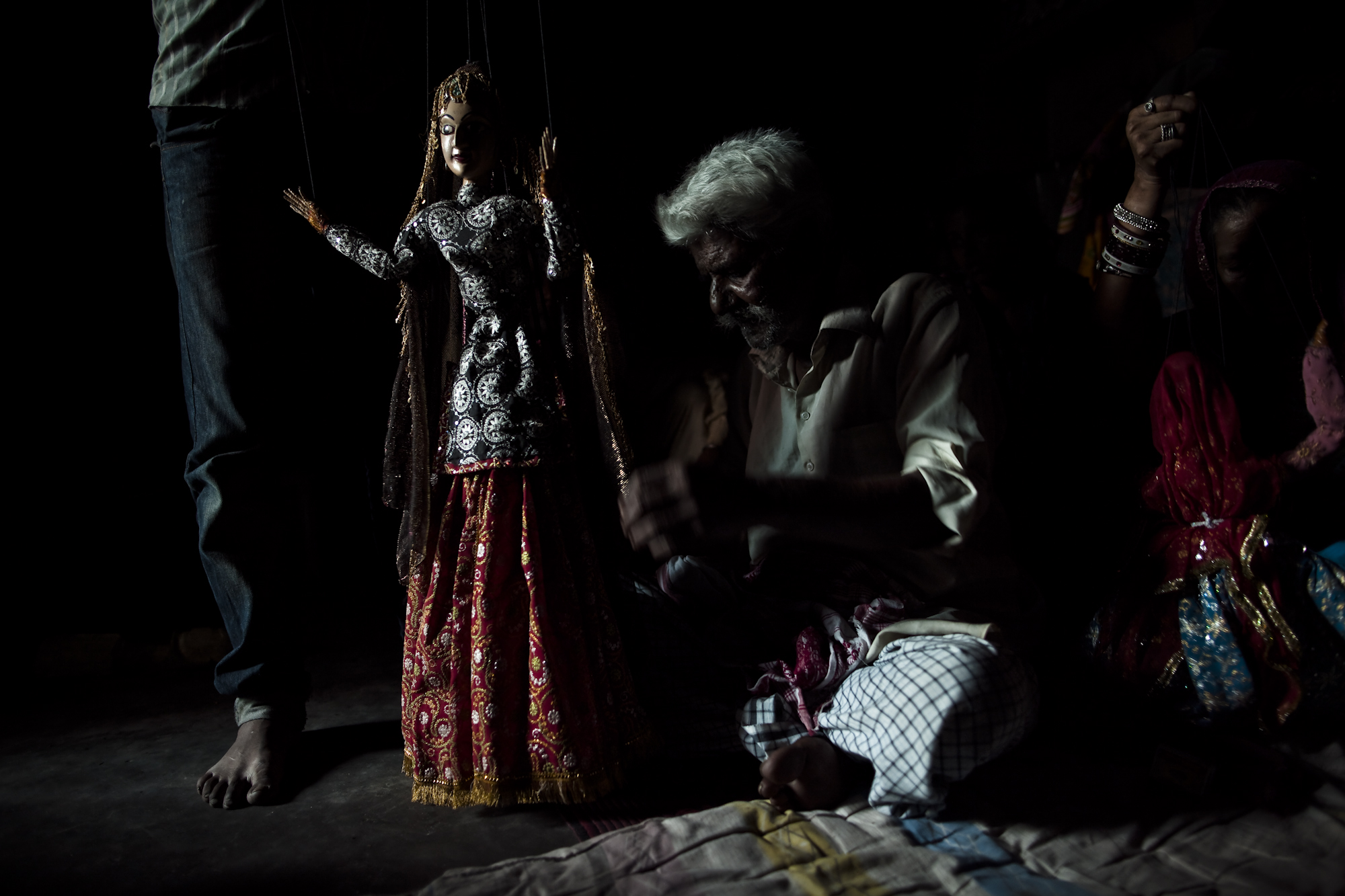 Kathputli, which means "puppet" in Rajasthani, is also the name of an economically depressed colony in New Delhi where a large community of artists, ranging from puppeteers to magicians, decided to settle in the 1970s. In light of the Delhi Development Authority's in situ rehabilitation of the colony, three emerging American filmmakers — Jim Goldblum, Adam Weber and Joshua Cogan — have recently completed shooting their first documentary, Tomorrow We Disappear. The title of their film at once refers to the imminent destruction of Kathputli as well as the ongoing disappearance of heritage arts in South Asia.

For a glimpse of what we can expect from this project, Asia Blog reached out to the filmmakers via email.

What first inspired you to pursue a documentary on the Kathputli colony? Why did you choose a region of the world you had little exposure to prior to shooting the film?

The first time we read about Kathputli was in [Salman Rushdie's novel] Midnight's Children. That led to a Google search. That led us to the work of scholars and prominent South Asians who have worked on Kathputli. Rajeev Sethi, who helped the artists organize a cooperative society in the 1970s to get rights to their land, played a key role in helping us understand the history and politics of Kathputli. Lee Siegel, a Sanskrit scholar who has studied Indian magicians, has observed that, "It's a primary principle of magic that any object becomes invisible when no one's looking at it." We found this to speak volumes not only to elements of magic but also to the state of the Kathputli colony and urban poverty in South Asia.

Admittedly, we owe our introduction to Kathputli to Rushdie, and we recognize our cultural distance from India. But as filmmakers we saw an opportunity to tell a story that is entrenched in a number of critical issues: urban politics, capitalism, Asian arts, and the existence of magic in an increasingly techno-capitalist world. Many movies about slum life garner pity for slum residents; we want to show the dignity of Kathputli artists' lifestyle, exhibit their talent and show above all that they deserve respect.

What were some experiences that stuck with you while shooting this film?

Most impressive to us is the lengthy and complex history that survives in Kathputli. These artists trace their lineage back centuries, and the stories they tell have been passed along for generations. It's amazing to think about the amount of training these artists complete, beginning at an extremely young age. Parents begin stretching children's limbs at age three, and training is incorporated fully into everyday life. As a result, the acrobats in Kathputli can perform feats that many contemporary dancers would find impossible.

To what extent are street magicians engaging with South Asian mythology versus marketing their acts for popular consumption?

All of the artists in Kathputli experience the tension between popular culture and traditional mythology. The street magicians definitely engage with both regularly; while many of the themes in their performances are drawn from myths, they also reference Bollywood in an attempt to stay relevant and draw their audiences.

What do you see as the future of Kathputli's network of artists amidst the plans to relocate the colony's residents?

Our film primarily illustrates what will be lost. When you remove people from their homes and change the way they live, it changes their relationship to their culture and traditions. Obviously, it's imprudent to generalize about the future of the artists as a whole. Some of them will stop performing altogether whereas others will continue.

With in situ rehabilitation, you take a slum population, move them to transit camps, raze their former homes, and construct new flats with better amenities but less space for the residents. The process displaces the residents for three to five years. The "leftover" land goes to commercial development for things like malls and shopping complexes. It sounds nice, but there are many issues with ownership and maintenance. And of course, establishing a consensus in a slum population is notoriously difficult. As soon as word gets out that flats are being constructed, slum populations often grow. Furthermore, the initial census considered for flats incorporates families that exist today, and not the ones that are yet to be created. This creates many contingencies and doubts for a sustainable future.

Do you see Tomorrow We Disappear as a part of a larger trend of disappearing South Asian arts today?

South Asia is one of the last places where traditional arts are being practiced rather than studied. India is also one of the most extreme cases of a rapidly emerging capitalist economy. Filming the artists of Kathputli allows us to directly observe this clash between tradition and capitalism.

Tomorrow We Disappear raised funds via Kickstarter and is currently in post-production. Watch a trailer below: