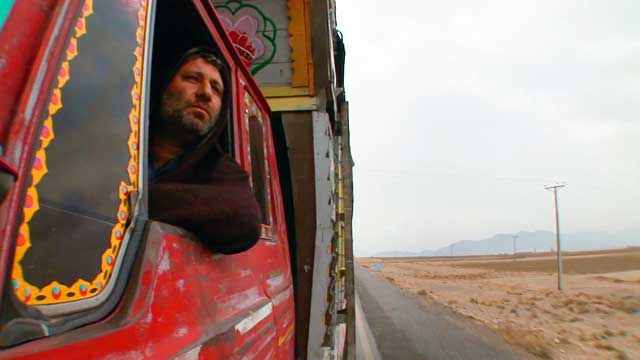 Abdullah, a truck driver who has traveled the length and breadth of Pakistan, is one of six subjects profiled in the documentary "Without Shepherds." (Cary McClelland)

Without Shepherds is a documentary film co-directed by artist and human rights advocate Cary McClelland centered on the lives of six diverse Pakistanis united by their aspirations for a better future. Shot over two years with more than 900 hours of footage, the film is a collaboration between Pakistani and American filmmakers and was co-directed by Pakistani artist Imran Babur. The documentary's arresting visuals are matched by an impressive musical score by Pakistani singer Arooj Aftab.

Asia Society first profiled McClelland in its special report Making a Difference Through the Arts: Strengthening America's Links with Asian Muslim Communities in 2010, when his film was still a work-in-progress. Now touring the festival circuit, Without Shepherds won Best Documentary and the Grand Chameleon Award for Best Film earlier this summer at the Brooklyn Film Festival.

As a New Yorker, McClelland was deeply affected by the events of 9/11. Dissatisfied with the existing coverage of the "war on terror" and eager to explore the human face of the story, McClelland visited Pakistan for the first time in 2007. Moved by the richness of the culture, and keen to tell a multidimensional story of Pakistan and its people, McClelland profiled six Pakistanis from different regions and social classes: Imran Khan, the former cricketer turned politician building a new political movement; Laiba, a Pashtun woman journalist reporting from the northwestern frontier; Abdullah, a truck driver trying to provide for his family; Vaneeza, a model and businesswoman setting a new example for female entrepreneurs; Arieb, a Sufi musician exploring the healing power of music, and Ibrahim, an ex-Taliban solider looking for salvation.

By sharing their hopes, dreams and frustrations, the film aims to connect audiences to the characters on a personal level that transcends boundaries. "We thought that the human portrayal would help an American audience understand the country," explains McClelland. The team received the warmest response in Pakistan but filming wasn't without its challenges — including security concerns and funding constraints.

McClelland is presently studying law at Stanford University. He has worked on human rights advocacy projects in East Timor, Zimbabwe and the Democratic Republic of Congo and recently helped Google and the nonprofit WITNESS launch the Human Rights Channel on YouTube.

Over the phone, McClelland chatted about his passion for telling people's stories, why Pakistan doesn't need shepherds, and further upcoming projects.

What inspired you to make a documentary about Pakistan?

What initially took me to Pakistan was a film on the tribal areas. Billy Smith, a producer of Without Shepherds, and I were asked to do a film looking at the Pakistani Frontier Corps [Pashtun tribal paramilitary force of the Pakistani army]. I had always wanted to do something that spoke to a different story of the "war on terror." However, we realized the tribal story was going to reinforce stereotypes because we were not getting the access needed. We grew disheartened but, luckily, that gave us time to immerse ourselves in Pakistan and learn about the culture.

We were reading a lot about American panic and what to be afraid of but not much in terms of how the communities we were in conflict with were framing the issue themselves. I wanted to dig in a place where we could spend a significant period of time telling people's stories. Iraq and Afghanistan were out of the question because the story would be too much about the U.S. occupation and that's not the story we wanted to tell in Pakistan.

Pakistan seemed like an interesting place to explore. It was an ally but was sovereign. We were struck by how politically sophisticated it was. There wasn't anybody we talked to who couldn't have an incredibly complicated conversation about American politics, the UN, Muslim identity issues, etc. I had seen political understanding in places that I had worked at but this was a global understanding that felt very unique to Pakistan.

There is a three-fold answer to that. The first part is the collaboration between Pakistani and American filmmakers. We had a lot of support from production crews both in Lahore and Karachi who helped us outreach within the country. Whenever we showed up it didn't feel like an international crew arriving.

The second part is that the people we covered in the film are genuinely open, brave and outspoken people. When we were looking for people we knew they would nominate themselves if we were open and sincere. Imran Khan was the first person we contacted about the film and he said yes within 20 minutes! Other people nominated themselves in their own ways. These were individuals who in their daily lives gave access to their true feelings to all kinds of people.

The third part is that we tried to approach everyone openly and honestly about the film. We were very clear that we weren't going to be telling an explicitly positive story about the country but a human story. The openness with which we approached subjects I think helped them respond similarly.

Without Shepherds was featured in Asia Society's 2010 report Making a Difference Through the Arts: Strengthening America's Links with Asian Muslim Communities. In your opinion, how can documentary films challenge cultural stereotypes?

Independent documentary film has a unique role to play in how we view our world. There's an overabundance of video, particularly from places in political crisis that’s incredibly valuable for documenting human rights abuses. But it doesn't give us much insight, it's hard to verify and there's a lot of reinforcement of fear that can come from that. With all the media around it's hard to tell stories longer than a byline. These stories can take months, maybe even years, to explain.

The independent documentarian can do a lot with a little and record an incredible volume of footage as we did. We had 900 hours by the time we finished! Hopefully the lesson of the film, can be taken anywhere in the world which is as outsiders to humbly look inside other countries that we are curious about. We owe a tremendous amount to the independent documentary for saving how we see the world and shaping untold stories. We're never going to get a very rich understanding of the world by only watching the news or YouTube.

The film's title was inspired by Ibrahim's comment: "Sometimes you will see animals here without a shepherd. We let them roam free. And no matter how far the cows wander, they come home by dusk." How is this observation parallel to the lives of the six subjects?

Our intended interpretation of that line is we don't need shepherds or we don't need the shepherds we thought we needed. The line carries this message that in the end, we naturally possess the instincts to hone in to the right destination and goals. Even though we may wander astray, we know how to return through our own diffused processes.

And that is what the final montage in the film is about. Arieb is at the shrine dancing, the fashion show gets pulled off, Imran's political efforts gain momentum, Laiba stays in her village and finds joy, Ibrahim goes through his own cleansing, Abdul arrives home and everybody in their own way is coming together in a moment of arrival. The idea is that change is not singular but plural. All those levels of change are necessary for Pakistan to move forward and none alone are sufficient.

What other projects are you currently working on? What's next?

There are a couple of projects that I'm pushing forward in my free time. One is telling the story about the Syrian conflict through citizen journalism. The project would look at the huge amount of footage that came out of the conflict and tell a varied story so that it's not just shots of bombings but so we can really get inside what's been happening there.

The other is that I'll be teaching documentary film at San Quentin. I hope to help the students and prisoners there create their own films and make sure that they're seen.

Both these projects are advancing what Without Shepherds did, which is to tell stories in collage with multiple collaborators and help other peoples voices be heard.