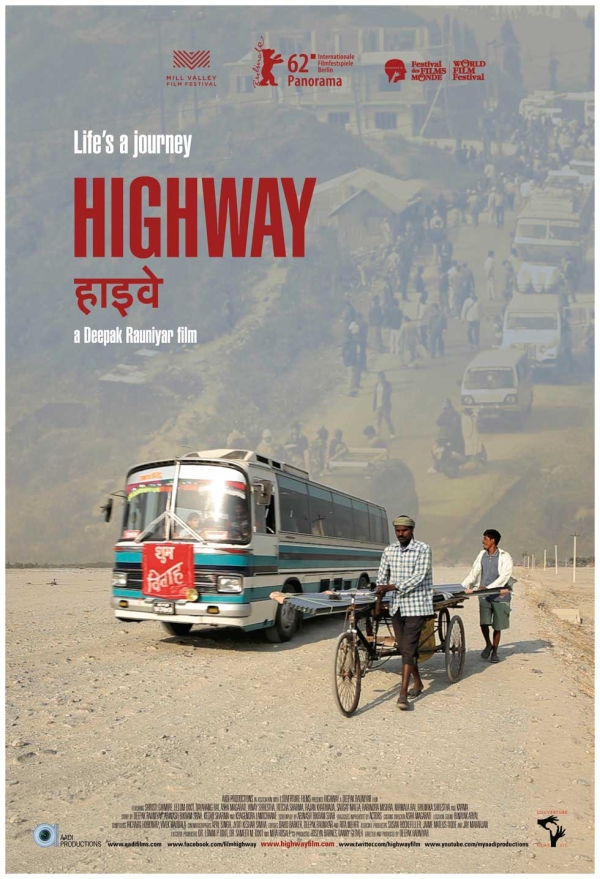 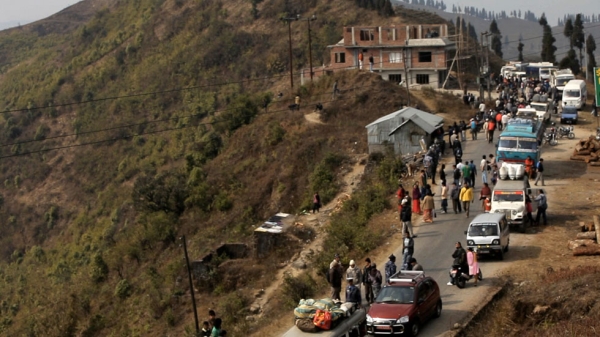 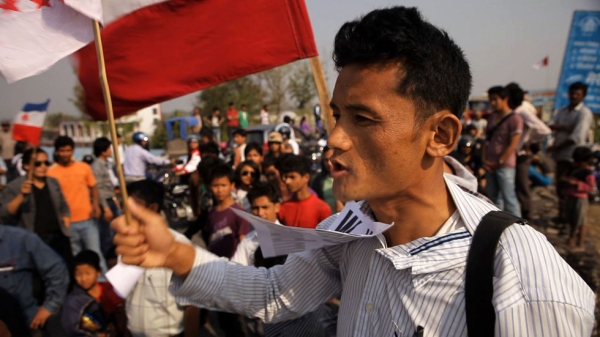 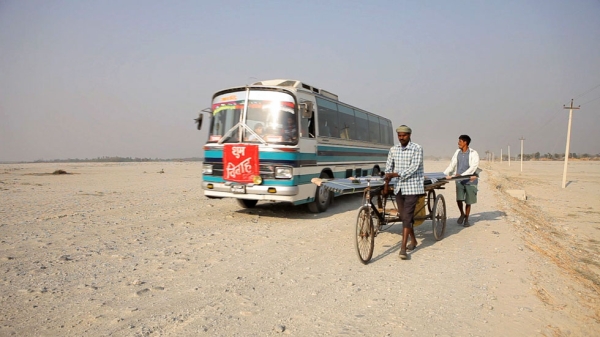 Highway (2012), the feature debut of Nepali filmmaker Deepak Rauniyar, marks the rise of a fresh new cinematic vision for the Himalayan nation. Decidedly different from the standard commercial product heavily influenced by Bollywood, the film takes an understated look at an increasingly common phenomenon: the bandhs, roadblocks caused by strikes or protests that often paralyze traffic and disrupt daily life.

The unusual road drama centers around an ill-fated journey on a highway from eastern Nepal to Kathmandu, the nation's capital. A bus filled with passengers of various social and economic backgrounds gets repeatedly stuck in bandhs. Each passenger is desperate to get to Kathmandu for a different reason — a man needs to reach his wife quickly to try to conceive a baby or else the herbal fertility medicine he has taken will lose effectiveness, a young woman leaves her lover and is on her way to an arranged marriage, and a man hurries back home to see his boyfriend who is devastated by an attack on a transgender friend. They quickly put their heads together and transform the bus into a wedding vehicle — with a bride, a groom, and a wedding band in tow — to gain passage.

Crisscrossing this seemingly humorous adventure are fragments of each individual's backstory, ironically filled with despair, hardship, and deceit. The non-linear narrative structure, which includes the main plot and disconnected subplots, offers a kaleidoscopic look at contemporary Nepali life, which has only recently emerged from 12 years of civil war. The film gives a realistic portrayal of the new Nepal and is the first film from the country to be included in the Berlin International Film Festival (2012).

The film will screen as part of The Museum of Modern Art’s ContemporAsian series from April 25 to May 1, 2013.

Director Rauniyar responded to questions about his film via email.

What inspired you to make this film? 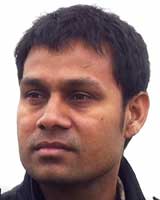 Recently, in postwar Nepal, we've seen a new trend emerge in the country — if a group, an organization or a party is "unhappy" and wants to demand something from the government, the first thing they try to do is to shut down the major highways which connect the capital or a road or a city or the whole country! This is known as a bandh. It has become a part of our daily life now. When you start a journey, it is always uncertain, and the bandhs can last for a few hours or for days or even months.

I have experienced several bandhs. One of these was 57 hours long with no food or water. I even witnessed two people being killed — when vehicles were allowed to leave around midnight of the third day, they drove over the people sleeping on the road in a rush to escape. Since that traumatic experience, I have wanted to express my feelings through a full-length film.

In 2009, I happened to be on a road trip from east Nepal to the capital, Kathmandu. Our journey was obstructed by three different bandhs, organized by three different groups in three different parts of the country. This was when my colleagues Kedar Sharma, Khagendra Lamichhane [who worked on the story] and I started talking about the idea for this film, Highway.

Is the bandh a metaphor for Nepali society/life, which seems to endure many other forms of roadblock, as suggested by individual passengers' stories?

Yes, but don't you think it's also a metaphor for society/life in other parts of world today? Sometimes, I don't see much difference traveling on a bus in Nepal or commuting by subway in New York. Until or unless we have a problem or are in need of help, we don't even look at the person sitting next to us! Neither physical nor mental bandhs are limited to Nepal. I felt that by setting a story against the backdrop of this new bandh culture, I would not only be able to explore physical bandhs, but also explore the mental/psychological bandhs that many of us seem to be facing these days.

How did you create all these very interesting characters who represent a very diverse spectrum of Nepali society?

As you know, Highway's story begins with a bus journey in a small town of eastern Nepal headed for the capital Kathmandu. When I thought of a bus, I thought of the country. The country means people from diverse strata of the society. And a bus is one of the few places where you get a cross-section of society. So I thought, it would be a great "vehicle" for the film. I very much wanted to represent people of different backgrounds as a way of helping Nepalis and others around the world recognize what we have in common with each other, as a path for healing this very wounded society. Most of the characters of Highway were inspired by our real-life experiences: either from my life or screenwriter Abinash Bikram Shah's life or something we commonly experienced or took note of.

There is something very naturalistic about the actors' performances. How did you cast them, and how did they contribute to the sense of realism?

Contrary to standard methods of filmmaking, I didn't give actors written dialogue. They improvised their lines on the set while doing a scene. I didn't dictate how they should express their emotions. I didn't even like the camera dictating their movements. I would outline to the actors the situation of a scene, its background and where the scene was taking place, what could be important in the scene and why, and I let them improvise the rest. Mostly they decided how they were going to speak, what they were going to say, how they were going to move, how they were going to express emotions, etc. I believe improvisation allows an actor of any background (child/old/illiterate/professional) to perform to their best ability and it also gives a more natural flow to a scene. An actor or non-actor can add a lot of detail which the writers might never have thought of.

Not all actors like improvising, and some can't really improvise well. I have always worked with my wife, Asha Magarati [who also plays a role in the film], on selecting cast. Asha has been acting and producing theater for almost 20 years now. In Highway she assembled a mixed group of actors, some of whom were well-known in theater and film in Nepal, some of whom were acting for the first time. I felt it was a good decision.

How did you come up with the non-linear, multi-plotline narrative structure?

It came from need! We were dealing with lot of characters, and their individual stories, during one bus journey. It is a current story, even newsworthy! So, we felt, why don't we try to tell it in an inverted pyramid news style, all non-linear! The major incident in the story comes first and then we go back in time and to places, characters and other elements of the story that led up to it.

In addition to this structure, the open ending, which leaves none of the individual passengers' stories resolved, seems to have been unsettling for audiences in Nepal. Can you tell us more about the audience reactions at home and how you feel about them?

We grew up watching Bollywood films with happy or tragic endings, so some people were really upset when Highway ended in such a way. One viewer wrote a comment on Facebook: "I think, writer felt lazy writing when he came by the end of film, so he left film incomplete." Some other people were unhappy about the length of the film — they thought it was too short [75 min.], which is true compared to what they watch regularly. Some even said they felt it was a documentary.

But the best part is that we were all talking about a Nepali film, which we had never done before. Whether you go to a college or a teashop, you read Tweets or Facebook posts, everyone was talking about Highway. In the first two days of the release, 9,400 Tweets had already used the hashtag #Highwayfilm!

The challenging part was, we didn't know how to handle "new media" very well when some people used it in an organized way against our film. And this was a distraction — instead of talking about the issues which the film raised or provoked, the social media side of things started to get stuck in superficialities. It's a good lesson for the future, and also a reflection of a distracted culture, everywhere.

How do you think a more adventurous Nepali film audience can be cultivated? And what do you plan to do next?

It's difficult to say. I strongly believe there is a big audience that wants a "conscious cinema," and in recent years the industry has started to pay a little attention to that demand, and yet there is a lot to be done. Neither governmental nor institutional support is available for such work inside the country. The majority of society and mass media is focused on profits, returns, not content. So, the majority is competing to lie: "look how much we earned!" There are not a lot of people like my Executive Producers, Drs. Sameer and Lonim Dixit and Mita Hosali, who want to invest money in the story, in the characters, who are willing to take the risk, even of failing, in order to advance the range of cultural consciousness in Nepal, or to bring Nepali narratives and characters to the rest of the world — which is very important. On top of that, we are heavily dominated by Bollywood and Indian TV series, and any changes in their trends affect us, too.

But I am still hopeful. Newly-built multiplex cinemas have drawn new audiences. And in the last few years, more than a dozen young directors have joined the industry who are making a "conscious cinema." We have three international film festivals in Kathmandu, and a lot of other movements and film festivals spreading throughout the country, which has helped cultivate an audience. In 2012, four Nepali films traveled internationally. So, if we get a little support, and we can work together, we can overcome this situation. But it is definitely going to take time. It will not happen overnight, for sure.

I am working on my second feature now, which we hope to shoot next spring. It's a little early to talk about it. But I am excited and I hope others will be, too.