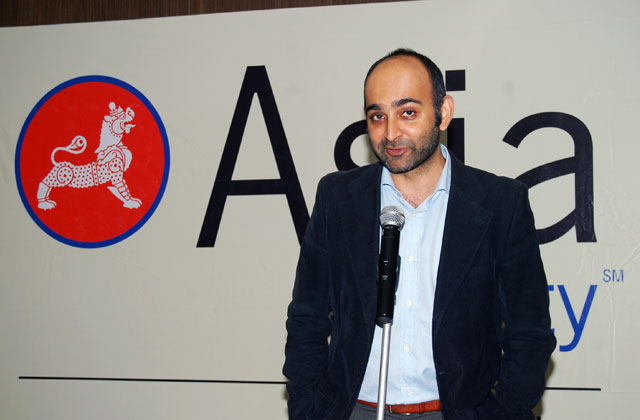 This Monday, February 23, Asia Society New York is pleased to welcome back to its stage novelist Mohsin Hamid, acclaimed author of Moth Smoke and The Reluctant Fundamentalist, for the U.S. launch of his first work of nonfiction, Discontent and Its Civilizations: Dispatches from Lahore, New York, and London.

A wide-ranging collection of nearly 15 years’ worth of the author’s essays, articles, and reviews, the new book shows Hamid to be as adroit at critiquing drone warfare in his native Pakistan and contemporary Islamophobia as he is at parsing cultural phenomena like the myth of the Great American Novel and the rise of serial TV. (One piece, “Art and the Other Pakistans,” originally appeared in the catalogue accompanying Asia Society Museum’s 2009 exhibition Hanging Fire: Contemporary Art From Pakistan.) Ranging from his early childhood in California’s Silicon Valley area through stints in New York and London and his eventual resettlement, with wife and family, in Lahore, the new book also doubles as the informal autobiography of a peripatetic literary intellectual at the beginning of the 21st century.

Joining Hamid onstage at Asia Society will be Dr. Azra Raza, Professor of Medicine and Director of the MDS Center at Columbia University, who is also a specialist in classical and contemporary South Asian literature and co-author of Ghalib: Epistemologies of Elegance, a 2009 study of the Urdu poet. (For those who can't attend the author talk in person, it will also be a free live webcast at AsiaSociety.org/Live at 6:30 pm New York time on February 23.)

Via email, Asia Blog reached Hamid for a quick Q & A prior to the start of his current U.S. book tour.

The introduction to your new collection raises the tantalizing notion that hybridity, far from being an anomaly, is on its way to becoming an almost-universal condition in the 21st century. As a novelist, do you think contemporary fiction is doing an adequate job of capturing this new reality?

Yes. The world of letters is full of hybrids. And this isn't something new. Conrad was a hybrid. Rumi was a hybrid. Art is created by hybridity. 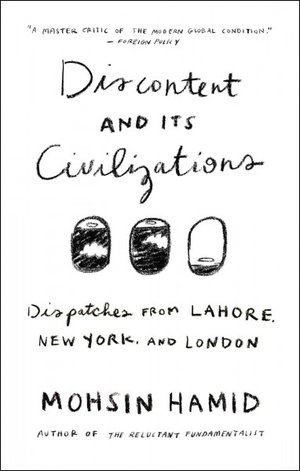 "Civilizations" in your title is obviously a spin on Freud, but we're curious about the implications here. Do you mean something other than cultures, i.e., actual civilizations? What's the difference?

The term culture feels a little more open to me, but only because we recognize the complicating existence of subcultures so readily.

In your introduction to the new book you mention advocating for a "blurring of boundaries," and then go on to say there's a kind of "co-creation" that amounts to a pact between writer and reader. For you, is that the case in fiction and nonfiction? How does the concept you describe as co-creation play out in your politics?

Co-creation occurs in storytelling, which can be non-fiction too. In politics, I think we jointly author the societies we live in. So political writing, for me, is about creating an environment more conducive to the joint creation of futures that are better than the present.

Two lines from the new book have tragic resonances in early 2015. In a 2009 essay you wrote: "Friends of mine in Lahore tell me their children have not gone to school in three weeks because of fears of a Beslan-style atrocity." Then, in a piece from 2010: "The battle against despair is a constant one." Has the massacre at the Army Public School in Peshawar led you to rethink any of your assumptions about your country's future?

In a word, yes. Every time I'm shocked by something, I have to reassess what I think. I wouldn't say that I've lost hope because of the attacks. But I've been shaken, certainly.

The new collection charts the rise of a free press in Pakistan, but we've also just seen a wave of anti-Charlie Hebdo protests there. You also refer to "growing American self-censorship" and write that when a U.S. newspaper published an essay of yours, it "deleted a paragraph on reasons for the anger felt toward America in many Muslim-majority countries. A similar piece I wrote for a British newspaper was published unedited and in its entirety." Do both societies have limits, acknowledged or not, regarding freedom of speech?

When you moved to Lahore, you wrote about missing your fellow writer friends from London and New York. You live in Lahore, Pakistan's cultural hub, known for its associations with preeminent writers like Faiz Ahmed Faiz and Manto. You have spoken of how Manto has inspired you in the past. Are there any contemporaries whom you look to for such inspiration now?

Pakistani writers, you mean? Certainly. It's hard to single out one or two: I'm friendly with many. But there are writers in Pakistan who are far braver than I am, and equally there are those who are even more committed to the craft of writing.