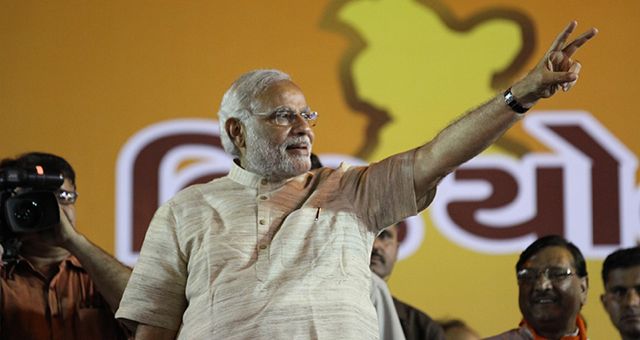 To say the least, India's new Prime Minister Narendra Modi is a polarizing figure: depending on who you talk to, he's either a messiah for the rising nation, or a callous autocrat. Nevertheless, there’s no doubt that Modi is faced with a daunting task as Prime Minister: he must fulfill the many campaign promises afforded by the Bharatiya Janata Party (BJP), and come to terms with an Indian population so large as to often prove ungovernable.

Asia Society Northern California and World Affairs Council host a panel discussion tonight in San Francisco to explore the many implications of Narendra Modi's election and to hypothesize about what the future of India might look like under his nascent administration. In anticipation of the event, Asia Blog spoke to Thomas Blom Hansen, Stanford University's Reliance-Dhirubhai Ambani Professor of Anthropology and South Asian Studies, via phone. One of three panelists featured at the event, Hansen has extensively studied religious tension in India, and is the author of several books, most notably The Saffron Wave: Democracy and Hindu Nationalism in Modern India. Following is an edited and condensed version of his remarks.

Much of Narendra Modi's campaign rhetoric largely focused on the need to revive India’s economic growth and improve its governance. What do you think the recently announced budget says about his priorities for instituting a pro-growth agenda?

I have to admit, I haven't studied the budget in great detail yet. At least what comes out is some intentions to cut subsidies: fuel subsidies, rail subsidies — to reduce the subsidy of rail tickets — which of course has been a major issue because that's the major means of transport for poor people in India. He's doing some of the stuff that many economists and many people in the private sector have wanted the government to do for a long time. His idea of what constitutes a growth agenda in India is based on a kind of neoliberal idea of economic development, which is to cut public expenditures — at least to some extent — and to make the country as a whole a more business-friendly environment.

Given that the previous administration attached itself quite firmly to a kind of pro-welfare, pro-poor agenda in terms of creating programs of cash transfers of different kinds, I think what Modi is signaling is simply a willingness to stop that, and to bring the economic policies of India in line with that which is pursued by many other countries in the world. In that sense, he is doing what a large number of people already had expected, and had wanted the government to do — regardless of whether it was Congress or the BJP.

In this year's election, the BJP, led by Narendra Modi, recorded a decisive win, while the Indian left lost by wider margins than many analysts anticipated. How might this shift in political power play out in the next several years?

It's clear that the Indian left has been decimated, and there's a lot to be said about why that happened. To a large extent it has to do with a lack of new ideas and a certain kind of sclerosis, both in thinking and institutional leverage of the left. The BJP came into power with 31% of the vote, which is still very low when you consider the size of the victory in terms of seats. There's still a good number of people who did not vote for the BJP; a majority did not vote for them. But what Modi and the BJP have is a very powerful slice of the Indian electorate, a very large portion of the middle-class vote, and they have the vote of many upwardly mobile and ambitious people across the country. We see a fundamental realignment of forces: the BJP will have to meet the expectations of all these people, especially those from lower castes.

What they are promising is to turn away from a kind of welfare model where poor people could expect different kinds of cash transfers handed out from the government to a new model of self-generated wealth and prosperity. They might have a shot at this because there is a big opinion in favor of this model, and I think this has to do with the fact that the Congress Party was not able to develop a more flexible idea of what a welfare state could look like. This shifting of sentiments towards a more market-driven idea of what development might look like is in many ways also inflicted upon India by a Congress Party and a left that ran out of ideas.

You've studied Hindu nationalism in India during the 1990s. What are your impressions of how the Hindu nationalist agenda might influence Modi's governing style? How do you expect he will approach relations with India’s minorities?

Many people are worried about this, rightly so. Modi himself is very vested in achieving a standing in the world and making sure he becomes a respected statesman. He's quite vested in making good the many promises he made to the private sector and the ruling class. Those kind of pro-business and pro-development forces he has aligned himself with and who have, in many ways, paid for his campaign and carried him to power, they are obviously not interested in civil disturbances and riots. They are interested in business-as-usual, or rather new a kind of business that is not about street protests, or curfews, or unrest. There are many reasons why Modi would want to make sure that it does not get out of hand, that we don’t see the type of riots and attacks that have been associated with the rise of the BJP and the Hindu nationalist movement.

But what we will see, I think, is that he is disinclined to engage the minorities as minorities; this was made very important in his campaign. He wants to approach India’s development as one of national unity. He claims to be caste-blind and community-blind. There's a considerable constituency for that kind of opinion, especially among those that are more privileged, for whom the predicament of being a minority or being discriminated against because you are of a lower caste is not a familiar experience.

We'll see new rhetoric that is not about looking after minorities, but rhetoric that is culture blind and history blind that will not take into consideration caste or community to the same extent as before. There are some dangers in that, because scholars and policymakers acknowledge that these inequalities and these deep segmentations of Indian society will not go away unless you address them head-on and explicitly, in the form of affirmative action or other such schemes. Personally, I am a bit worried about this rhetoric, about not thinking about history and not thinking about cultural heritage in terms of discrimination and so on, that will end being to the detriment of the people who are historically discriminated against in India. I don’t think it will happen in the form of violent attacks against Muslims or other minorities.

But having said that, I still think there are elements in the wider Hindu nationalist movement that Modi will not be able to control. He might be able to control them now, but how does that look two or three years down the line? I don't know. We are seeing an enormous groundswell of vindication among these people, who have been marginal in India's politics for many years. They may be unable to join the line of moderation that Modi and his advisers have joined. These are the people that brought the BJP to power — we shouldn't forget that — and some of them feel that their time has come.

At the end of Modi's first term in 2019, how do you imagine India will have changed, for better or for worse?

India will have changed a lot less than you will think; India doesn't change very quickly, that's the nature of it. There are no quick fixes. I think we'll see a country that will fundamentally pursue a strategy by which there will be ample opportunity for those that have resources and access to resources. I think we will see a more unequal India, possibly an India with faster growth rates. But, you see, it's not just about curtailing government expenditures — it’s about resolving some fundamental structural problems in the country: the quality of the labor force, the quality of education in the country. I was very dismayed and surprised to see that in the budget there are no substantial increases in the allocation for higher education in the country. I find that puzzling.

My prediction is that it’ll be a more unequal India, where the 30% that were doing well are doing better, but the 70% that aren’t doing well now won’t be doing much better. I frankly think that’s the model they are going for. I think we’ll turn to a high-growth, high-inequality model — a slightly less caring society, you might say. But it reflects what a large portion of the successful in India want to see. When a society is becoming more unequal, and harder on its poorer citizens, and when a society does not want to talk about historical disadvantages or inequalities in terms of caste and community, then it’s clear that those that are already vulnerable — many of whom are minorities — will also be at the receiving end. I think that’s my biggest fear, that there might not be open violence against Muslims and other minorities, but that there will be a structural violence against them, of a slow gradual kind that has already been going on for a long time. Not just because Mr. Modi wants it, but because many of those who brought him to power would like to see that.