What drives a young London librarian to board a ship to India, meditate in a remote cave by herself for twelve years and then build a flourishing nunnery in the Himalayas? How does a surfer girl from Malibu become the head of the main international organization for Buddhist women? Why does the daughter of a famed music executive in Santa Monica dream so vividly of peacocks one night that she chases these images all the way to Nepal where she finds the love of her life in an unconventional young Tibetan master?
— Dakini Power, Michaela Haas (Snow Lion/Shambhala, 2013)

After studying Buddhism for nearly 20 years, international reporter and lecturer Michaela Haas, PhD, embarked on a mission to investigate these very questions. Her new book, Dakini Power: Twelve Extraordinary Women Shaping the Transmission of Tibetan Buddhism in the West, recounts the lives of 12 exceptional female practitioners who have pioneered the expansion of Buddhism in the West. Among the stories included are those of Khandro Rinpoche, one of the few fully trained female Rinpoches in the Tibetan tradition, and Dagmola Sakya, the first woman to both emigrate from Tibet to America and to teach Tibetan Buddhism in the West.

With a PhD in Asian Studies, she is currently a visiting scholar in Religious Studies at the University of California Santa Barbara. Since the age of 16, she has worked as a writer and interviewer for major publications in Germany and the United States, including the Washington Post and Huffington Post.

We reached out to Haas through email to find out more about her perspectives and research process.

You've talked about how you first discovered Buddhism while seeking deeper fulfillment, despite your success in journalism and broadcast TV. Tell me more about the process of personal growth you underwent during your transition to full-time Buddhism.

I became deeply interested in the unique Buddhist science of the mind. Despite a promising career as a reporter and TV host and seemingly having everything, there was a steady undercurrent of unhappiness. The Buddha's teachings contain a stunning promise: that we are what we think — that happiness and suffering is what we create in our mind, and that there really is no limit to the depth of mind's potential. The Buddhist teachers I met intrigued me more than all the celebrities and politicians I had interviewed. Some of the teachers had lost everything, and yet they displayed a compassion and wisdom that impressed me deeply. Buddhism provided answers for questions I had been entertaining for many years, such as: What is the purpose of life? I believe our purpose is to help others. 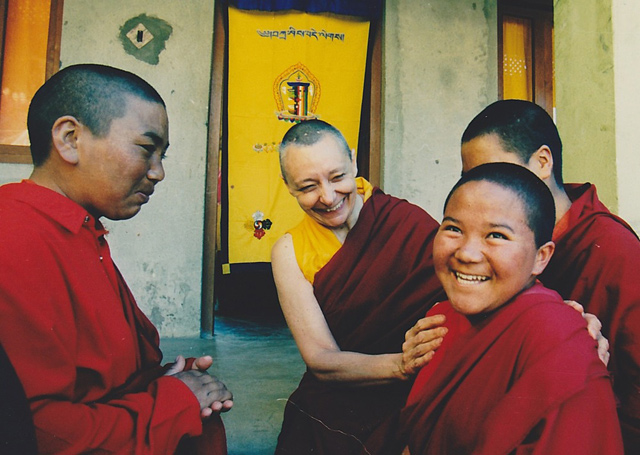 Originally a librarian in London, Jetsunma Tenzin Palmo made the transition into Buddhism by spending 12 years in solitary retreat in a cave in Ladakh. Here she is with her nuns at Dongyu Gatsal Ling nunnery. (Dongyu Gatsal Ling Nunnery)

Some sources say that the role of women in Buddhism has been a historical constant, and female sanghas have been around for centuries. Can you describe the difference between women's roles in different practices of Buddhism, namely Eastern and Western, and why some might argue that the growing popularity of women in Buddhism shouldn't be overstated?

Asia was always a nursery for highly accomplished female practitioners and to some extent still is. The yoginis might live in remote hermitages or nunneries as devoted practitioners, or as the wives, mothers, or daughters of famous teachers. Students often sought their advice informally, but women rarely wrote books, sat on thrones or had big titles. They were there, but often we simply don't know about them. To this day, nunneries are often in remote places, hard to access, with little support, no libraries nor good teachers. If gender plays no role, then why are Buddhist nuns still continuously ranked among the group with the worst health and education? In the West, many Dharma centers are run by women. And of course women wish to participate equally and fully in the Dharma. Western women are not used to being told they have to sit in the back, behind the boys, and through my research I have come to believe that many of these rules that discriminate against women were not actually taught by the Buddha.

Ultimately, the real spiritual path leads beyond any divisions of culture, gender, or geography, but in the meantime, both Asians and Westerners have their own sets of prejudices and deeply ingrained beliefs about hierarchy and fairness. Khandro Rinpoche, one of the very few female Tibetan masters, advised to create an authentic platform for female practitioners and teachers. Together with the Yogini Project we are working on creating discussion forums for and about women in Buddhism. Dakini Power is not just a book about 12 women, but it is meant to be the beginning of a network where I hope more eminent Buddhist women (and men, too!) will participate. 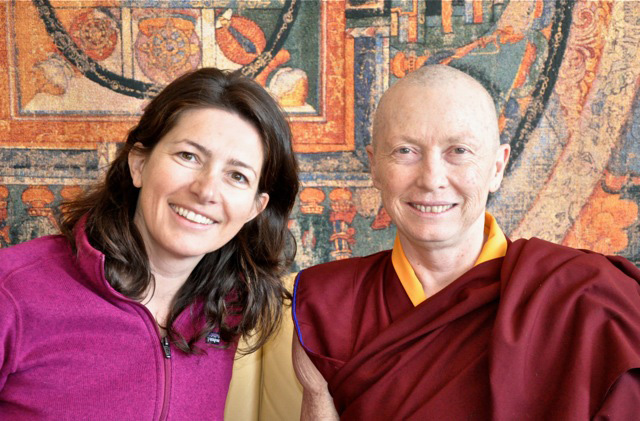 Venerable Karma Lekshe Tsomo teaches buddhist philosophy at the University of San Diego and is committed to the education of Buddhist women. Here she is with the author, Michaela Haas (Gayle M. Landes)

Given the traditional value of the dakini, which you write is "a strong and fiercely independent role model of female enlightenment," could you elaborate on why it is only now that female Buddhist nuns have been allowed to earn a degree in Geshe? And how do you see the Dalai Lama's steadfast support of this cause contributing to how it unfolds in years to come?

While the current Dalai Lama has stated his support for women, especially nuns, for many years and has even called himself a feminist, he has also stressed that he cannot dictate change. The monks and abbots of the major Tibetan Buddhist traditions had to come together and agree to allow women to take the Geshe-exams, the equivalent of a PhD. While iconic archetypes of feminine enlightenment were erected on shrines, few women in Tibet were actually emboldened to follow in their footsteps. Despite the encouraging quote of the pioneer of Tibetan Buddhism that women's potential to attain liberation is supreme, most Buddhist cultures throughout the centuries perceived women as lesser beings.

Commonly used Tibetan words for woman literally mean "inferior being" or "lesser birth." Some orthodox masters doubt to this day if women can attain realization at all, and age-old liturgies have women pray for a better rebirth in a male body. As Dagmola Kusho Sakya's biography in Dakini Power illustrates, even contemporary women often were denied access to basic education, for one does not need these skills to bear children and herd the cows. It is no coincidence that there is currently only a handful of native Tibetan women traveling and teaching internationally. Of course there are few women teachers as long as Asian women are excluded from higher education. Thus the Geshema-exams send a powerful signal.

Also, the underlying issue why women weren't allowed to take the exams is that the Tibetan tradition doesn't allow full ordination for women and therefore the nuns did not have permission to study the entire curriculum. I think it is only a matter of time until we will see full ordination for women in the Theravadan and Tibetan traditions. As long as nuns are treated as second-class monastics, they can`t be fully included, but this is about to change and many women I spoke with are expecting a breakthrough in the next few years. There are probably about 400 million Buddhist women worldwide. Why would you exclude some of the brightest and savviest people on the planet from participating fully? The Buddha included women equally, so following in his footsteps means we need to do the same. 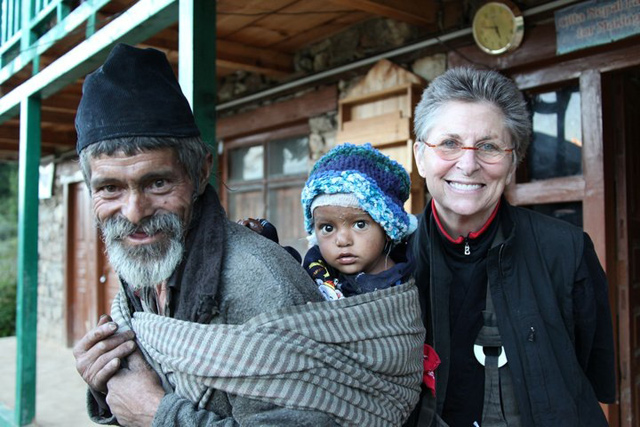 Roshi Joan Halifax, an anthropologist and activist, is the founder of Upaya Zen Center, a Buddhist monastery in Sante Fe, New Mexico. Here she is with a Nepali man and his baby at her Nomad's Clinic in Humla, Nepal. (Roshi Joan Halifax)

When I studied in Nepal and India, I became painfully aware of the epidemic problem of trafficking, abuse, and lack of education, especially for girls. I remember visiting a shelter for trafficking survivors and learning that their own families had sold them to traffickers, and then refused to take them back when they were suffering from life-threatening illnesses. They were shunned as damaged goods. When I returned to the West, I was researching ways to help. The international non-profit Lotus Outreach focuses on education, especially for girls. If a family does not have enough money to send all their children to school, they will most likely send their son, not their daughters. Keeping a girl in school makes her less vulnerable for trafficking, she is more likely to escape child marriage, and she is in a better position to make good decisions for her future. All the female teachers profiled in Dakini Power mention education as the key factor, and I am convinced that this is the single most important issue to focus on.

The women whose stories you share in Dakini Power come from a wide range of backgrounds, but all seem to stand as a testament to the power of belief over barriers. If there was one consistent or underlying message you learned while interviewing them for your book, what would that be?

All 12 women followed their intuition against all odds, made dramatic decisions, and sometimes had to fight for their survival in order to lead the lives they envisioned. All of them were criticized at one point or another — for being too conservative or too rebellious, too feminist or not feminist enough — yet they pulled through with immense bravery. What inspiration these women's stories offer modern spiritual seekers! What we can learn from these women is: Never give up! Follow your calling, and don't let others discourage you!