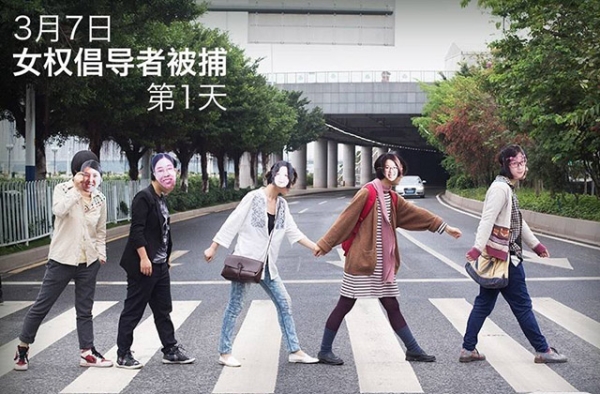 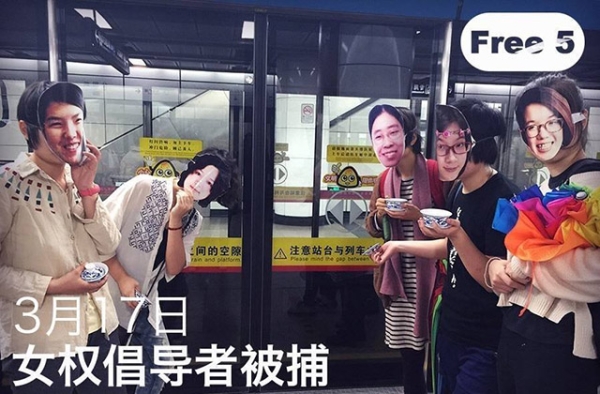 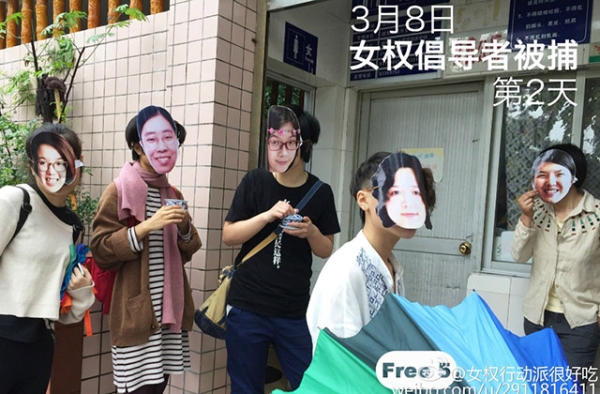 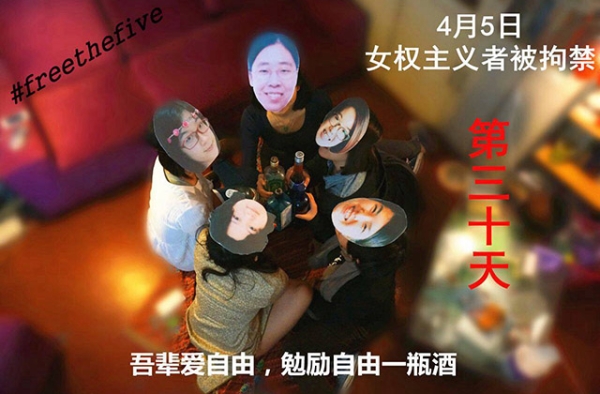 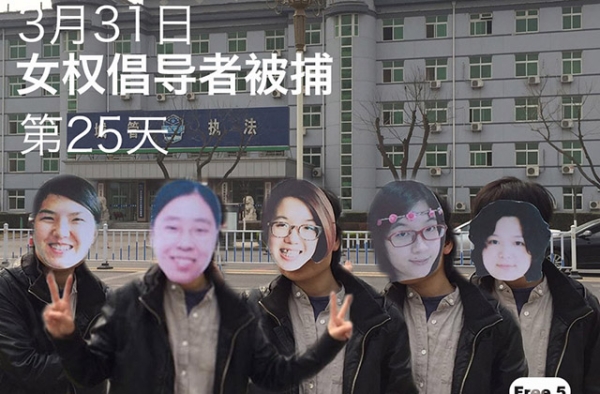 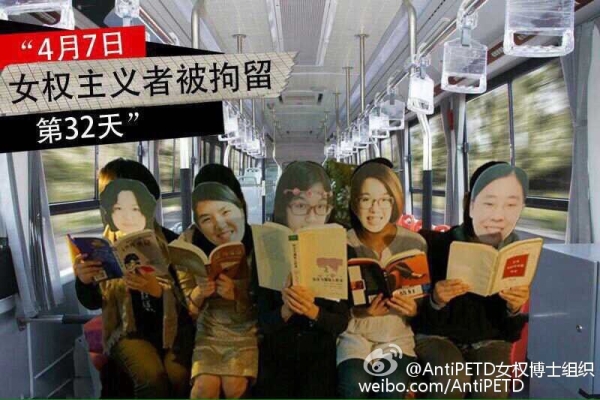 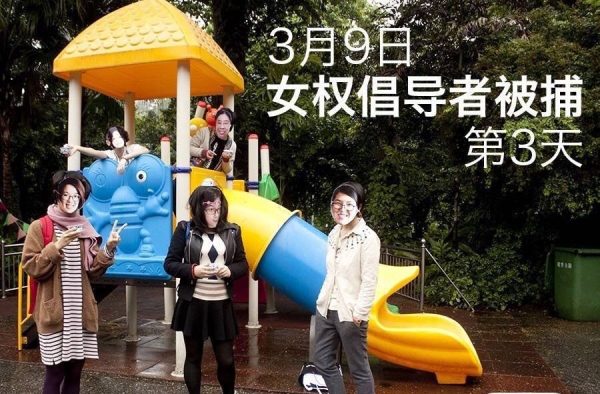 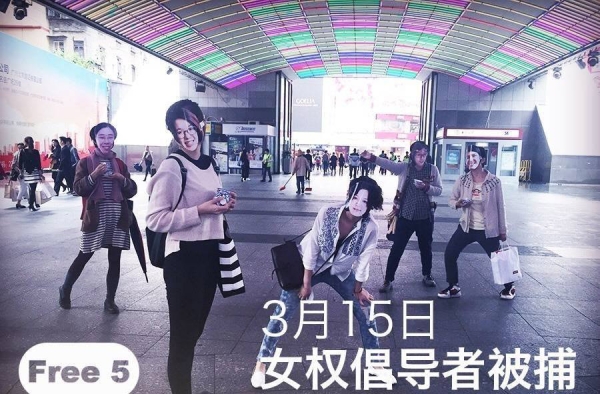 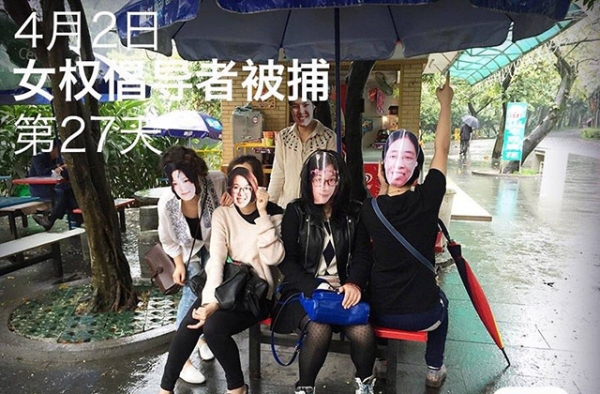 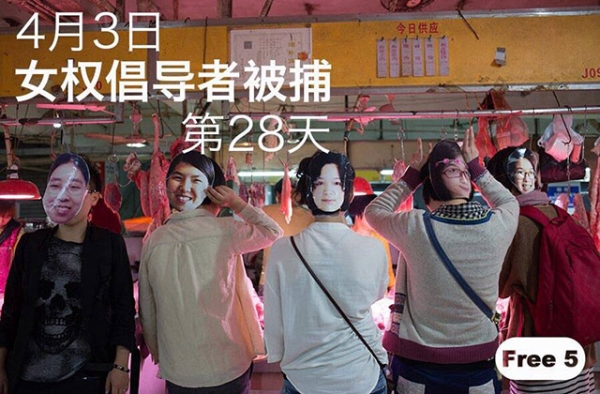 "Dark Days for Women in China?" In a ChinaFile conversation, analysts discuss what the recent crackdown on feminist activists signifies. Learn More

On March 6 and 7, ahead of International Women’s Day, feminist activists in three Chinese cities were arrested for planning to distribute stickers in public subways and buses that condemn sexual harassment. One month later, five of those women remain under criminal detention for “picking quarrels and causing a public disturbance” — a charge that could bring a prison sentence of up to five years if prosecution goes forward.

Soon after the arrests, a group of anonymous supporters in China began publicly donning masks with the faces of the five detained feminists and uploading photos to various social media accounts. The group has since inspired others around China to stage similar masked photos of themselves.

Asia Blog got in touch with a member of the original masked group who goes by the pseudonym Wu Tingting. She answered questions about her campaign via email.

Can you talk a bit about your background and those of the other women making these photos?

For safety reasons, I can’t talk about our specific identities except to say that we’re all feminist activists who have been paying attention to women’s interests for a long time. We are from all walks of life; some of us are students and some are workers from various places. We got to know each other through following feminist friends on social media and other Internet channels.

What prompted you to come together to create these photos?

We’re doing it to show solidarity with the women’s rights advocates that were arrested without any legitimate reason. They’ve done so much to promote women’s rights and they’re trying to make this country a better place with more gender equality. They have now been detained for one month and been deprived of freedom for one month. We hope through this activity to show our concerns and also make more people concerned for them. We want the five women to know that there are many people supporting them and we also want to show that it is impossible to arrest all feminist activists.

Why did you use the particular approach of wearing masks of the five detained women?

The places we choose are very normal, like small restaurants, parks, vegetable markets, shopping malls. The idea is to simulate those detained women living ordinary lives as free people. We also chose places like restrooms to commemorate their “Occupy Men’s Room” movement. When we take the pictures, some people are watching and are surprised, but we haven’t met any trouble yet.

The women you’re supporting were arrested for activities not much different from what you’re doing now. Are you afraid you could meet the same fate as them?

We are concerned for our safety, so we don’t reveal our real personal information. But we’re not doing anything unreasonable or illegal, so we’re not afraid.

How do you think these arrests will influence feminist activism?

I believe the arrests signal that the authorities are repressing feminism. There will be less room for feminist activities, but that won’t prevent us from pushing change within the limited space. Among the people who know about this case, there’s overwhelming support for these five feminists — including support from abroad. The government crackdown has infuriated many people. Of course, high pressure will create fear, but it also shows people why they should fight.

Note: The photographs accompanying this blog post were originally posted by the masked group to various Weibo and Wechat accounts, and appear here with the group's permission. Many of the images have since been deleted from those accounts.