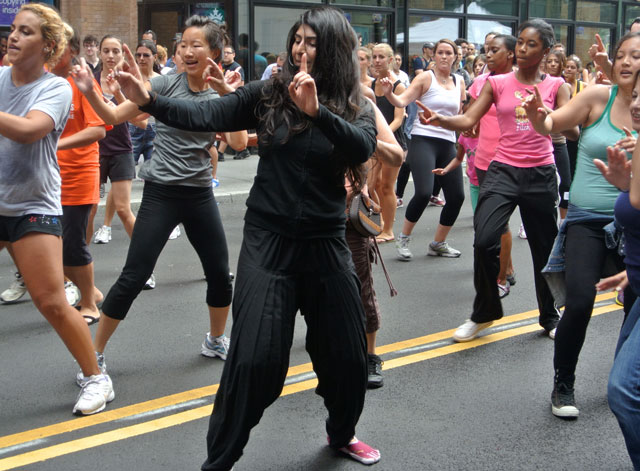 When Sarina Jain created Masala Bhangra in her garage, never in her wildest dreams did she think it would be named one of the top five workouts in the United States. Thirteen years later, Masala Bhangra is practiced in over 15 countries globally, including Japan, Germany and the United Arab Emirates, and Jain has released ten fitness DVDs.

"Masala" means spicy in Hindi and "Bhangra" is a Punjabi folk dance from India. The high-intensity routine combines energetic Bhangra moves with contemporary Bollywood dance steps. Participants can burn up to 500 calories per workout.

Dubbed the "Jane Fonda of India" by her students, Jain is the pioneer of bringing Indian dance to the fitness industry on an international level. After launching her first workout DVD in 2000, she relocated to New York to pursue her enterprise full-time. (In addition to being a certified fitness instructor, Jain is a publicist by profession.)

Born and raised in California, Jain and her family were active members of their Indian community, participating in temple events, fashion shows and bhangra competitions. Tragedy struck Jain's family when her father died of massive cardiac arrest at the age of 47. To pay tribute to him, she created Masala Bhangra, combining elements of her Indian heritage with her passion for exercise. "I have a vision that has kept me going and that vision is to make my father proud," says Jain. "It is an honor to be alive and I’m going to make the best of it."

Jain has been featured on ABC's The View, NBC's Today Show and The Dr. Oz Show. "Dr. Oz got down with us!" laughs Jain, "It was fantastic; he's a really nice man." Her fans include Deepak Chopra and Indian musician Jasbir Jassi, who gave her the Masala Bhangra theme song as a present on its tenth anniversary.

A frequent presenter at fitness conventions, Jain is often invited to teach Masala Bhangra in different countries. She leads several classes in New York, at such venues as the Alvin Ailey American Dance Theater and the New York Sports Club. On Saturday, May 11, she'll be hosting a Masala Bhangra session at SELF's Workout in the Park, an active lifestyle event in New York City's Central Park.

Over the phone, Jain discussed her journey as a female entrepreneur, global teaching experiences and passions other than fitness with Asia Blog.

How does one become the "Jane Fonda of India?" Tell us about yourself.

My parents migrated to America in the 1970s for a better life. My father made it a point to always speak proudly about Indian culture. When I was in high school, I started teaching aerobics as a side job. I have a lot of energy and I would expend it on teaching fitness!

My father's death was the biggest tragedy in our lives. I created Masala Bhangra to honor him and let him know that not only am I proud of being Indian but I am getting everyone to move desi [South-Asian] style.

I brought Masala Bhangra from California to New York and my students started calling me the "Jane Fonda of India." I look forward to meeting her one day, I'm sure she knows about me. Jane Fonda in the 1990s pioneered the fitness world and made it look cool. A lot of people told me that she revolutionized the exercise business and I'm the pioneer of bringing Indian dance to the fitness industry so I'm like the "Jane Fonda of India."

In addition to successfully establishing Masala Bhangra, you have also launched your own sari line. How has your experience been as a South Asian female entrepreneur?

Since childhood I've been wearing saris — I love their flow. Once I wore a Satya Paul sari known as the "Oogle" sari [a "Google-themed sari" with Google search results printed on it]. Not a lot of people can wear that sari and get away with it, but I did. I am a passionate and powerful woman and I was going to own it. I realized that I liked bold-statement saris. In 2010, I began creating my own saris. It's one of the most expensive ventures I have ever done. All my saris have a message — and that is no matter where you come from, respect who you are and be proud of it.

Being an entrepreneur is very challenging and being a woman entrepreneur even more so. You have to be very clear with what you want, then people listen. To me, the biggest key to entrepreneurship is networking. I was very young when I first started and I networked with a lot people. But a lot of it is also gut feeling. When you have a feeling and you know it's going to rock, then you have to keep going! The only way you're going to make a difference in this world is if you keep going no matter how many people try to stop you.

Masala Bhangra is now practiced in over 15 countries globally. Were there any countries that surprised you with their enthusiasm for bhangra?

The two countries that surprised me the most were Japan and Kuwait. I go to Japan twice a year and speak a little Japanese. When I went to Japan the first time, the amount of energy and respect they gave me blew my mind. They love working out, they love dancing, they don't even understand Indian music but they say balle balle [Punjabi equivalent of "Woo-hoo!"] proudly and they now teach it. I'm working a lot with Japan and just signed a deal with QVC Japan. Outside the U.S., I have most of my ambassador instructors in Japan.

The other country was Kuwait. I've been going there for three years. The lady who hosted me in Kuwait met me at a fitness convention in the U.S. and loved Masala Bhangra. On my first trip, about 150 females attended. I was completely blown away that I was about to rock it out in Kuwait with 150 women! Everyone either wore a hijab [headscarf] or was completely covered. As soon as the men finished setting up the equipment and left the room, the doors were shut and all the coverings came off. It was one of the most amazing experiences to empower these women without losing respect for their culture. They gave me their heart and soul. And when we were all done, they put everything back on and went about their lives. I now go every year.

What are some of your other interests besides fitness?

This will take a few hours! I enjoy life, I enjoy culture, I enjoy traveling, I read, I love spicy food and I love meeting people. On my down time, I chill with my family whom I'm very close to. The new thing in my life is my nephew, who is six months old. I'm the famous maasi [Hindi word for aunt] that travels all the time so I see him when I can. I'm also involved with leadership programs, I'm producing music and I started a sari line. There are many other things I'm involved in that get me excited!

What has been most rewarding about launching Masala Bhangra? What makes it all worthwhile?

When I launched my first workout video, never in my wildest dreams did I think I would have ten videos out by now! And I'm working on two more videos. Additionally, the fact that I got a show on Fit TV for five years was a huge break for me. I also signed a deal with Nestlé Fitness in Latin America where 2.6 million cereal boxes carried my fitness DVD in it. I flew to Switzerland to meet with them; they liked me a lot and made me the new face of Nestlé Fitness.