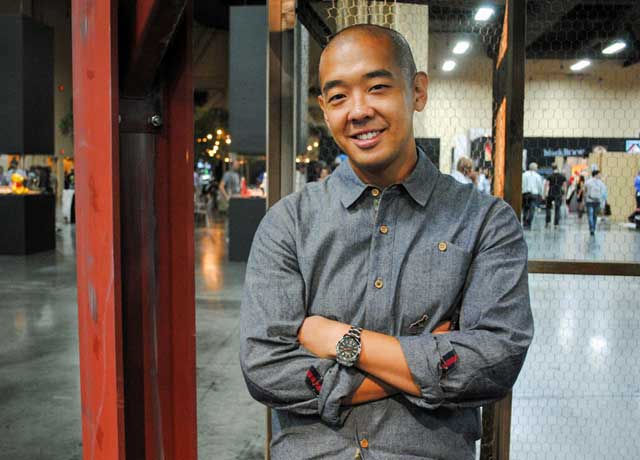 Jeff Ng (aka "jeffstaple") is an established graphic and web designer, curator of fashion and art, author, sneakerhead expert, and all-around creative visionary, based in New York. He founded Staple Design in 1997: now a well-known streetwear brand, creative consulting agency and retail store (Reed Space, which is 10 years strong). Some clients include Sony, Microsoft, Nike and Burton Snowboards. Over the years, Jeff has taken Staple's motto "A Positive Social Contagion" to whole new levels, spreading his instinctual design know-how and fresh knowledge across all media platforms and worldwide.

Do you feel your Asian American heritage has strongly impacted your life, or helped shape your career path at all?

Yeah, I definitely do think that being an Asian American, but even more importantly being a minority in this country, has strongly impacted my life. I grew up in a predominantly white neighborhood, city, and state in New Jersey, and I think the subtle characteristics of living life as a minority greatly affected who I am today, and is probably one of the biggest determining factors of who I am today, actually.

In terms of my career path, I think, not so much. It's more about my personality and who I am, than really the career that I've chosen. I think if anything, starting a company in the mid-'90s as an Asian American was a very rare, and uphill, battle. I think if I had been any other race than Asian American, it would have been easier to start a street culture or urban brand. So actually, often times I would try not to reveal what my identity was in terms of my race, because I didn't want to be judged on the color of my skin but rather on the quality of my work. So it hasn't really affected my career all that much. I haven't really used it as a plus or minus. I just never really put myself out there as a quote-unquote "Asian Designer"… I just sort of let my work speak for itself.

Well-known artists, celebrities and brands have come through the Reed Space (from Cody Hudson to Puma to Kobe Bryant), from when it was a tiny storefront. What was one of the collaborations/events you are proudest of, that made you go "yeah, we just did that?"

To be honest, it really happens on a monthly or bi-monthly basis at Reed Space. It's just amazing what we've done. I mean, this is our eleventh year and just to be here in business, in the same location, over a decade now, that's a true testament just in and of itself. Even if we did nothing but stay in business, it'd be something to brag about!

I think one of the things I'm most proud about was a couple months ago we had a pop-up store with a hip-hop group called Odd Future. Some of the people in the group that you might know of are Tyler, The Creator, Earl Sweatshirt, and Frank Ocean. They're a very progressive, up-and-coming group, and they chose Reed Space as a location to do their shop. And the response was incredible! We had probably two or three thousand people come through the store that day with the line wrapping around the block. It was amazing.

But the cool thing was just weeks later, the recording artist John Mayer chose Reed Space to host his pop-up store. And you couldn't have thought of a more diverse, polar-opposite audience and type of music, but it was really, privately, inside of me, a very proud moment, that anyone from Grammy-award winning pop artist John Mayer, all the way to super-progressive hip-hop act Odd Future, both felt that Reed Space was the place to represent them in New York City. That was a proud moment for me.

Being a creator of labels and mixer of brands, would you consider yourself an Asian American role model for other entrepreneurs, designers and creative types?

Well, I don't do this job to become a role model. I just do my job and people tell me that I'm their role model, or people tell me that I'm their mentor, even sometimes though I don't know who they are, which is really flattering. Extremely flattering and humbling, actually. But I have this strange fear — and this might come from being a minority — but I have this weird fear that if I ever actually identified myself as a role model, then it'd all fall to pieces. I just put my nose to the grindstone and just always work my hardest, and do (or try to do) what I think will move the needle and break the mold.

You know, I try to do things that are a little bit different and next-level. So if young people look up to that, that's really great, but even if they didn't look up to that, I'd still be doing the same thing. And I think that's the bottom line of how I work and how I operate. I don't really need the approval of other people to do what I do. Fortunately, for the past 16-17 years I have been getting approval, and that approval rating, so to speak, has been increasing, and that's really dope. But again, even if every single person hated what I did, I'd still be doing the same exact thing.

Are there any Asian Americans you admire or look up to?

Yeah, there are a lot. When I meet a fellow Asian American that's doing their thing, I never really sit and have that conversation with them like "Hey, what was it like growing up an Asian American?" I think we just look at each other and kind of give a secret nod, because we both know what it was like to grow up a) as a minority, and b) particularly as an Asian American. So there's that immediate respect like you know, you've come to this place, and it very likely wasn't a silver spoon in your mouth, and it very likely wasn't a coast. It was probably an uphill battle.

One of my mentors, John Jay, who's the senior partner/creative director at Wieden+Kennedy, was my role model before I knew he was Asian American! His last name was Jay and I just thought he was a white guy. And when I met him, and I obviously found out he was Chinese and Asian American, that connection was even more fortified. It also just went to prove again that the color of your skin really means nothing. I respected him for the work that he did, that's why I respected him. It wasn't because he was a Chinese guy doing that work, it's because he was a guy doing that work. When I met him and he was Chinese it was all the better, but it didn't make me respect him any more or any less. It was just like wow, it's awesome that he's Chinese.

I don't care about big things. I care about little things. I'd rather do a lot of little things forever than five big things and fizzle out. We do great things but they're not necessarily big, they're just great. It can be great and small. So the best thing to do is just keep in touch with us through our social media, that's where we like to talk about the things that we're doing. Definitely follow @jeffstaple. You can follow me, and everything I do on Twitter and Instagram.