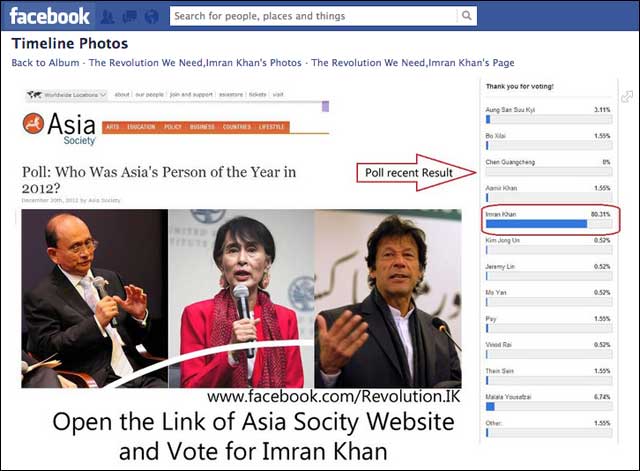 This image - of an Asia Blog post with a photo of Imran Khan added - uploaded to an Imran Khan Facebook page helped the Pakistani politician run away with Asia Society's 'Asia's Person of the Year' reader poll.

When we launched our Asia's Person of the Year 2012 reader poll last December, we were inundated with votes — so much so that we thought something was amiss.

In 2011, when our year-end poll made its debut, we received 881 votes, total. In 2012, not long after we went live with the poll, we were getting that many votes every couple hours. And more than 90 percent of them were for Imran Khan, the Pakistani cricket star turned politician who heads Pakistan Tehreek-e-Insaf, the political party he founded in 1996.

To be honest, we thought our poll had been hacked. This is not to say we didn't believe Mr. Khan to be a worthy contender. It was more an issue of self-doubt — we didn't believe our poll could possibly be that popular. We are just a little non-profit blog, after all.

So we actually reset our poll — twice — implementing new security measures each time. But the votes kept rolling in for Imran Khan.

We looked at the votes more closely. There were thousands of them after one night. We didn't see many repeated IP addresses. Could these votes be real?

And then we saw something on Facebook that caught our attention. One of the many Facebook pages dedicated to Khan created a post urging its readers to go to our site and vote. It was shared 170 times. It seemed Khan was the only poll candidate with a grassroots online get-out-the-vote campaign, and the results (and comments on the post) reflected that.

Over time, the rate of voting for Khan slowed, but not enough for any other candidate to overcome his huge early lead. At final tally, Khan had more than 11,000 votes, 88 percent of the total. Here are the final results:

NOTE: 1.4% voted for a write-in candidate (and many of those votes were also for Imran Khan).

A spokeperson from Polldaddy, the online polling service we used, told us, "It is possible to cheat in any online poll (whether on Polldaddy or otherwise) and it is impossible to fully prevent." So, we suppose that is still a possibility. But based on everything we've seen so far, we suspect the numbers to be legit, and the result of an extrememly passionate and social media savvy following for Imran Khan.

To learn more, we reached out to Dr. Awab Alvi, based in Karachi, who heads up the social media team for Khan's political party. (He's also an orthodontist, a prominent political blogger and a former Asia 21 Fellow. Follow him on Twitter here.)

Do the poll results come as a surprise to you? Why or why not?

I am delighted to have such overwhelming support for Imran Khan. The poll results don't come as a surprise as this is the passion of our supporters. These are individual people who are empowered to do their bit for the cause and feel this is their contribution toward Pakistan.

Do you know of any specific efforts to get the vote out for Imran Khan for the Asia Society poll?

I was not personally aware of who made the push for this poll, and to be honest I don't recall seeing it or voting on it, or even having our main social media team put any attention into it. It was done by passionate volunteers out to work for the cause and they do this as their own initiative to keep their audience busy. Hence, this is the true power we have — hundreds of volunteers working for Imran Khan.

We were overwhelmed by comments and votes for Imran Khan. Why are his supporters so passionate about him?

Why are the supporters passionate? Let me share why am I passionate. This might better reflect their sentiment. Pakistan is in a total collapsed state and I blame all our present leaders for having brought us to this stage. Each leader has blatantly looted to his heart's desire and unabashedly will stand in front of the electorate and ask them to vote for him again. For me, Imran Khan is my only hope. I truly do not see anyone in the field who can be a better choice to try to fix the affairs of Pakistan. Hence, if he is my best choice I will put my heart out to help him win.

For the past two years, I have devoted hundreds, if not thousands of hours working for this cause. I am a 100 percent volunteer, and a passionate volunteer. Nothing can sway me away from the cause I believe in: A better Pakistan. To achieve that, my conduit is to have Imran Khan elected with a majority so his team can deliver my dream of a better Pakistan. This is probably why we have so many passionate supporters — it's a patriotic cause. To them, they see Imran Khan as the only person truly committed to fulfilling this dream.

Who are his followers? What are the demographics? Who is his average supporter?

The demographics taken from Imran Khan's official Facebook page provide an example. The page, which has 570,000 likes, has 65 percent males and about 75 percent in the age bracket of 18-34. Generally, I think a similar popular base exists in real life as well.

How important are the internet and social media in spreading Imran Khan's message? And in what ways do you use it?

PTI is using social media as a marketing campaign. It is an arena we control and does not require massive investments from our end. To be honest, zero funds have been used for social media. Not a penny has gone into any form of social media advertisement to generate fans or likes for anything whatsoever. On election day it is a different story. What we hope is that via social media we can generate enough hype that our grassroots movement springs into action.

Each supporter makes his own effort to bring out the voters in his region. It's not difficult but we need to channel the energy so that they are motivated on election day. The figurative "tsunami" expression that Imran Khan uses truly unroots the status quo to bring about a positive change for Pakistan.

How does Khan's use of the internet and social media differ from other Pakistani politicians?

Khan symbolizes a message of hope for Pakistan, not only in real life but also in his actions and deeds. Khan and his supporters have been using this medium as a core tool from the beginning. For other politicians it is an afterthought. They need to hire social media workers to fabricate and then push their message. It is an artificially created social media environment, truly hanging by a twig. Their constantly swaying policies or blunders require a strategy to distract, and then the message is drummed up so that the mistakes are forgotten.

The problem with us is that we are volunteers. We can also be the voice of dissent as well as an uncontrolled movement that can highlight an issue on its own and possibly compel the leadership to listen. A prime example is the social media hype surrounding the Shahzeb Khan case in Karachi. It was social media pressure that pushed at least the PTI leadership to take notice and stand up for the cause. Imran Khan tweeted about it, and I believe it instantly got serious media attention to become an important example of how social media can raise important issues to our leadership.

Can online popularity lead to political prosperity in Pakistan?

Online popularity does not mean you win elections. It is to be treated as a marketing tool along with electronic media which will consequently motivate voters to come out to vote. We know that and we are preparing for a massive get-out-the-vote movement on election day.