Interview: How India's Media is 'Often Fearless, But Seldom Objective' 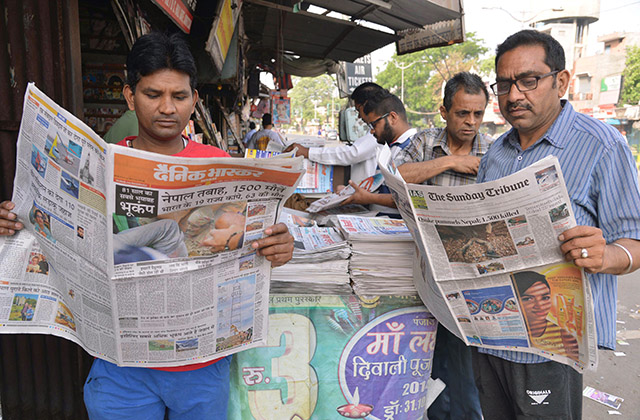 Amid a rapidly developing economy and society, India's press is undergoing shifts in how it influences the way Indians understand the changes unfolding around them. On July 15, Asia Society India in Mumbai will host a panel discussion on how media influences social change, and how the intersection of old and new media is transforming the processing of information. One of the panelists will be Santosh Desai, CEO and managing director of Futurebrands India Ltd. and a columnist who “looks at contemporary Indian society from an everyday vantage point” for The Times of India newspaper. In an email interview ahead of the panel, Desai discussed the highs and lows of Indian journalism and how technology is shaping the way young Indians look at the world.

How would you compare the objectivity and professionalism of India’s media compared to other countries in the region?

I’m not an expert, but I would imagine favorably on the whole. Journalism is better developed in some aspects, but in absolute terms, objectivity in particular is not a characterizing feature. The integration of media with the market has damaged objectivity. National print journalism is relatively more objective, but large swathes of regional media and much of television makes little pretense of being objective. Media is often fearless, but seldom objective.

In what way do you think the media has had a negative impact in India?

The idea of a muscular form of nationalism finds uncritical support in influential sections of the media. An atmosphere of righteous anger against ‘anti-national’ elements gets whipped up far too easily. Marked by an absence of any nuance, the classification of any form of dissent as being unpatriotic makes it easy for the state to act against even legitimate movements. Instead of acting as a guardian of civil liberties, media often ends up building a case against the idea of the right to oppose any dominant force of the day.

There continues to exist an ability and willingness to challenge the powerful, but the manner in which this is done tends to be uneven. It is difficult to escape the feeling that often both acquiescence and challenge are located in some form of self-interest.

Is there any example you can think of where the media has driven positive social change?

Although in a somewhat flawed way, issues relating to gender have become defining issues of the time, thanks to media. The coverage is skewed towards the middle class and its concerns but it is still an issue that has come to the fore in large measure due to the efforts of the media.

Going beyond traditional concepts of media, how is technology in general changing the way Indians look at the world?

Technology is without question a very significant force in India today. It is changing many implicit assumptions about, among other things, mobility, control, identity, and aspiration. Whether it is the mobile phone that is conferring on its owners a new meaning of identity that comes from having an address in the new world, or two-wheelers that give young women a sense of direct control over their circumstances, technology is dismantling — many fundamental assumptions on which society has been organized in India are being dismantled. The effects are far-reaching and profound, and barely understood. The digital world in particular creates a new pattern of change — one that does not have a recognizable center, and is thus often invisible, since influences get funneled through pipelines that cannot be seen on the surface.

For the young, technology creates an arena that is both private and public that allows for new modes of self-expression. It allows them to imagine realities that the older generation believes it has no access to. It opens out the self, and increasingly places individual imagination at the center of future possibilities.