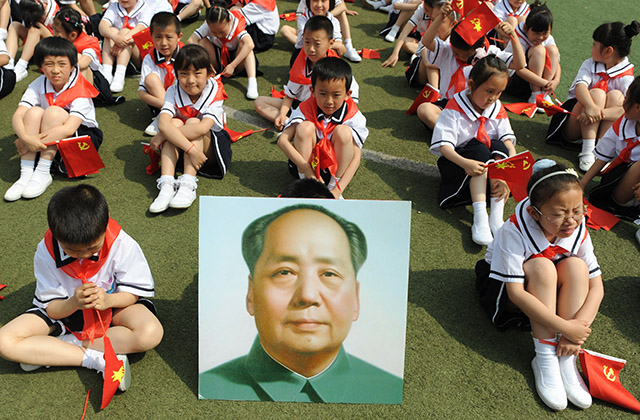 Children in Taiyuan, China in 2011 celebrate the 90th anniversary of the founding of China's Communist Party. (STR/AFP/Getty Images)

On May 27, Asia Society India will host an event titled “The Xi Jinping Ascendency” in Mumbai with Rowan Callick, author of Party Time: Who Runs China and How. Learn more

Popular memory and literature on China during the Mao Zedong era (1949-1976) tend to focus on Mao’s cult of personality and how his personal flaws upended the nation. But Stanford University sociologist Andrew G. Walder argues that this view is incomplete. In a new book, China Under Mao: A Revolution Derailed, he takes a new look at how the organizational and ideological factors that helped propel the Communist Party to victory in the Chinese Civil War also enabled the catastrophes that followed.

On May 21, Walder will join a ChinaFile discussion at Asia Society New York titled "Does Xi Jinping Represent a Return to the Politics of the Mao Era?" In an interview with Asia Blog conducted via email, Walder discussed how the Communist Party’s bureaucratic structure and Mao’s steadfast ideological beliefs led to some of the worst man-made disasters in Chinese history.

How does your book differ from others that have been written on Mao?

The book is not primarily about Mao himself, and does not focus on elite politics, which is the overwhelming focus of some of the best recent works on the Mao era, though I have drawn heavily on them.

But in writing about this period, you cannot avoid Mao; he towered over the period and directed almost all of the major developments. Instead, the focus is on China, and in particular on the impact of Mao’s decisions on Chinese society, economy, and the impact of events on ordinary people, as well as party members and officials.

Some recent writing on Mao and his era has emphasized Mao’s personal failings, and what the authors see as his cruelty, devious, and unprincipled behavior, and the writers seem implicitly to believe that Mao’s personal characteristics explain the frequently disastrous results of his rule.

Other writings leave Mao’s personal failings aside, and focus on politics at the apex of the political system. They single-mindedly chronicle the intra-party disputes, with Mao at the very center of the story, and they explain how these maneuverings led to policy decisions that frequently proved disastrous, like the Great Leap Forward and various stages of the ten-year Cultural Revolution. These same works also describe in some detail the impact of these policies on China.

These authors also assume a direct connection between the policies that come out of Beijing and the outcomes, then leave it to the reader to draw the connections.

Mao remains controversial to this day, being viewed as everything from a benevolent (if flawed) founding father to a Hitleresque madman. How would you characterize Mao and his motivations?

I do not portray his motives as stemming primarily from leadership rivalries, paranoia about plots against him, or by an intrinsically evil personality. I view Mao above all as a committed ideologue. Virtually all of his major initiatives flowed directly from a relatively simple set of ideological commitments that were fully formed by the late 1930s and that he subsequently refused to alter in any way.

I also portray Mao as a frustrated ideologue. He was unable to reach the objectives defined by his beliefs, and he was never willing to readjust or alter his bedrock views in the face of repeated failure.

Mao’s major initiatives: the Hundred Flowers Campaign of 1957, the Great Leap Forward, and the complicated twists and turns of the Cultural Revolution, all led to outcomes that, for Mao, were clearly unintended, unanticipated, and undesired. In each case, Mao was forced to change direction and back down in the face of failure. Mao did not purposefully set out to trap dissenters from exposing themselves to suppression in the Hundred Flowers of 1957. He did not purposefully set out to wreck China’s economy and induce a famine that led to the starvation of tens of millions of farmers in 1960 and 1961. He did not purposefully set out to cause the death of more than 1 million people during the Cultural Revolution, or to set back China’s economic development by a generation, ensuring that it remained one of East Asia’s poorest countries at the time of his death in 1976.

So why did his initiatives fail so badly compared to what he’d wanted to achieve?

The answer, in short, is first ideology, and second organization.

I have said that Mao was a committed ideologue, and that his actions are explicable in terms of his political beliefs…so what were they? Two key beliefs.

The first was evident in his writings going back to the mid-1920s, when he headed the rural department for both the CCP and Nationalist Party, reflected in his essays on the peasant movement in Hunan. In Mao's writings, history moves forward through violent conflict between classes — this is the motive force of history. Liberation of the oppressed cannot be achieved without violence, and while violence is not an end it itself, it is not something that a genuine revolutionary should shy away from. Out of disorder and chaos a new order will emerge. Mao really believed this, and acted on this belief until the end of his life.

The second is a set of beliefs that Mao absorbed from Soviet encyclopedia articles and textbooks from 1937 to 1939. Mao was a guerrilla commander who was basically untutored in Marxism-Leninism after he arrived in Yan’an, and he set out, with the help of secretaries like Chen Boda, to burnish his Marxist credentials into something called “Mao Zedong Thought” by reading orthodox Stalinist primers that had recently been translated into Chinese.

What were his big takeaways from these “Stalinist primers?”

Two main things, which shaped his understanding of how to build socialism after 1949: The first was that class struggle continues after the seizure of power by a communist party, and even after the socialization of the means of production removes the economic base of exploiting classes. And as Stalin insisted, class struggle actually intensifies as a country approaches socialism, because exploiting classes put up a last ditch fight to restore capitalism. This idea has long been mistaken as Mao’s distinctive contribution to Marxist theory, but it is a very old Stalinist idea — one that Stalin later ignored and that Khrushchev and his successors denounced.

This idea about class struggle under socialism had two important corollaries. The first is that policy debates within the leadership reflect a hidden class struggle. Those who want to move slowly and cautiously toward socialist development and who want to rely partially on market mechanisms and permit the survival of private property for a transitional period are in fact expressing the interests of former exploiting classes. Therefore, leadership disagreements are a manifestation of class struggle.

The second corollary is that the supreme leader decides what ideas are Marxist and what ideas are reactionary and capitalist. Those who disagree with the supreme leader are trying to undermine socialism, and may even be spies and traitors. This is the role that Stalin played during his life, and this is the role that Mao moved toward from the early 1940s on, and that he played with increased intensity after the mid-1960s.

The only way, in my view, to explain Mao’s actions, especially his Cultural Revolution, is by reference to these bedrock beliefs. He acted on them to the end of his life.

How did organization affect Mao’s policies?

The first organizational factor was a Communist Party that operated in a way reminiscent of a military organization. Mao had an ironclad belief in the absolute necessity of a highly disciplined and motivated party organization of absolutely dedicated cadres. This implied very harsh discipline imposed on party members and especially party cadres. Repeated rectification and purge campaigns beginning in 1943 made party cadres constantly aware of the very real possibility of purge and severe punishment.

Communist cadres were much more disciplined and highly motivated than officials in the loosely integrated Nationalist party and government. This was something that Chiang Kai-shek noted ruefully and repeatedly in his diaries from the period. This was a great strength of the Communist party, and a major reason why it prevailed in the Civil War of 1945-49. It led to Mao’s belief, manifested later in exaggerated form during the Great Leap Forward, that energetic mobilization of the party organization could achieve the impossible, despite seemingly objective constraints.

But there is a negative side to this internal discipline. The discipline exercised over party members and cadres was very demanding, and could be brutally harsh for those who failed in their commitments or who wavered in their duties. When analyzing political systems like China’s in the Mao era, we typically focus on the way that the party organization oppresses ordinary citizens — this is what we usually mean by dictatorship. But equally important is that there are even higher demands for conformity and fulfillment of one’s duty among party members and cadres, and that failure can bring harsh retribution. Cadres led lives of insecurity, and in some periods, extreme insecurity.

During the period after 1949 and especially after 1957, this was one of the main reasons why Mao’s initiative often backfired — party cadres were pushed to achieve impossible goals and were placed under enormous political pressures, and they over-conformed with their directives and went to extremes out of a sense of self-preservation. Thus, during the Great Leap Forward, they pledged impossible increases in grain harvests, reported false yields to make it appear that they had not failed, then forcibly sold too much grain to the state, generating a massive man-made famine. Later, during the Cultural Revolution, they manufactured false cases against alleged spies and traitors that went far beyond what Mao ever intended.

The current Chinese president, Xi Jinping, has been labeled by some analysts as perhaps the most powerful Chinese leader since Mao. Do you see any other parallels between the two?

Mao was a fundamentally different kind of politician. Xi Jinping is a nationalist; he is not at all interested in ideas about class struggle or fighting against capitalism. In a country where party officials’ families become fabulously wealthy, raising issues of class struggle would be very dangerous. Xi also is not at all interested in letting ordinary people rebel against authority, and he does not intend to draw on mass criticism as a way to discipline the Party. And the campaign against corruption is a very staid and narrowly legalistic attack on problems that are much much greater than anything that Mao ever had to deal with.

Xi is a conservative nationalist. Mao was a radical and a revolutionary. Xi wants stability above all; Mao saw disorder and conflict as the only way to move forward. So the parallels are entirely superficial.