Interview: Historian Erika Lee on the 'Traumatic' History of Chinese Immigration to the U.S. | Asia Society Skip to main content

Interview: Historian Erika Lee on the 'Traumatic' History of Chinese Immigration to the U.S. 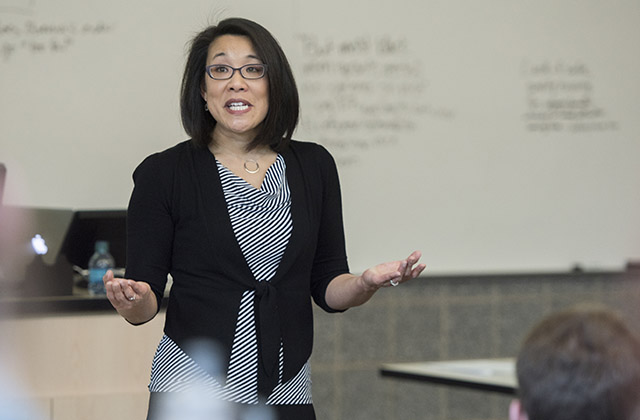 Historian Erika Lee of the University of Minnesota has been one of the preeminent researchers on the history of Asian immigration to the United States. Inspired by her own family’s experiences immigrating from China, she wrote the book At America’s Gates: Chinese Immigration During the Exclusion Era, 1882-1943, which explored how The Chinese Exclusion Act of 1882 transformed Chinese American lives, immigration patterns, identities, and families. In her second book, Angel Island: Immigrant Gateway to America, she discussed the largely forgotten Angel Island Immigration Station in San Francisco — sometimes known as the “Ellis Island of the West” — where mostly Asian immigrants were subject to much harsher treatment than their European counterparts entering in the East. Her most recent work, The Making of Asian America: A History, corrects the widely held misconception that Asian American history began with Chinese laborers in the mid-19th century, and illuminates a storied past of Asians in the Americas stretching back to the 1500s.

In an interview with Asia Blog, Lee discussed her family’s “traumatic” immigration experience to the U.S., how stereotypes of Chinese immigrants are shifting, and how Asian Americans remain “invisible” in many ways.

Even though you’re a historian, you’ve said you don’t consider yourself a “history buff.” Why is that?

No offense to those who do identify as history buffs, but in my experience, the people who do identify that way are really engrossed in what I would consider the standard narrative of American history — the presidents, the great wars, the things that we were all taught in grade school. We used to have those timelines that circle around the classroom. I remember looking at those and thinking, yeah, I guess this is interesting, but I really have no connection to this history. It was just about these great men and I knew America was much more diverse — African-Americans, women, workers. I was much more interested in what we now call social history — the history of everyday people, and I just didn't get that from most of my schooling.

So the light bulb for me was when I first did get to study that kind of American history — the history of labor, the history of immigration, and then the history of Asian Americans. Especially when I got to the history of Chinese-Americans and the exclusion laws, there was this moment of disbelief — a moment of "I can't believe this happened" — that the Chinese were rounded up, they couldn't marry whites, they couldn't vote. I had no idea that this institutionalized discrimination existed, and it explained some of the ways in which I thought my family kind of kept to themselves and was always worried about not crossing the line, being careful, and “doing what you're told.”

That realization sparked so many things in my mind, like what else happened that I don't know about? And who's writing about this? Why can't it become more essential to American history? Why can't it also be included in those classroom timelines? And if there's not enough people doing it, then maybe this is something that I can do. It's really been the driving force of my professional work to recover those lost histories, and not just include them in some happy multicultural rainbow of American history, but to really impact and change the way that we understand what America is, for better or worse.

How did your own family background influence your work?

All of my grandparents on both sides of the family were immigrants themselves, so growing up, I thought I was third generation in the United States. However, as I started researching for my dissertation, I realized that on one side of the family we go back three more generations. My great-great-great-grandfather had been one of those early Chinese immigrants who came over with the California Gold Rush (1848–1855). This made me realize that my family has deep, deep roots in the United States — from before the Civil War. He was part of that early group of Chinese immigrants in the United States. Not only that, but he left California for New York and helped open one of the first businesses in Chinatown.

This discovery was, I don't even know how to say it — astounding, eye-opening, revelatory. For some reason, Asian Americans, no matter how many generations we are in this country, we always get that question: “Where are you from? No where are you really from?” We're just constantly placed outside of America, and to realize that I could turn that question around and say… "you know what? My family has probably been here in this country longer than you and your family have been." That was again another kind of turning point, and I guess it made me more frustrated with those questions.

But as part of that history, I also realized how much was lost, how much trauma there was, and how many secrets there have been. After all, family had to immigrate under the exclusion laws. There was undocumented immigration, there were fraudulent identities, there were family members left behind. That was very traumatic. Those scars are very common amongst this older generation of Chinese-Americans. Those scars took their toll, and we didn't talk about our family past, we didn't talk about how we came. It was a focus on: “It was hard, but we did it for you, so you'd better live up to the sacrifices.” And “You're going to have two strikes against you, but you'd better rise above."

I think that's the background that many Asian Americans pre-World War II lived under and it was clearly passed on generation-to-generation.

You mentioned the “trauma” that your family experienced. Can you elaborate on that?

During the exclusion laws, the vast majority of Chinese were barred from immigrating to the United States. Chinese laborers were barred, but if you were a Chinese merchant, student, teacher, diplomat, or a merchant's son or the child of a U.S. citizen, then you could at least apply for admission. But then you were put through the ringer. You were interrogated for hours, sometimes days. Your interrogations were then cross-referenced with witnesses who could be called on your behalf.

My grandfather was an orphan and he claimed he was a merchant's son. That was a lie and he bought papers, which was extremely common during that time because it was really the only way you could come in if you were Chinese. He eventually regularized his status and became a naturalized citizen when they granted Chinese “amnesty” during the Cold War — though they didn’t call it that at the time. By that time he kind of bragged about it: "Yeah, they tried to keep us out but I got in!"

On the other side, my grandmother whose great grandfather had come over during the gold rush, she had been left behind. She had been abandoned. Her father could only bring two kids with him. He brought his son and then gave my grandmother's slot to a nephew. And because of the way exclusion laws worked, that totally barred her from any chance of coming as his daughter. So she never talked about how she did end up coming. We all knew that you just don't ask. Don't ask her about her family, because it was clearly very traumatic.

Frankly those two experiences aren't uncommon — they do represent the range of Chinese American immigration experiences during those times.

Chinese have now surpassed Mexicans as the largest group of immigrants entering the United States each year. What sort of implications is this having?

It is really complicated today. On the one hand, there's so much fixation on the so-called "Mexican illegal problem," which doesn't match reality since Mexican immigration is at a net zero — there's the same number of people leaving as there are coming in. So on the one hand, people aren't as fixated on the rise of Chinese immigration — it's a different group that seems to be the main "problem."

However, you do see a little rhetoric and hints at some possible hostilities rising to the surface. As I go around the country talking, especially at universities, some of the questions are related to an unease or anxiety at the growing numbers of international students from China — the way in which they seem to be coming and wanting to live in luxury apartments. Some people say they're driving up rents, or they’re conspicuous with their fancy cars, and perhaps they're not serious students. There's a little bit of backlash. It's a really interesting dynamic since the stereotype is very different from a century-and-a-half ago when it was the "uncivilized Chinese laborer" who was taking away jobs. Now it's a signal of China's growing power and wealth and unease about what that means for Americans.

Another issue that’s growing is the cases of Chinese born scientists who are naturalized Americans that have been accused of espionage. So there's growing anxiety and it’s definitely something that as a historian I see as troubling. I worry about what's going to be coming down the pipeline.

Asian Americans have traditionally voted at a lower rate than other minority groups. Do you see this shifting at all, and is there anything about this year’s election that is especially engaging this group?

We're seeing great strides. We're seeing more young Asian Americans who are politically active, running for office, being activists in the Dreamer movement, being activists in the Black Lives Matter movement. So there are lots of ways in which Asian Americans are politically active both in terms of an electorate and in terms of activism, and that's a great thing. This year, I think the anti-immigrant xenophobic tenor of our political discussions is also promoting more activism.

In doing your research on Asian American history, what’s an event or trend that you’ve found particularly surprising?

Unfortunately, I think it's about the continuing invisibility of Asian Americans — not just in history, but also in contemporary life. Asians are now the fastest growing group in the United States, the Chinese are now the single largest immigrant group, and Asians are the fastest growing population of undocumented immigrants. You never hear about these things. And when we don't take the issues and needs of Asian Americans seriously, then we miss a large portion of the American population. These problems persist and just create a myopic understanding of how we see our contemporary world today.

When we think about race, we think about ongoing achievement gaps for African-Americans, income inequality, mass incarceration … these issues face Asian Americans as well. So that is one of the more troubling aspects I concluded over researching 500 years of Asian American history. Yes, a lot has changed, but there's still so much more to uncover, to push to the center, to continue to debate, and think about how to solve.