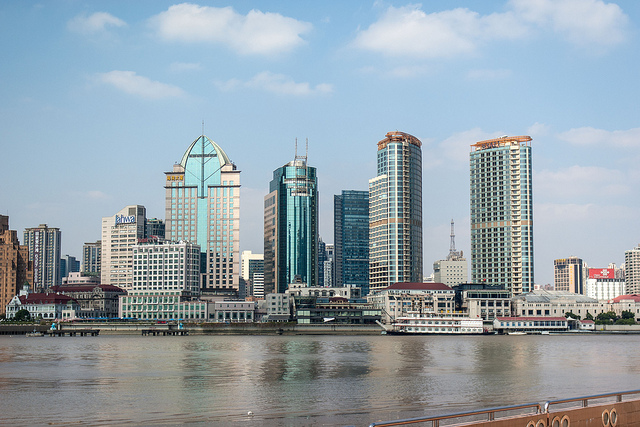 The skyline in Shanghai, China, on Oct. 19, 2012. Shanghai now has more skyscrapers than New York City and its population, currently estimated at 18 million, is forecast to reach 25 million by 2020. (Thomas Fischler/Flickr)

This month Asia Society Associate Fellow Jeffrey Wasserstrom, China expert and Professor of History at the University of California-Irvine, is coming out with an updated version of his book China in the 21st Century: What Everyone Needs to Know (Oxford University Press), originally published in 2010. Since three years is a long time in rapidly changing China, we were curious to know what changes he made to the text to make it as relevant as possible for today's readers.

Since the writing of your book China has gone through one of its ten-year leadership changes with the entrance of the Xi Jinping administration. What did you feel people needed to know about a new government that has declared its focus to be fulfilling the "Chinese Dream?"

When I began the updating process with Maura Elizabeth Cunningham, who joined me as a contributing author on the second edition, we knew that this transition, long in the works, was something we would need to address. In the end, though, we saw more continuity than change in the hand-over of power from Hu Jintao to Xi. His actual taking charge was singularly anti-climactic after the dramatic rise and then rapid fall from grace of Bo Xilai, a series of events that we treat in some detail. And while his "Chinese Dream" slogan may be new, many other things he's done, such as calling for a curtailing of corruption, give us a strong sense of deja vu, as they parallel things Hu said and did right after he took over back in 2002.

China's former government, and specifically Premier Wen Jiabao, have noted that despite huge economic advancements for the general populace, many Chinese citizens are not reaping the benefits of progress. Has disenchantment around China's wealth been growing in recent years, or has the government managed to temper feelings of disillusionment?

A key point to keep in mind is that anger in China over wealth tends not to be about disparities between rich and poor per se, but rather disgust at people getting ahead due to corruption and connections with those in power. This has run high for decades now — it's sometimes forgotten that some of the first 1989 wall posters were criticisms of nepotism rather than calls for democracy — and shows no sign of abating. It doesn't help, meanwhile, that exposes have come out showing just how deeply enmeshed in webs of corruption the families of top leaders are — even the families of some that call most loudly for officials to behave themselves. Last year alone there were high-profile reports, for example, detailing the vast wealth of Wen and Xi's families.

Some of your research and writing has dealt with student protests and social movements around issues such as the environment in China. What has changed since the first edition in terms of social unrest, if anything?

The most important shift has been the increasing importance of environmental protests and what might also be called quality-of-life ones. A wave of Not-In-My-Backyard (NIMBY) demonstrations had already begun to gain steam by 2010, with successful demonstrations against a chemical plant in Xiamen and similar actions in a few other places, but by the start of 2013 many cities had seen at least one, some several. We still aren't seeing a resurgence of student activism, but we are seeing these draw a lot of support from young people. In addition, these protesters, unlike some others, are often people who have been doing fairly well materially yet are wondering if being able to buy more things means that their life is getting better, if they have to worry about the health of their families.

You're a historian, but you also follow and blog frequently about current events. We're wondering what events might have made the book even in the few months since it went to print?

Well, in the last couple of weeks alone, we've seen three events take place that might deserve at least a mention in a third edition. There was Barack Obama's meeting with Xi Jinping, which I've just written a commentary on for the History News Network, focusing on, of all things, the symbolism of the clothes they wore. And more recently still, the news broke that Edward Snowden had fled to Hong Kong and that Chen Guangcheng and NYU officials had radically different stories to tell about the relationship between the activist-turned-dissident and the school.

The Snowden and Chen events are totally different, of course, but two connections between them intrigue me. One is that, if you'd asked me a year ago what Chinese news story had the most hard-to-wrap-your-head-around, stranger-than-fiction quality, I would have said it was that of a blind lawyer escaping from a tightly guarded house and making his way a long distance, with a broken leg no less, to the American Embassy in Beijing. Ask me now and I'd say it's that of a former NSA contractor ending up in a part of the PRC — albeit a very special one — and giving interviews there criticizing the United States for having come to personify the thoroughly modern surveillance state.

The other connection between them is that both reveal just how complexly intertwined China and the United States have become — to the point that nearly every news story about one place has some link to the other.