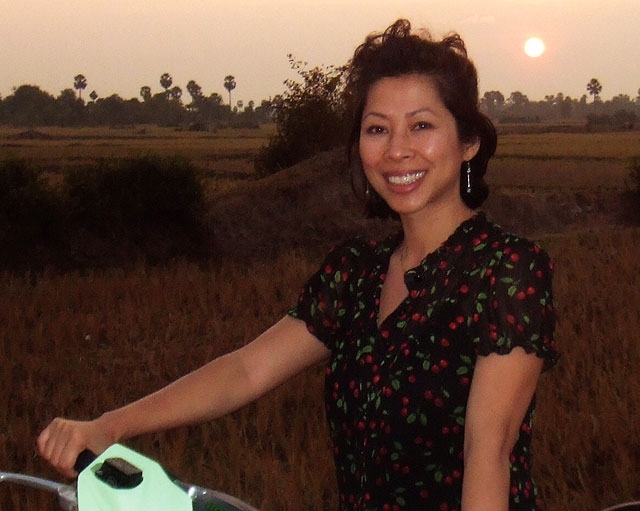 "Whatever your situation, it is possible to reclaim your light, life and laughter." This is the conclusion of Loung Ung's latest book, Lulu in the Sky — one whose truth she knows better than most.

As a survivor of the Cambodian genocide, Ung has faced her share of pain and loss, the story she laid bare in the memoirs First They Killed My Father and Lucky Child: the deaths of her parents and two siblings, transitioning to life as a refugee in America, and her hard-fought path to quell the demons of her past. Through her story, readers have stood witness to the horror of war, the struggle to reclaim one's identity, and the power of family bonds.

Although the trauma she has faced may seem insurmountable, it should come as no surprise that Ung herself is much more than the pain of her past. Lulu in the Sky brings full circle the author's journey through loss, recovery and reconnection. She takes us from the hollowness of depression to the beauty of forgiveness and the oftentimes messy path to love — proving along the way that human beings are able to rise from the lowest depths and embark on a journey toward true love and happiness.

Loung Ung appears at Asia Society New York on Monday, April 23. For those who can't attend, the program will also be a free live webcast on AsiaSociety.org/Live at 6:30 pm ET.

Asia Blog spoke with Ung by phone prior to her New York appearance.

How do you maintain, and how will successive generations of Cambodian Americans maintain, their Cambodian heritage?

I go back to Cambodia. It is so important to spend time there; not just to read about the temples but to walk the land and feel a sense of pride in its history. When you read about Cambodia, you can gain a sense of its beauty but I encourage people to walk through the 2,000-year-old temples and experience the history themselves. The country has a really rich history.

In addition to studying, I encourage people to go back and eat the food, learn the language and meet the people. It is a beautiful language to speak and it breaks down barriers. Everyone is so happy to meet another person that takes the time to learn their language. For the generations who came to the U.S. on their own or were born here, that part is often lost. You need to learn about the food, land, and culture. It is a great way to keep your heritage and pride.

Can Cambodia and Cambodians break away from being defined by the Pol Pot genocide?

They already have. Cambodians have already begun to slowly redefine themselves. Understanding that Cambodia is a country with a 2,000-year-old history, the genocide was only a four-year blip of that timeframe. I have friends who are musicians, artists and writers who are redefining themselves in these different fields.

The country as a whole has been as well. We are known again for our mastery of architecture and temples, richness of music and dance, and food. For example, if you look at films from the '80s, the only film widely known about Cambodia was The Killing Fields, but now movies like Tomb Raider are being filmed there. We are becoming better known for things other than the genocide. Just look sideways and you see all the things Cambodia has to offer.

Do you think that the International Criminal Tribunal is making a significant difference in bringing closure to the country's past?

Closure is a difficult word to define. I like to think in terms of healing. Closure suggests there is a beginning and an ending to a healing journey, and I do not believe that is the case. There will never be an end. There will never be a time when I am not sad about what happened to my family or feel anger at the injustices committed by the Khmer Rouge.

This is a journey of adapting and learning. Although closure may not be possible within any justice system, it is a great tool to learn about what happened and to give those silenced by war a forum to tell their story. When you keep the trauma inside, it is anger-making and it begins to drive you. The tribunal provides time and space to be heard, to learn from each other, and to translate information and stories for the next generation. Like many other survivors of trauma, it has been difficult to open up. The tribunal is more than seeking justice, but is a forum to empower survivors and victims.

You mentioned in the book that you never discussed what roles the men at the Vietnam Veterans of American Foundation played in the Vietnam War. Do you think it would change your view of them or their work if you had known?

I don't think so. I believe that we have the ability to change. The men I worked with, when they were in Vietnam, were so young. Some of them were in their teens and early twenties. We trained them to take life and then put them in situations where their lives were in danger every day, every moment. When I met the veterans, I saw that they were wonderful souls looking for healing, redemption, and to make the world a better place and I admire that. They are inspirations because they show how someone can come from a place of hurt and make the world better.

What do you hope readers take away from your latest book?

Since writing First They Killed My Father, I have received so many letters from people who are concerned about me, wishing me well and asking if I found love, happiness and healing. I am so grateful that they care, but their questions indicated to me that many wonder if it is possible to be happy and be on the path to healing after losing so much. I wanted them to know that it is possible to retain your happiness, joy, and purpose after you have lost and suffered. Whatever your situation, whether you have been a soldier or experienced violence or trauma, it is possible to reclaim your light, life, and laughter. You can be OK too. I'm not saying it will be easy, but you can be OK too.

Cecily Kamps is the Program Assistant for Asia Society Global Policy Programs. She holds a master's degree in diplomacy and international relations from the John C. Whitehead School at Seton Hall University and is a native of Cleveland, Ohio.