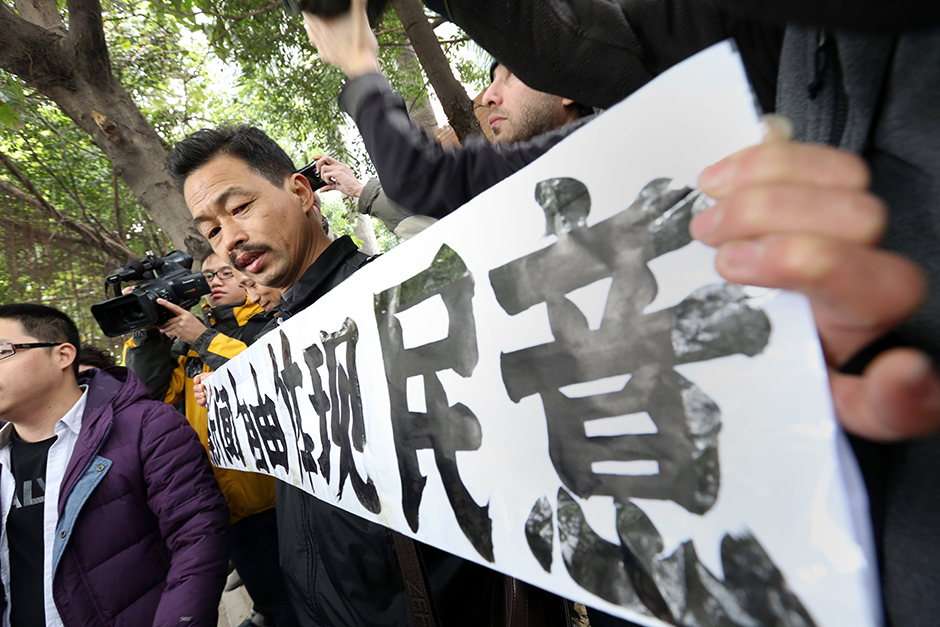 A protester whose banner reads “Freedom of the Press Reflects the Public’s Opinion” outside the Southern Media Group headquarters in Guangzhou on January 9, 2013. (AFP/Getty Images)

The year 2013 has gotten off to an inauspicious start for China’s press, especially for its most outspoken members. At the end of last year, when many of the country’s media were heralding newly installed Chinese leader Xi Jinping’s visit to Guangdong province as a modern day analogue to Deng Xiaoping’s 1992 “southern tour” (which was itself modeled to recall the glories of his imperial predecessors), the local newspaper, Southern Weekend, tried to frame Xi’s trip slightly differently. Editors at the paper — which has long tested China’s limits on expression — took six quotes from Xi’s Guangdong speeches and turned them into headlines, each calling for reform, no matter how difficult.

China’s new leaders had yet to introduce any specific reform policies, and the difficulties entailed quickly became manifest. Two weeks after Xi’s “new Southern tour,” officials at the Guangdong propaganda department broke with precedent to rewrite the Southern Weekend’s New Year’s editorial and force the editors to run it. The original had called for constitutional democracy. The rewrite cut that part down to one sentence and instead extolled the Party’s unique role in “the rejuvenation of the Chinese nation.” The Southern Weekend staff regarded the official meddling as a severe threat to the paper’s longstanding spirit of independence and went on strike. Support for the paper flooded the Internet and took to the streets.

The tough official measures weren’t confined to Guangdong. In Beijing, the website of Yanhuang Chunqiu, a pro-reform history journal, was shut down on January 4 (the day after Southern Weekend was forced to print the altered New Year’s editorial) after its own New Year’s editorial also called for constitutional democracy. As a countermeasure at the national level, the government ordered almost all major newspapers to reprint an editorial by the Global Times, a nationalist tabloid owned by the Chinese Communist Party’s official mouthpiece, People’s Daily. The Global Times editorial blamed the Southern Weekend staff’s protest on manipulation by “foreign forces.” When Beijing News editors tried to refuse to print the Global Times editorial, they were visited by Beijing propaganda officials who saw to it that their orders were enforced. In protest, Dai Zigeng, publisher of the Beijing News, immediately announced his resignation.

Why did all this happen, and what does it all mean for the future of the Chinese press? ChinaFile talked to Chang Ping, former news director at the Southern Weekend who was in charge of the newspaper’s news, opinion, and New Year’s editorial from 1999 to 2002. (Chang Ping is a pen name for Zhang Ping.) In 2008, the Central Propaganda Department denounced his articles about unrest in Tibet and forced him to leave his post at Southern Weekly, (the Southern Weekend’s companion magazine) where he had risen to the post of deputy editor. In 2011, Chang Ping applied to work in Hong Kong, but the government there never replied to his application for a visa. He is now living in Germany.

The government has been meddling with Southern Weekend for a long time. Why did it trigger so much resistance this time?

State suppression of Southern Weekend has always been more severe than outsiders imagine. The newspaper was criticized every week I worked there more than ten years ago. The change came when Hu Jintao’s administration established its “stability maintenance” (weiwen) system. Before that, the Southern Media Group (publisher of both Southern Weekend and Southern Weekly) observed an unwritten rule that it would not allow the Guangdong provincial propaganda department to intervene in the newspaper’s editorial policy or personnel decisions, and the Group itself refrained from editorial interference at its papers, Southern Weekend and the Southern Metropolis Daily.

However, beginning in 2002, both the Group and the propaganda department directly appointed Southern Weekend’s editors-in-chief and forced the departure of the staff who had been the paper’s backbone.

From that point on, censorship at Southern Weekend operated much as it did for other Chinese media: the propaganda department sent editorial directives [to restrict or mandate] future stories. After pieces were published, the department reviewed and appraised the articles and criticized or punished their reporters and editors. But recently, the propaganda department added another procedure in between: it ordered Southern Weekend to disclose which stories its reporters planned to work on, and began to review and censor articles prior to publication. According to sources on the inside, 1,034 articles were censored prior to publication in 2012. It’s much worse than before. The New Year’s editorial incident may look like an isolated event. But actually, the protests resulted from longstanding grievances due to rigid censorship.

How have Chinese journalists responded to this kind of control? Have you seen examples of effective resistance?

Actually, resistance to news blackouts has always existed within the Southern Media Group. People used to think, incorrectly, that the resistance was due to the open-mindedness of Southern Media’s leadership. They may be more open-minded than their counterparts around the country, but their open-mindedness is not what’s most important. They have to be open-minded because the editors and reporters below them force them to be. The staff reporters push back against the middle-level cadres. The middle-level cadres push back against the higher-level leaders. This is a tradition at Southern Media and it draws idealistic youngsters into the paper’s ranks and their presence makes resistance to news blackouts even stronger.

I witnessed this resistance in 2006. The leadership of the Southern Metropolis Daily had decided to replace the editor-in-chief and the staff objected. They went to see the publisher and demanded he rescind his decision or they would go on strike. The publisher immediately relented.

Why does it seem like censorship is getting worse?

You are correct. Over the past decade, the rapid development of the Internet has led people to believe there will be more space for speech. But the constraints [on the press] have actually gotten tighter. Fortunately, journalists are resisting. Otherwise, it would be worse. Now, the government’s domestic strategy is to maintain stability. Hu Jintao once said China should learn from North Korea, and sent people to investigate the Eastern European system. Although this trend began in the Jiang Zemin era, the Hu and Wen administration furthered it, regardless of the cost. For example, they bought the most advanced Internet surveillance technology, say, from CISCO. Internet companies like Sina and Tencent have struck a deal with the authorities — or you might call it collusion. In order to secure their business interests, they spend huge amounts monitoring social media. The progress I mentioned earlier is being rolled back and the space society has carved out for free expression is being constricted. Moreover, the “stability maintenance” system is making social management crueler. For example, the way law enforcement handles petitioners and property demolition is becoming ever more gangster-like. Although the media tries to fight, it can’t be a counterweight to the giant “stability maintenance” machine.

Do you think the new leadership will continue to use the “stability maintenance” system?

Many people hope the leadership transition will bring about change. But, we haven’t seen any tangible change so far. I don’t think it was Xi Jinping who made the decision [to crack down on the media], because as long as the “stability maintenance” system is up and running, things get tighter and tighter. However, some of Xi’s recent speeches are pretty far from calls for real reform. His inclination to reform is suspect, especially when he refers to the Cultural Revolution as a “socialist exploration.”

Do you think new media, such as social media, can further China’s freedom of speech?

New media by itself is a tool. What is more important is how it is used. The government definitely wants to use it to control and steer public opinion. And, indeed, they are spending hugely on it. People in society hope social media will expand the space for expression. It’s not clear how things will turn out. New media might become society’s tool if society uses it more aggressively. For instance, in the current Southern Weekend and Yanhuang Chunqiu cases, new media played an important role. Without new media, it would have been unimaginable for the propaganda department’s work to have been exposed.

What influence will the Southern Weekend incident have in the long run?

Moreover, while the original Southern Weekend New Year’s editorial proposed reform subtly, in a way acceptable to the government, the propaganda department’s intervention triggered resistance from the public and demands for constitutional democracy and freedom of speech. And these demands were resoundingly clear.