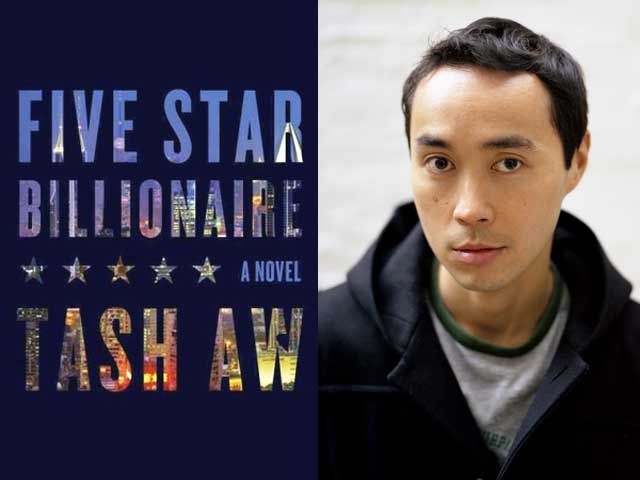 Five Star Billionaire, Tash Aw's beguiling and meditative new novel, centers around the lives of five Malaysian-Chinese immigrants who move to Shanghai in pursuit of the glamour and abundance promised by China's economic ascendance. Amid the opulence, his characters encounter the modern, bustling metropolis in very different ways. Aw's third novel has received critical acclaim from such sources as NPR ("a richly drawn landscape of compelling characters") and recently made the long list for England's prestigious Man Booker Prize for Fiction.

Aw is also the author of The Harmony Silk Factory (which won the Whitbread First Novel Award in 2005) and Map of the Invisible World. Aw was born in Taipei but grew up in Kuala Lumpur, Malaysia. He currently resides in London.

Asia Blog chatted with the author about the origins of his novel, being an overseas Chinese (huaqiao), and Asian-style capitalism.

Your previous novels take place in the past — The Harmony Silk Factory during WWII and Map of the Invisible World during the turbulent period in 1960s post-Independence Indonesia. What led you to write about present-day China's modernization? How was the writing process different than some of your earlier works?

What drives a lot of my writing is the urge to explore the way Southeast Asia has changed over the last 60 or 70 years, to examine the fears and aspirations that have marked the major turning points in our recent history: the uncertain emotional space that we inhabited prior to WWII, for example, which marked the beginning of the end of colonialism; or the violently conflicting passions that filled the decade following Independence.

It strikes me that we have been living through a similarly momentous period over the past ten years or so, with Asia redefining itself in opposition to the West, and also in aggressively economic terms. I couldn't ignore the way China drives all development in Asia today, both economic and social. Its rise is spectacular, thrilling and frightening, and — above all — inextricably linked to migration, which is a theme I keep returning to in my work. I'm also fascinated by the way Asians see China — which is very different from the Western point of view — as well as by the whole question of how Asians look at each other, which is relatively unexplored in literature.

People of my generation saw hope in the West; young Asians these days see opportunity in China. It seems to me that the American Dream is meeting its first serious challenger. I felt I had to write a novel that attempted to address these issues. The writing process wasn't very different from that of my earlier novels, except that I spent less time researching archives before putting pen to paper. The bulk of my research, regardless of the era I'm working with, involves talking to people, hearing their stories, and allowing those human experiences to filter into my work.

Does your personal history seep into the narrative?

I try to keep my own circumstances separate from my work, but I guess that my personal history inevitably ends up in my work. I'm drawn to characters who fall between the cracks, who don’t occupy one single, clearly defined cultural or emotional space, and who often move across geographical spaces, and I guess that is necessarily influenced by my own background. The characters in Five Star Billionaire are all close to my age — some of them share details of my own upbringing. That's probably the closest I’ll ever come to autobiographical writing.

Identity is a central theme in your novel. Many overseas Chinese (huaqiao) whose families had gone abroad in previous generations make their way back home to China. In your book, how do they define home?

There's a great irony, of course, that all the huaqiao characters in the novel return to China as economic migrants, a century or more after their ancestors made the reverse journey, but none of them is consciously seeking their roots, none of them yearns for some deeper connection with the motherland — not even Justin, who is aware of his illustrious family's roots. They might unconsciously find solace in being a country where they belong in an ethnic sense, where they form part of the majority (at least on the surface). But for the most part, they are there for much simpler, clearly defined reasons: to make money and to start afresh in a new country that seems to offer them unlimited opportunity. Their superficial ethnicity — the way they look and speak, rather than the way they feel — is something they harness to their advantage, but it doesn't make them feel any less like outsiders.

What anchors them emotionally is their past in Malaysia, which was not necessarily a happy place for them, but in the course of the novel, they find that this messy history is perhaps more important to them than the seemingly glorious future that China offers. Home for them is a shifting, elusive concept — something that involves an uncertain tension between past and present.

From my experience, overseas Chinese have a vast range of responses towards China, ranging from outright rejection of any links to an anxious need to be accepted by the Motherland. If anything, the characters in the novel occupy the middle ground.

The central characters in Five Star Billionaire are lured to Shanghai where all things seem possible. They ultimately come to learn that money is not the measure of all things. Why did you focus on the perils of Asian capitalism, and not on its promises? Are you concerned about the growing chasm — especially between the rich and the rest?

It's strange, but I really don't see my representation of Asian capitalism as negative, which is very different from how most people have read it, particularly in the West. I personally believe that the increase in material wealth, especially in China, has been a very empowering and exciting phenomenon; I'm also — contrary to other interpretations I've come across — not at all against change. I'm a modernist at heart, I like change, am excited by the way societies and cultures evolve.

What I am less keen on is changing for the sake of changing, following a certain path just because we feel that it is the way forward. For example, China's economic rise an inevitable model for countries like Singapore and Malaysia? We've certainly come to think that we need to keep pace with that kind of development, that aggressive materialism is the only way forward. All I'm doing is scrawling a big question mark over this blueprint; I don't think I'm being judgmental. At the end of the novel, for example, most of the characters are in a better position to know themselves than at the start of the novel. They've been scarred by bad experiences involving money, but they don't actually sever their links with the way of life and thinking that has led them into difficulty, they merely redefine their relationship with materialism. We get the feeling that the ones who have been more successful at renegotiating their relationship with money stand a much better than of dealing with life is going to throw at them. Justin, Yinghui and Gary stay in Shanghai, despite what they have experienced in the city, which says a lot about how they (and I) feel about modern Asian capitalism.

Money in Asia is a complex, nuanced issue, and I've tried to show this in the novel. But none of this alleviates my general concern about the widening gap between rich and poor in giant countries like China and Indonesia, where in just one generation, after experiencing mass poverty, a huge class of billionaires has emerged from nowhere and begun to seal itself off from the rest of the country — and even, in the case of China, become an emblem of that country's modern culture. What that does to that country's collective way of thinking is worrying: what exactly should we be aspiring to?