Interview: First Transgender Woman in Philippines' Congress on the 'Beginning of Change' in Her Country | Asia Society Skip to main content

Interview: First Transgender Woman in Philippines' Congress on the 'Beginning of Change' in Her Country 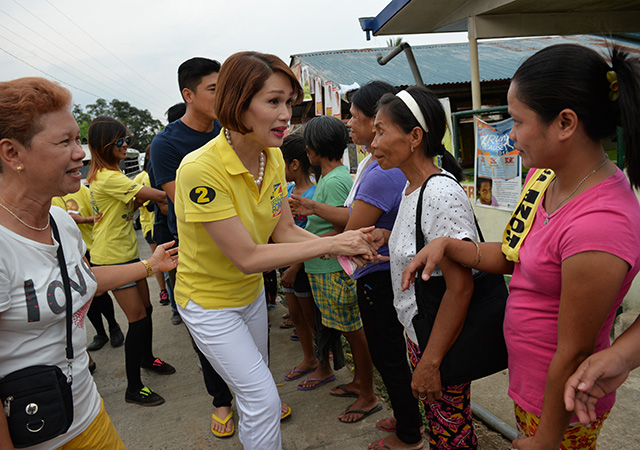 Geraldine Roman shakes hands with voters during a campaign trip to the town of Orani, Bataan province, north of Manila. (Ted Aljibe/AFP/Getty Images)

Following an eventful election season, Geraldine Roman became the representative of the First District of Bataan on May 10, 2016, becoming the first openly transgender woman elected into the Congress of the Philippines. From an early age, Roman has identified as transgender — making life in the predominantly Roman Catholic country, including a stint at an all-boys Catholic school, challenging.

Despite these difficulties, Roman enjoyed the support of her family, who encouraged her to focus on academics. After completing her undergraduate degree at the prestigious University of the Philippines, she obtained a scholarship to a university in Spain at the University of the Basque Country. While abroad, she completed a master's program in jouranlism and worked as a journalist and editor for a Spanish news agency, and became fluent in Spanish, French and Italian. Her achievements continued when she decided to return home to the Philippines in 2012, and eventually run for office in her district. Now ensconced in office, Roman doesn’t shy away from her transgender identity or passion for LGBT issues — but also doesn't want to be completely defined by them.

Asia Blog spoke to Roman about her unique background, the current political climate in the Philippines, and why diversity is so important.

On June 10, Geraldine Roman will be a distinguished guest during the annual Diversity Leadership Forum in New York hosted by Asia Society's Global Talent Initiatives. For more information on the Forum and how to register, follow the link below. Learn more

You’ve spoken about the challenges of growing up in the Philippines while identifying as transgender. Has the public, and your peers, been receptive to your election into office?

In general, yes. Everywhere I go, people greet me. They congratulate me and express their support for me. Some say my victory is “a breath of fresh air” or “the beginning of change.” Others encourage me to run for Senator in the 2019 elections. Of course, certain fundamentalists have criticized me — anonymously, through the internet — for who I am and have judged me.

Your election into office has contributed to unprecedented diversity in the Philippine Congress. How might this diversity influence the direction of Philippine politics?

It will certainly open doors to politics for people born with the same condition and members of the LGBT community. The message is clear: Gender and sexual orientation are no hindrances to serving the country. But my entry into Congress and the attention I have received have made me more determined to prove my worth as a public servant, both to my detractors and those who discriminate against members of the LGBT community.

Before you entered politics, you worked in journalism as an editor in Spain. What did your time away from the Philippines teach you — and what led you to return home?

My stint in Spain taught me a lot. First of all, there is definitely a wide chasm that separates the developed world and developing countries like the Philippines. I observed how the European governments function, and how efficient and effective their tax collection systems are. I also admired how the basics rights of people in Europe are respected, and how efficiently the government delivers basic services, such as health care, to people. The European mindset is more progressive, and their character more disciplined, and I would like Filipinos to consider learning from their example.

Many people have compared the newly-elected Philippines president Rodrigo Duterte to Donald Trump. Do you think this comparison is accurate? What do you think about Duterte’s leadership style?

They are both very outspoken to the point of being considered tactless and even uncouth. A lot of people, however, admire them for being straightforward or brave enough to say what others have always kept to themselves out of fear or to conform. But sometimes I wonder if they just bluster for attention. Both are family men and fear God, so I need to give them the benefit of doubt.

In the case of Duterte, many in the Philippines consider him a “breath of fresh air” in a country long ruled by the elite and where conservative and ultra-orthodox institutions, like the Roman Catholic Church, have traditionally held a grip on politicians. Like Trump, he appears to be anti-establishment; but unlike Trump, he admits to having socially progressive views. Duterte’s claim to fame is Davao City, which, as mayor, he transformed into a showcase city. To some extent, Trump’s success in business also speaks to what he would be capable of doing as president.

What do you think about the ongoing controversy with North Carolina’s so-called Bathroom Bill, which would prohibit transgender people from using public restrooms for the sex they identify with?

On the other hand, if that same person enters the men’s room, she could subject herself to harassment and physical harm. So which is more important, the feelings of discomfort some people may have or the safety of a person? Those in favor of the bill are afraid that sexual perverts pretending to be transgender would take advantage of women and children. But are there statistics or studies proving these claims? I will continue to follow the debate.