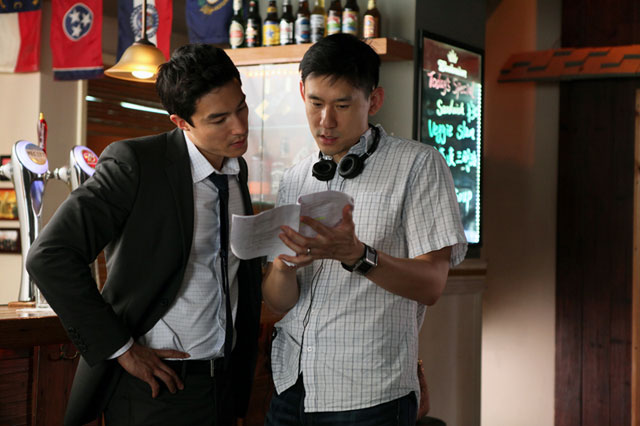 In Daniel Hsia's debut feature Shanghai Calling (2012), Sam Chao (Daniel Henney), a rising star in his New York law firm, is sent to Shanghai to close a major business deal — simply because he is the only Chinese American on staff. Unable to speak Chinese and with practically no knowledge of Chinese customs, Sam immediately gets himself into a big mess and is about to blow the deal. To dig himself out of trouble, he solicits help from a few China "experts" in the expat community, including Amanda Wilson (Eliza Coupe), a relocation specialist and Sam's soon-to-be romantic interest, and Donald Cafferty (Bill Paxton), the "mayor" of the local "Americatown."

Director/screenwriter Hsia responded to Asia Blog's questions about his new film via email.

What inspired you to make this film? Have you personally encountered some of Sam's experiences being a Chinese American in China?

The inspiration for Shanghai Calling came from my good friend Vance Wagner, who one day decided that he was going to move to Beijing. At the time he didn't speak a word of Chinese and had never lived outside of the U.S. But within a couple of years, he was fluent in Chinese, was reading and writing better than I could ever hope to, and telling me hilarious stories about what it's like to be an American living as an immigrant in someone else's country. As soon as he started telling me these stories, I knew that there was definitely a compelling and entertaining story that could be told about an "Americatown" of American immigrants living in China. As one of our characters explains, "It's kind of like Chinatown in the U.S., but the other way around."

It is ironic that Sam, a Chinese American who can't speak Chinese, needs to learn about the Chinese way of life from Americans in Shanghai who have no Chinese heritage. What does the film say about assumptions people have regarding a person's cultural background?

Thematically, Shanghai Calling is about the world turning on its head. We're at a unique moment in history where many of our long-held assumptions are being challenged. The United States was once the only superpower in the world, and China was once a very impoverished nation. People from all over the world came to America to find jobs and a better life. Now, Americans are moving to places like China to find jobs and build careers, and in a few years China will have the largest economy on the planet. One of my goals with Shanghai Calling was to showcase these paradigm shifts on a personal level with each of my characters, in much the way that you described above. And it's absolutely true that you can and will meet many white people in China who speak much better Chinese than the ABC's (American Born Chinese) who live there.

It is interesting to look at the experiences of Amanda and her daughter, who are both Chinese-speaking white Americans. Amanda is always handed an English restaurant menu despite her fluency in the local language. And her daughter refuses to speak English because she wants to be just like other children in Shanghai. Is it your intention to make them experience what minorities in the U.S. have to struggle with?

One of the many fascinating things I discovered about expat life is how much it mirrored my own childhood growing up in Chicago. My parents are originally from Shanghai, they speak Chinese very fluently, but because all of my friends were American I did my best to only speak English and paid very little attention in Chinese school. In China, Western children have Chinese friends who want to speak Chinese and only do Chinese things, and as a result those kids often feel more comfortable speaking Chinese than English! It's a fascinating paradigm shift, to think of Americans becoming immigrants even though America itself is often thought of as the "land of immigrants."

Your film has portrayed a lively world of the expat community in Shanghai. While watching the film, I couldn't help but wonder why these people are called expatriates in a foreign land while their counterparts in the U.S. are called immigrants. Can you offer any insights?

I've written a bit about this on my blog at shanghaicalling.com and I have a couple of theories. One is that the term "immigrant" calls to mind a very impoverished people, those "poor huddled masses" beckoned to America by the Statue of Liberty because their lives in their home country was so miserable. This mental image doesn't quite fit with the existence of most American expats in China, who are usually from upper-middle-class families, are well educated, and relocate to China in order to fill managerial or executive positions in large corporations. They live in nice high-rise apartments or large houses out in the suburbs of the Chinese cities.

The second theory is that the term "immigrant" sounds very permanent. If you "immigrate" to a place, you have left your old life behind and you're staying in the new country forever. The majority of American expats in China are only there for a short time — a year, two years, however long their bosses need them to stay out there. And while there are plenty of "lifelong expats" in China, most of them plan to return to the U.S. after a few years, especially if they have spouses and children who have been uprooted because of the move.

Serious questions aside, your film is just quite funny. I know that you are also a comedy writer. Where did your sense of humor come from?

I don't know, I've just always enjoyed telling funny stories. And I learned a lot about comedy writing from the many, many talented television writers I've had the pleasure to work with.