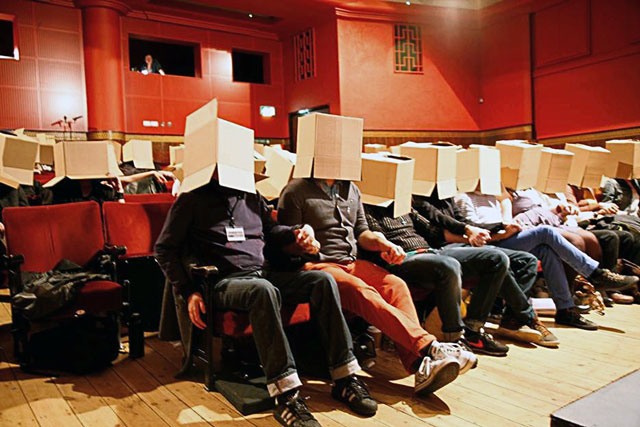 Bavand Behpoor, from "Trashing Performance," London, 2011. Presented by Performance Matters, documentation by Christa Holka. Behpoor, who divides his practice between Shiraz, Munich, and London, will present at Asia Society New York during the two-day ACAW forum on October 26 and 27, 2014.

Since its founding more than a decade ago, Asian Contemporary Art Week (ACAW) has been an annual New York City platform for connecting major local amuseums, galleries, and art professionals with their counterparts in Asia, through exhibitions, public dialogues, performances, and other projects meant to address the increasing prominence of Asian artists in worldwide art discourse.

A key partner in ACAW since the beginning, Asia Society ramps up its involvement this year via the FIELD MEETING on Sunday, October 26 and Monday, October 27, which will convene over 35 artists, curators, and institutional leaders from Asia and around the world for two days' worth of lectures, talks, and discussions. FIELD MEETING highlights include a keynote address by Tom Finkelpearl, the former president and executive director of the Queens Museum who was recently named commissioner of New York City's Department of Cultural Affairs (DCA) by Mayor Bill de Blasio, and a newly expanded scope that will take into consideration locales often left out of traditional notions of Asian artistic production, such as Beirut, Saudi Arabia, and Kabul.

Born in Afghanistan and based in New York, Asian Contemporary Art Week Director Leeza Ahmady is an independent art curator, educator, and specialist in art from Central Asia. Asia Blog caught up with her via email for insights into the thinking behind this year's ACAW events.

Asian Contemporary Art Week (ACAW) is now well into its second decade as an annual event in New York City. But for the benefit of newcomers, or people who might still be on the fence about attending the forum at Asia Society on October 26-27, can you describe what ACAW's origins were — what need it was originally meant to fill?

ACAW was established by the coming together of Asian Contemporary Art Consortium (ACAC) in 2001, a small group of curators, museum directors, and gallery owners who were disenchanted by the lack of real critical attention for Asian contemporary artists and exhibitions in New York and decided to try to change that reality. At the time there was an absence of journalists, writers, or critics covering the small but definitely growing field.

I came on board in ACAW in 2005, asking this question: what do we mean by the term Asia, exactly? In the U.S., due to past scholarships and ways in which educational institutions have characterized the region, Asia mainly refers to China, Japan, and Korea. India has entered the discussion more recently. In a sense, Asia in the United States has meant areas where the Rockefellers have been collecting.

If we were to visit universities, there are mainly two categories, Near Eastern studies and East Asian studies, but there has never been a kind of panoramic perspective of this space called Asia, which after all is very large geographical space.

Even a casual museumgoer is probably aware that the big institutions in New York present far more contemporary Asian art than they did even 10 years ago. Just recently, for instance, we've seen Sopheap Pich and Imran Qureshi at the Metropolitan Museum, and the No Country exhibition at the Guggenheim. How has ACAW evolved to keep pace with these developments?

By the time an artist is presented here in New York, his/her practice would have undergone a whole series of lenses — institutions, people, and ideological interpretations. There is a stamping process that artists go through before they are presented in a museum and even galleries. So the majority of artists we see here are already very established locally and internationally.

More work is necessary in this area, but the fact is that there are other types of history-making that we must make room for. Art history has typically been written from the perspective of a collective of artists in a particular place engaged in one style in a mass movement. What about individual artists and their work in different parts of the world, made in isolation from other artists? How do such artists enter history? One of our objectives with the FIELD MEETING is to shift how we read art works and what we insert into art history.

Curatorial work is about discriminating, choosing, and selecting. However, it is equally important to consider ways in which we present artists by creating a more direct access to their own thoughts, objectives, and processes a little more removed from curatorial and institutional readings; I think this is what one encounters when one visits with an artist in her or his studio, which is why I decided that this year's signature program, the FIELD MEETING, will be modeled after a studio visit, though on a communal scale.

Asia Society has been integrally involved in ACAW for many years, but I don't believe we've ever held an event quite as ambitious as the two-day FIELD MEETING here on the premises. Could you tell us a little about what you anticipate for the event — like who the likely attendees will be, for instance?

In a sense we are also curating the audience. The idea is to fill the room with art professionals not only from New York but also from other cities in the U.S., which is very ambitious. We are very conscious of who will be attending, who is going to be in the room — do they want to be there? How can they benefit from this? Instead of passively inviting an audience, we have been busy looking at our contacts to consider all the people we know and those we don't, drafting individual invitations to have them join the FIELD MEETING. A great percentage of the audience will be art professionals, scholars, and art practitioners because our vision has been to create opportunities for these individuals to energize and rethink their future programs and collections.

Many of the FIELD MEETING participants only live in Asia part-time, some live in multiple continents, and many are based in New York or elsewhere in the world. This is why we are listing the cities where each participant is living next to their names; that is a telling story all on its own.