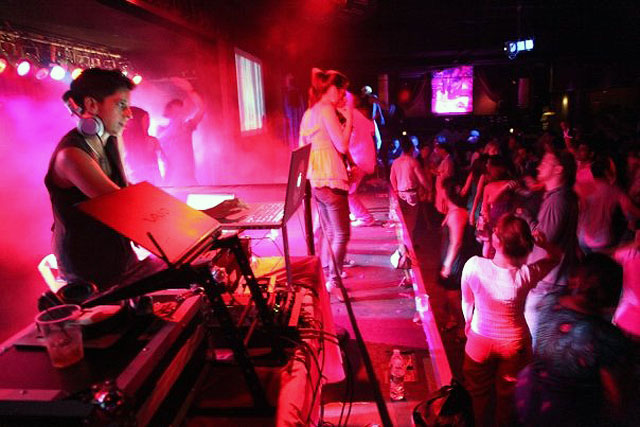 She is the DJ, she is what she plays: Ashu Rai (L), co-founder of Sholay Productions, works the turntables. (Jennifer MacFarlane)

New York City DJ Ashu Rai is a co-founder, with Atif Toor and Rajesh Parwatkar, of Sholay Productions, promoters of the Desilicious series of parties for LGBT progressive South Asians and friends. Inaugurated in the months immediately following September 11, 2001, Desilicious has gone from being an underground sensation to something of a New York institution over the past decade, receiving respectful notice from the New York Times and hailed by Time Out New York as "one of the city's best dance parties."

Drawing from Bollywood hits, bhangra, house, and her own eclectic tastes, Rai provides the ideal aural accompaniment to parties that remix the flamboyant Bollywood aesthetic for a whole new context — drag queens are a regular presence, and the word "fabulous" is almost de rigeur for describing any Sholay event.

The daughter of Indian immigrants, Rai was born and raised in Northern California. Obsessed with a wide range of music from an early age, she began disc jockeying with late-night slots in college radio (KUSF) and sets at parties around San Francisco before eventually settling in New York and making her Desilicious debut in early 2002.

When you founded Sholay Productions in 2001, the Defense of Marriage Act was only a few years old. In May, meanwhile, Minnesota became the 12th U.S. state to legalize gay marriage. This is a serious cultural shift. Do you think there's been a similar change in attitudes within South Asian communities in the United States?

We have witnessed a shift in attitude and acceptance since our first party over 11 years ago. A lot of our younger attendees have been out since their teens to close and extended family, work colleagues, etc. We have also seen attitudes around LGBT issues changing over the years in South Asia. In 2008, in Nepal, the Supreme Court gave full equal rights to LGBT citizens, including the right to marry. In 2009, we celebrated the Delhi High Court's decision in India to repeal the colonial-era sodomy laws. And, gay and lesbian support groups have started to become more visible in Pakistan.

We're seeing a sea change in this country with gay marriage becoming legal in New York and many other states. And, in California (where my niece and nephew live), queer history is now a mandatory part of the school curriculum. I've also been DJing more queer desi weddings and it's quite amazing to see such acceptance from South Asian families.

Obviously, there is still a lot of work that needs to be done in terms of transphobia, domestic violence, bullying and even here, in the queerest neighborhoods of New York, there has been a recent rash of violent gay bashings. And, mainstream Bollywood really needs to shape up and improve its portrayal of LGBT folks!

Sholay Productions was launched with the intent of providing a welcoming space for South Asians, particularly Muslims, in the wake of 9/11 and the xenophobia it led to. Have you seen progress on that front, 12 years later?

Sholay Productions was founded on the heels of September 11 as our community was reeling from both the attacks and the fallout (racism, anti-immigrant sentiments, bashings, and an appalling foreign policy under Bush/Cheney). Queer South Asians were feeling marginalized in post-9/11 New York, even within gay and lesbian spaces. We felt that a dance party with an eclectic mix of Bollywood and house music would provide both an empowering space for queer South Asians and an opportunity to celebrate the diversity that we considered New York's greatest strength.

Emotionally, the repercussions of 9/11 have impacted many of us — but within our South Asian community, the party space that we have developed has transcended national borders and identity politics. Our events have become known for their welcoming atmosphere, particularly for LGBT South Asians who are often disenfranchised in India, Pakistan and other countries in the diaspora.

The Desilicious parties are now in their second decade and have won the attention of mainstream outlets like the New York Times and Time Out New York. How do you and your partners Atif and Rajesh keep it fresh — have you consciously set yourselves new goals, for instance?

We come up with various themes that encourage guests to get creative. Some of our popular party themes include Starlust (a play on the Bollywood gossip magazine Stardust), Bollywood Vamps and Sparkle. Our Fifth Annual Hot Pink Pride party, coming up on June 28, is one of our biggest events of the year and a lot of folks go all out, arriving in various shades of pink. Neeraj, our visuals maestro, mixes and projects clips from Bollywood films with psychedelic visuals and pushes the creative envelope at every event. We also throw in one-offs and fundraisers that are based on current happenings like Obamarama (for both the 2008 and 2012 elections). Now, we're building an international presence with parties in London (June 15) and Toronto.

We are definitely pushing our online presence to build a stronger virtual community. Last year, we revamped our website, which includes a Sholay blog, Pop Kulcha, where we highlight issues, trends and other items relevant to our audiences. We have a guest blogger from the UK who gives us a perspective of the gay Asian scene from across the pond. We also interview various personalities, including bestselling author Manil Suri.

I know you had a blast at one of Asia Society's Arif Lohar concerts last year, and from your Twitter feed it's clear you follow a wide range of music genres. Two-part question: 1) How do you keep up with all that music, and 2) What's a typical mix at one of your parties these days?

The Arif Lohar show, which also featured a friend, Arooj Aftab, was one of my live musical highlights of 2012 (along with Kraftwerk's residency at MOMA). Growing up, it was always the record store — Tower Records or the independent shop in Northern California where I lived — and British magazines (Melody Maker, NME, i-D magazine and The Face) that informed me of the latest musical trends. Though I do miss the intimacy of the record store and that endless quest for knowledge, the Internet has made it possible to learn about a wider range of music much quicker, including music blogs, Twitter and sometimes even Facebook.

At the parties, you will hear a mix of Bollywood and world beats (usually remixed) along with some pop or house music. The genres have changed over the years as our crowd diversifies. To get a taste of music from a recent Sholay party, listen to this "Best of 2012" mix.

Last but far from least: summer, finally, is less than a month away. What are you going to be listening to? Any recommendations for readers who can't come hear you spin in person?

Summer can't come any quicker! In terms of Bollywood, the soundtrack to the film Yeh Jawaani Hai Deewani (which came out last week) is quite hot. It includes a dance performance of "Ghagra" with the male star (Ranbir Kapoor) and Madhuri Dixit, who's been a star of Bollywood since the late '80s. If you've attended a Sholay party, you'll have danced to at least half a dozen of her famous numbers (in addition to seeing her on the video screen).

And I've got recent releases from these bands on my current summer playlist: some of the new Daft Punk, Rhye (a wonderful L.A. duo), Disclosure, Savages, Girls Names, and The Knife. There have been recent reissues from some of my favorite bands (The Breeders, Fleetwood Mac) and a wonderful compilation, Change The Beat: The Celluloid Records Story 1980-1987, that really captures the eclectic dance music scene that came out of downtown NYC during the '80s.

Check our site soon for a mix of our favorite summer tracks.