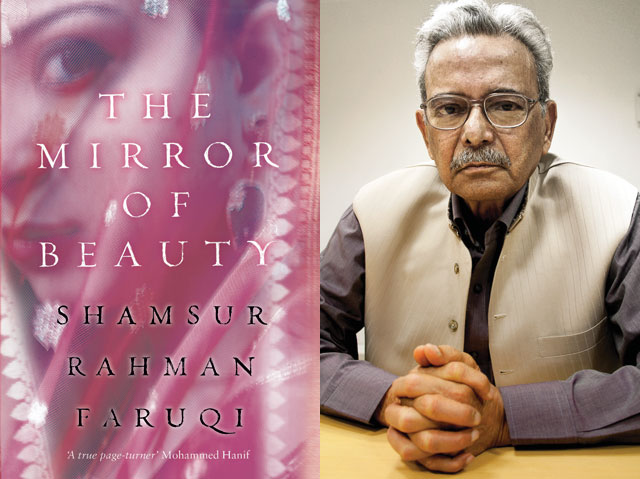 Historical fiction in English may never be the same after the publication this summer of The Mirror of Beauty (Penguin India), Shamsur Rahman Faruqi's translation of his massive 2006 Urdu novel Kai Chaand The Sar-e-Aasmaan. Weighing in at 984 pages, it's the fictionalized life of Wazir Khanam, a celebrated beauty of 19th-century New Delhi whose loves included noblemen in the Mughal court and an officer of the British East India Company.

The novel is a dual feat: Faruqi enters the mind of a fully dimensional 19th-century woman, willful and independent yet also bound by the conventions of her time and place, while also depicting, at an extraordinary level of detail, the glorious late phase of the Indo-Muslim civilization of which Wazir is a part. Working in a stately, quietly hypnotic idiom meant to evoke the conventions of traditional Urdu storytelling, Faruqi recreates everything from the clothes and jewelry these people wore to the physical spaces they inhabited and the ways they wooed the opposite sex.

The author is particularly concerned with the art, poetry and music that shaped, and was in turn shaped by, his subjects' imaginations: this is a story that finds room for Kashmiri carpet weaving, Kishangarh miniature painting and Delhi poetry recitals (mushairas), all realized in what must be the most sumptuous descriptive passages in contemporary writing. Faruqi ranges so confidently across this landscape that ultimately his big book feels less like a eulogy for a vanished world than a bold act of cultural reclamation.

(The Mirror of Beauty is available in a Kindle edition, but I want to add that Penguin India's rose-tinted hardback is itself a thing of beauty, for readers who don't mind a little literal heavy lifting along with the figurative kind.)

Born in India in 1935, Shamsur Rahman Faruqi has for decades been one of the leading figures in Urdu literary culture. (A 2004 Dawn profile referred to him as "the T.S. Eliot of Urdu criticism.") He was awarded the Saraswati Samman, one of India's most prestigious cultural honors, in 1996, and The Mirror of Beauty can be seen as the crowning achievement of a career that includes poetry and short stories in addition to essays, polemics, and formidable multi-volume works of critical exegesis. (How he also ascended to a top position in the Indian Postal Service while accomplishing all of the above is a mystery for future generations of literary scholars to unravel.)

From his home in Allahabad, Faruqi responded to Asia Blog's questions via email.

I'm fascinated by the idea that you effectively wrote your novel twice — first in Urdu and then a second time, when you rendered it into English. For those of us who aren't familiar with Urdu literary tradition, what were some of the specific challenges the translation posed for you?

There were three kinds of challenges, but they all can be described as innate to the text. First, and insurmountable: The language, which is high Urdu on the one hand and archaic on the other. I could do nothing about the high Urdu except to avoid "stiff-necked English" and write in a natural, flowing rhythm recognizable as English, but not amenable to evaluation or description in terms of "influence." The problem of archaic Urdu I solved by writing deliberately archaic English, avoiding all words and usages that were not known in early 19th century.

My second problem was the narrative voice. I wanted the narrator to be absent as much as is humanly possible. I solved the problem in Urdu, largely, by using as many registers as possible: learned men's Urdu; the Urdu of the landed gentry; women's Urdu, the Urdu of the "working classes" the English of an Englishman of the 19th century as it would sound in Urdu translation. Even the narrator's voice changes according to the narrator, from high Urdu to matter-of-fact narration.

My third problem was the profusion of poetry, Persian and Urdu, much of it directly quoted but some of it only alluded to (in the hope the literate reader would recognize the allusion). The actual poetry I met head on, by translating it into English as best I could, not striving for the "literary" effect but also avoiding the "literal." The allusions had to be given up, sometimes with a heavy heart. An allied problem was the profusion of proverbs and idioms. I just let them go, unless I could find a telling equivalent in English, or could do it myself.

I want to emphasize that by "high Urdu" I don't mean bookish, pedantic Urdu. I mean idiomatic Urdu which draws creatively and continuously on the resources of Urdu and Persian, an Urdu in which Arabic gets a more than casual look in, and in which "literary" words, even if Sanskrit based, are preferred to "plain" words.

Contemporary readers will respond to Wazir Khanam as an exceptionally independent woman, but you also leave us with no illusions about the constraints someone in her position would have faced. Were you ever conscious of walking a tightrope — of having to balance her thoughts and actions with what would have been plausible for that time and place?

Wazir Khanam is entirely plausible, for she actually happened! Aristotle famously observed that if an event did take place, then it is true, even if defies the laws of probability or necessity. But for one detail, the events described in the novel in relation to Wazir Khanam are all true.

Wazir Khanam's courtship with the Navab is a kind of elaborate verbal fencing in which she and he each quote poetry as a means of both revealing and concealing their feelings. How would they have become familiar with so much poetry — other than the mushaira, what were poetry's primary means of transmission?

Mushairas were not relevant, especially because women didn't go to mushairas, except perhaps a mushaira inside a Haveli which provided for the purdah. Literacy was quite common among women of the "genteel" classes, and certainly a must for the women of what we would describe today as "upper" classes.

For the kind of woman that Wazir was, it was quite natural that she should have read more than the average young lady of a "genteel" family. In the book I have occasionally described the kind of reading that Wazir did, as a young girl, or as a mature woman. For persons like Shamsuddin Ahmad and others, growing up without reading — and remembering — a lot of poetry was unimaginable in that culture. It was a culture that expressed itself by poetry and in poetry. It was a culture that was still quite oral — poems heard or read were passed on from hand to hand — but the culture was not illiterate. It valued literacy as a quality of the humans, and humans alone.

In a recent interview with the New York Times "India Ink" blog, you referred to your hope that the novel might help younger readers learn more about where they came from and address the "discontinuity [from] what the world was before 1857." Do you feel Indians might be more receptive to acknowledging this part of their past in the 21st century?

Actually, I am not sure what I can hope for my novel really to do in our century, given its constraints, its confusions. But I can always hope that the novel might point the young people toward our common history, our common past, which gave us much but we were persuaded to dis-acknowledge it.

There aren't a lot of guideposts for readers looking to explore modern Urdu literature in translation. Among the books that are widely accessible, we have Manto's stories, Basti by Intizar Husain, River of Fire by Qurratulain Hyder, and now The Mirror of Beauty. What else might the curious English-language reader want to investigate?

It is true that there hasn't been, as a whole, much translation of modern Urdu fiction into English, though there has been a spate of translations over the last score or so years. The earliest translations (well before a score of years ago) were Khushwant Singh's translation of Rajinder Singh Bedi's prize winning novella "Ek Chadar Maili Si" as I Take This Woman. Again, Khushwant Singh and Mahdi Abbas Husaini translated "Umrao Jan Ada" (1900), considered by many to be Urdu's first great/modern novel.

Of late, there have been translations from Ismat Chughtai, ably rendered by M. Asaduddin. There is also Abdullah Husain’s self-translated "Udas Naslen" as Weary Generations. Muhammad Umar Memon has translated almost everything of Naiyar Masud. Mostly published by minor American or European presses, now some of Memon's translations from Naiyar Masud will be available universally from Penguin this year. Memon has devoted a lot of his considerable energies in translating some of the lesser-known but extremely good writers like Hasan Manzar, Mansha Yad, Asad Muhammad Khan and many others, in his invaluable Annual of Urdu Studies.

Sukrita Paul Kumar has translated from her father, the well-known modern fiction writer Joginder Paul. Baran Farooqi has translated Syed Muhammad Ashraf's award winning collection "Bad-e Saba ka Intizar" as Waiting for the Morning Breeze. Of great value are the numerous anthologies. There are, for instance, anthologies made by Muhammad Umar Memon, M. Asaduddin, Alok Bhalla and Rakhshinda Jalil, among others.

Then we have the milestone anthology, Oxford India Anthology of Modern Urdu Literature, edited by Mehr Afshan Farooqi, in two volumes. The second volume is devoted to fiction and nonfiction and has excellent translations. The period covered by the anthology is 1905-2005, roughly.