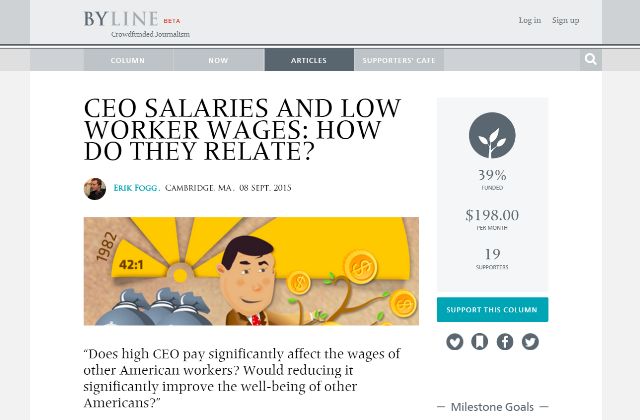 An article appearing on the Byline platform. (Byline.com)

Seung-yoon Lee, an Asia Society Asia 21 Young Leader (class of 2015), is the CEO and co-founder of the crowdsourced media platform Byline. Launched this past April in beta mode, it aims to move away from the advertisement and subscription-based business model of journalism with the mission of “helping journalists to get funded directly by the public, so that they can report the stories that need to be told.” Within eight weeks of its launch, it became the most read outlet of its kind. In an interview with Asia Blog, Lee discusses the current media industry landscape and why he feels the time is right for a platform like Byline.

How do you view the media industry these days?

There’s a huge problem at the moment in journalism and the publishing industry, which is that no journalism or media company has figured out how to actually fund their content in this new age of the Internet. The big reason is that newspapers and media companies used to monopolize advertising. Now that’s gone to Google, Facebook, Twitter, and even Craigslist. Craigslist alone singlehandedly killed local newspapers in the United States because it took away all the classified ads. The implicit contract in reading an article for free is that I’m looking at your ad, which is subsidizing the content. But now even that’s gone, so it’s very big trouble for journalism and publishing industries.

So if you’re not going to finance your content by advertising, someone needs to pay for a subscription. No one has cracked that model besides Financial Times and The Economist, which have very specific niches and are very high class papers. The rest fail at the subscription model. Washington Post was sold to Jeff Bezos for $250 million, which was actually very cheap for a big paper. The owner — the Graham family — didn’t know how to make money from journalism. That’s the reality.

So how does Byline’s model deal with this?

Part of the lesson came from how Steve Jobs tackled the music industry. Ten years ago, everybody was downloading music for free — nobody was willing to pay for it — and Steve Jobs came along and said people who care about music will pay for it. But you just need to find a very intuitive way. So he unbundled this thing called an album and broke it down into songs and made people pay 99 cents for a song instead of buying the entire bundle. So for us, why don’t we unbundle this bundle called a newspaper and break it down into journalists? And instead of getting the public to buy the entire paper, get them involved in the production process. Let them pick and choose what they want and crowdfund. The resulting front page you have is unique to the individual with recommended stories based on their taste.

That’s the experiment we were carrying out. Our bet is that in the future, nobody will be willing to pay for general news, but people will pay for the specific niches they care about. If I’m into college football, I’ll just pay for college football blogs. If I’m into a very pro-Palestine view of Israeli-Palestinian conflict, I’ll just pay for that. We want to have a million niches on our platform and we want to connect a hundred or a thousand people to each niche. Our model is radically different from Buzzfeed, New York Times, or The Guardian because they try to get a million clicks to get advertising. For us, for each niche, we want about 100 to 2,000 geeks or activists or intensely passionate people to donate $1 to $20 to fund those topics. That’s our model.

How's it working out so far?

We started five months ago with five journalists, then we grew to 40. Some of them are making a lot of money. There’s a guy who’s a quite radical intellectual named Norman Finkelstein who’s making about $90,000, but he’s said he’s going to donate it to the al-Awda Hospital in Gaza. He’s a very pro-Palestine Jewish intellectual. Then there’s a woman who’s a radical feminist who opposes legalization of prostitution, which counters the mainstream feminist stance now to legalize prostitution for women’s rights. She got funded £7,000 ($10,750) to go across the globe to do reporting. We have a Greek economic blogger who’s making $2,500 a month to do his blogging. It’s his side job, he’s an actor. There are various success cases we’re building at the moment and we want to scale this to a thousand, ten thousand, a million and open new territory.

It seems some of the top paid writers are people who are very contrarian in their views.

I think a lot of the people that are working well are not mainstream people. They are people who don’t have voice in the mainstream papers, because they are too contrarian, as you said. The mainstream paper needs a million clicks, so these people can’t be served by the economics of newspapers. So you close that gap through crowdfunding. There’s a guy who writes about Japanese animation. You can’t write about Japanese animation every single day in a mainstream newspaper and make money. In this model, if there are 5,000 people who care about it, and you have 1,000 people backing you for $1 to $10, then you can write about it every single day. It’s about finding intense niches that are highly engaged. They want to back the story because this niche doesn’t get served by the media.

There’s a lot of criticism today of partisan media outlets like Fox News and MSNBC that just reinforce people’s pre-existing beliefs and serve to polarize. Do you see this as a problem with the Byline model?

I can see that, but first of all, I think news is inherently biased. There’s no such thing as fair and balanced news … even that’s a form of bias. It’s even more dangerous to depict news as unbiased. There’s a filter. Even the selection of news is biased. I think it’s better if you say, "I’m this kind of biased person. This is my bias, fund me." That’s healthier than saying we want to be unbiased when you’re actually biased. So that’s my philosophical point of view. In a sense we’re the most biased paper in the world because we want everyone to have a bias and expose their bias.

It’s also the job of our algorithm — however we want to curate the content. Let’s say we can make an algorithm in a way so that if you back a conservative writer on a gun control issue, you’ll see the other point of view. And that may be good for the website, because people sometimes want to read an article that pisses them off. I’m quite left-wing but I love watching Fox News. It’s fun. And maybe that actually increases engagement.

Are there other crowdfunded media sites you’ve learned from?

There are some platforms that have tried this before. But I think the crucial failure with those is that they became crowdfunding platforms for journalism instead of journalism or a media platform that happens to use crowdfunding. This is a very funny distinction, but if you actually look at the front pages of organizations that have attempted this, they look like the front page of Kickstarter or the front page of Amazon. You look at the pitch and then you start backing it, which is actually not appropriate for how journalism content is consumed. You have to read the content first to actually back that writer. You get consumed and gripped by the content and want to see this content even more in the future. That’s the psychology of crafting journalism, and I think they didn’t execute this well.