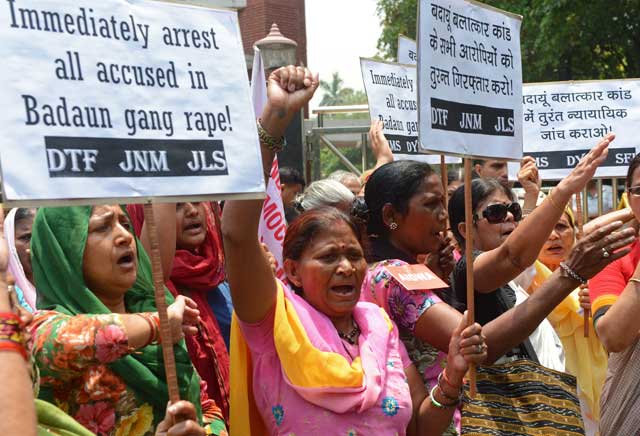 In response to the recent gang-rape and death of two teenage girls in the state of Uttar Pradesh, activists shout slogans in front of Uttar Pradesh Bhawan in New Delhi on May 31, 2014. (Raveendran/AFP/Getty Images)

In December 2012, the Wall Street Journal broke the story of “Bitiya," the 23-year old Indian woman who was brutally gang-raped in New Delhi. The publication was the first to report the full narrative of the victim’s life and death. Coverage of the gruesome crime took the world by storm, resulting in an unprecedented closer look at the issue of violence against women in Indian society. Bitiya’s death brought to light the threats that Indian women face daily and the deeply entrenched social expectations to which they are subject. For its thorough coverage, the Wall Street Journal was named a finalist for Asia Society’s 2014 Osborn Elliott Prize for Excellence in Journalism on Asia.

Gordon Fairclough, the South Asia Bureau Chief at WSJ India, spoke on behalf of his team, answering a few questions via email for Asia Blog.

In response to December 2012's New Delhi attack, the Indian government has been cracking down on sexual harassment. However, underlying social values have been implicated as a major factor in that and other attacks. Do you get the sense that people in India think the government is doing enough? How outraged is the average Indian citizen?

The December 2012 gang rape sparked large-scale protests that, within a matter of months, resulted in strengthened laws for the protection of women. But altering social norms and behavior is much more difficult and time-consuming and many Indian women remain deeply frustrated with the pace of change. For women in villages, traditional codes of conduct can still trump the laws of the state. Often families seek to hush up crimes committed against their daughters in order to protect what they see as their honor and the family name.

With the New Delhi attack and also the recent rape and death of two young girls in Uttar Pradesh, the issue of violence against women has been firmly on a national and international agenda. What do you think have been the most important developments since the WSJ broke the New Delhi story?

I think the biggest development since the Delhi gang rape is the fact that sexual violence — its causes and how to prevent it — as well as broader issues of women's rights and gender equality are on the national agenda in a way that has never been the case before. Something that was swept under the rug is now out in the open and covered extensively by the local press, forcing discussion about a sinister and pervasive force in Indian society.

What obstacles, social, cultural or otherwise, did the reporters face in writing these stories? In hindsight, is there anything they might have done differently?

In the wake of the Delhi attack, many women became more willing to take on their attackers in court and also to talk more openly about the crimes committed against them. Brave women willing to tell their stories made our work possible.