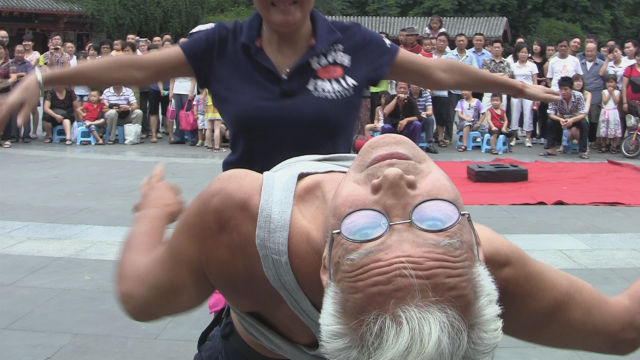 Three years ago this week I watched the 9th Beijing Independent Film Festival crumble under the weight of official fear — fear that the gritty low-budget, experimental dramas and documentaries screening in a remote Beijing suburb reflected a touch more truth about life in China than was permissible at the city’s gleaming downtown cineplexes; fear that these films would thus provoke too much critical thought. Festival goers, a modestly-sized crowd, made up mostly of other filmmakers, critics, and media professors (a grouping used to navigating censorship), were unsurprised when the power was pulled at the venue and the police looked on and did nothing to help.

Three years on, 28 of the films slated to screen at the BIFF in 2012—a few since programmed by festival founder Li Xianting (and again barred in Beijing)—are screening around New York through September 13 under the billing “Cinema on the Edge: the Best of the Beijing Independent Film.”

The New York traveling version of the BIFF was pulled together by Karin Chien, co-founder of Chinese independent film distributor dGenerate Films; by Shelly Kraicer, a long-time film festival programmer, critic and Sino-cineaste; and by filmmaker J.P. Sniadecki, one of a handful of American filmmakers ever to collaborate with Chinese in the making of independent films in China, in the Chinese language.

ChinaFile talked with Chien and Sniadecki, whose 75-minute single-take documentary People’s Park, co-directed with Libbie Cohn, captures street life in the southwest Chinese city of Chengdu, and was screened August 20 at Asia Society.

Karin Chien: I’d always attended the Beijing Independent Film Festival (BIFF) in August and the China Independent Film Festival in October and November. They were really key for us in setting up dGenerate Films, and became the main source of where we met filmmakers and built relationships and we found the films we wanted to distribute to North America. The last festivals I attended were in 2011. It’s fun. There’s a lot of friends, community, screenings, talks. It’s lively and inspiring for me as an independent film producer in the U.S. A month after the last festival, my twin sister was diagnosed with cancer. From November 2011, I’ve not attended a festival. Unfortunately, my sister passed away last August. I was 100 percent focused on her care and did not travel to China at the time. It was always in the back of my mind that the situation was becoming more difficult in China but that there was very little I could do about it from Los Angeles from her hospital room. My sister passed away in August, almost the same day the Beijing Independent Film Festival was shut down. In an odd coincidence, my sister’s name was Ting, and the day after she passed away I got pictures of the filmmakers wearing t-shirts at the closed-down festival showing the character ting, the one that means “stop,” and they were kind of in mourning. Of course, her name is a different character, but it sounds the same, and when I saw the photographs I couldn’t believe it. It really looked like they were attending a funeral.

That September, Shelly Kraicer reached out to me and said he’d been invited to be on the jury for the China Independent Film Festival in Nanjing and he suggested I go since I hadn’t been for the past three years. Before I left I had a conversation with [dGenerate co-founder] Kevin Lee, who said he wished we could restage the Beijing Independent Film Festival in the U.S. somehow. I mentioned the idea to Shelly, and when we mentioned it to BIFF, they offered their full support. It was important to us that they be involved, help us contact the filmmakers, and that we are doing this right so we can properly showcase work that’s coming out of China.

How hard is it to find these films inside China?

Chien: In China, you can access these films if you’re in the know. It’s quite hard to spread the word. If you don’t know about it, how do you find out about it? That’s the problem in China. If you do know about it, then you also know that these festivals take place. Something that’s happened in the last three years, mostly in response to the shutdown of many independent film festivals, is the creation and proliferation of new and decentralized networks of screening venues in China. There are at least two or three organizations that have between 20 and 60 venues that they work with to show independent films, in cafes, in bookstores. That, to me, is very interesting to see that happening. Festivals are very centralized. Everybody gathers in the same place and at the same time. They’re easier to target and the assembly of people is the main reason why they’re targeted. So, to create a more diffuse screening network is kind of brilliant. Also, it parallels what the independent film community is discussing in the U.S., where there is somewhat of an identity crisis. What’s the purpose of all the independent film festivals in the U.S., where there are now so many of them? Independent films are not getting distribution. Sure, there are online platforms, but there’s been a question of whether the independent film festivals form a distribution network to provide that opportunity. Then you look to China, where the independent film festivals are being shut down and these networks of distribution are springing up.

What motivates you to help to do this series now?

J.P. Sniadecki: From the very first time I went out to Songzhuang and met filmmakers Zhu Rikun, Wu Wenguang, Zhao Liang, and Ai Weiwei — the list goes on — Xu Xin and Feng Yan, I knew I’d encountered my tribe, my people. I’d been living and working in China for years and had lots of friendships, but these were people who were precisely concerned with exploring and maintaining that space at the margins, the cutting edge, the avant garde. As we know, that’s where a great deal of innovation in any artistic form comes from, and then it becomes incorporated and integrated into a more mainstream approach. That’s how you keep cinema fresh and keep cinema moving forward, and keep exploring its possibilities. Curating and programming and working to bring certain films to the foreground has always been a part of my practice. That’s how I began to be friends with these folks. I came to Songzhuang and met Zhu Rikun and mentioned the idea of having him come to Harvard, and that turned into this mini festival that I put together called “Emergent Visions,” showing films such as Zhao Liang’s “Petition,” or Zhao Deyong’s “Ghost Town,” which went on to have really good lives at other festivals after we’d been the first to show them. We saw ourselves as a way for programmers, such as Kevin Lee from dGenerate, to get a taste for these films without having to travel to Beijing or dive through catalogs.

Although China and the United States are vastly different, both countries have mainstream cultures with such a narrow notion of cinema. It’s sort of a confined space determined by what you have access to. If you’re from Michigan or you’re from Anhui province you’re not going to be able to see a lot of work outside of what the capitalist studio systems curate for you. I’m all about a love of cinema and trying to understand or at least make possible an awareness of all the different forms it can take, since it’s such a new art form and it’s exciting precisely because of it’s newness. There’s a moment in China right now with the DV and HD technology presents the first time there’s been any kind of amateur cinema in China. I don’t want to present too linear picture of development and say that China’s like we were 50 years ago but there’s a certain energy that comes out of everybody being able to be involved and then having also to face that resistance. In the U.S. back then many independent screening activities were banned often because of depictions of nudity or "perversity," but in China today it’s films that show other topics that inspire their own animosity or anxiety.

But it’s also about the space, not just the films. It’s the collective space that’s generated by these festivals that is valuable for getting people together to speak outside the various pressures and demands on our lives. After seeing the uptick in the oppression and the literal pulling of the plugs on the opening films at these festivals in China that occurred during the switchover to Xi Jinping’s power, I felt it would be great to do a screening series in the U.S.

Sniadecki: I think that a lot of the distinctions between avant garde and the margins, and then mainstream and the studio system, are upheld by various gatekeepers who, from my experience, have not been flexible or interested in different forms of storytelling. Of course there are those films that seek an élite audience and are opaque to a lot of folks. Then there are other films that are marginal for other reasons — perhaps because they don’t have the production value or they have a different sense of cinematic time. I feel like audiences are ready for it, and I feel like Chinese audiences perhaps would really get excited about seeing something closer to their own experience portrayed online or in the theaters that they could purchase on DVDs. American audiences are in a similar situation in that the mainstream culture makes a lot of noise and takes up a lot space in terms of cultural production but I feel like audiences nonetheless are flexible.