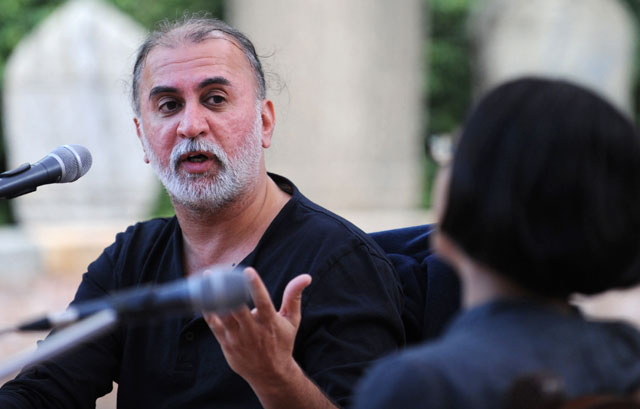 Author and journalist Tarun Tejpal talks to an audience during the Kathmandu Literary Jatra in Kathmandu on September 16, 2011. (Prakash Mathema/AFP/Getty Images)

Published in India in 2009 and released this month in the U.S., Tarun J. Tejpal's novel The Story of My Assassins starts like a thriller: a prominent New Delhi journalist learns that the police have just arrested five hit men who were on their way to murder him.

Trying to find out who ordered his death, the journalist begins to delve into the lives of the five men in custody. Their back stories then take over and indeed become the heart of the novel, as we follow the grim trajectories that led each of the "assassins" from birth to a life of crime. Horror vies with understanding as Tejpal, working on a mural-sized canvas that takes in both village backwaters and urban slums, creates an underworld milieu driven by nonstop exploitation and violence that is almost feral in its savagery. (This is, emphatically, not a book for faint-hearted readers.)

Ultimately, as we learn that the five men are merely pawns in a much larger game that extends into Delhi's power centers, their stories become a powerful indictment of the society that produced them.

If Assassins seems to capture the seamy Delhi milieu with unusual authority, that's because its author draws on a long career in investigative journalism that includes an actual experience with death threats, after Tejpal and his publication Tehelka helped expose corruption in India's Ministry of Defence.

Tejpal discusses his novel, and some of the real-life experience that went into it, at Asia Society New York this Thursday, October 4, in conversation with Newsweek International editor Tunku Varadarajan. For those who can't attend in person, the program will also be a live webcast at AsiaSociety.org/Live at 6:30 pm ET on Thursday.

On the eve of his U.S. book tour, Tejpal responded to AsiaBlog's questions via email.

For a reader here in the U.S., The Story of My Assassins seems intended in many ways as a rebuke to movies like Slumdog Millionaire and the Incredible India! PR campaign. Did you deliberately set out to create a kind of counter-narrative to the official account of the new, rising India?

Well, not really to create, but to explore and capture the buried and unarticulated mutliple narratives of India — most of which fall in the penumbra of "India shining."

Given its command over most modes of communication, the middle and upper middle class tends to write the narrative of India — for itself and for the rest of the world (many successful books and films being part of this). This is often a highly sanitized, superficial telling — some of it out of ignorance and some of it because it is catering to a Western agent/publisher/reader's palate.

I wanted to take a hammer to this artifice, to this delusion. I wanted to try and tell the story of India as we live it, without concessions, in all its maddening complexity.

Each of the five assassins is given a distinct, detailed back story that's so fully realized it could almost be a short novel in its own right. Did you do specific research for these stories, or had your career in journalism already given you a grounding in the underworld milieu?

A bit of both.

Tehelka and the journalism it pursues focuses a great deal on the lives of the underclass, so that helps. I also researched just about enough to establish the authenticity of all the material I was dealing with. But not too much. I always fear excessive research that tends to overtake a novel, and leaches out its emotional and imaginative impulses.

I use the metaphor of a kite for research in novels. The string of the kite is the research, and it should be robust enough to keep the kite tethered to the ground (and not have it float away). The actual narrative is the kite. And the challenge of the novelist is to make the kite soar and sing and dance (not focus on the string). 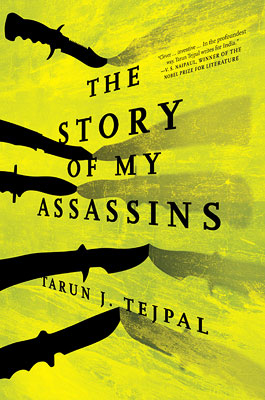 The narrator's acidic observations about the world around him hold our interest, but at the same time I was impressed by how unlikeable you make him earlier in the book. Were you ever concerned you might lose readers through the first 100 pages or so, which are told solely from his perspective?

Good question. In fact, it took me a very long time to arrive at the voice of the book.

My material, and my ambition, for the novel was overwhelming. I was pursuing the polyphony and the incredible multiplicity and insane blend of modernity and antiquity of India. I risked banality (my single greatest dread) with a voice that would be sincere. It's only when I found the voice of that acidic, acerbic, dislikeable narrator was I able to enter my material. I needed that angularity to dig myself in. It's like when you put a spade into the ground — you go in at an angle. It provides traction, it allows you to upturn the earth, you can dig deep.

Alas, terrible thing to say, but I was not thinking of the reader at all. I just wanted to tell the story I wanted to tell — as uncompromisingly as I could. I was walking a road in the dark — the daylight of readers, etc., lay far away.

Many of your characters, even some of the most venal, cite the Bhagavad Gita as an inspiration and a guide to action — and seem to be quite sincere in doing so. Would you care to comment on this aspect of the book? Has it attracted much notice in India?

That was a deliberate conceit I played with in the book.

I believe the greatest beauty and horror of Hinduism is that it has a morally slippery core. Unlike Islam or Christianity, it's not a sternly prescriptive religion. It leaves volition to the individual; and its most famous text, the Gita, creates a panoply of justifications for human action. From seer to mafia don, we all find our validations in that amazing text.

Somewhere, I believe, this Hindu ethos permeates all life on the Indian subcontinent, for better and for worse. As a novelist struggling to write India, this was a highly potent and seductive strand.

Lastly, I'm curious to know what it's like to write a 500-page novel that focuses so relentlessly on squalor and violence. Were there ever times when you felt as if the material might be getting to you?

Not at all. I live in its midst.

And a writer's job is to serve up the unpalatable, to provide discomfiture, to force us to see much of what we would try and duck. A writer's job is not to provide amusement or reassurances. That's the job of cinema and TV and religion and politics.

Having said that, I feel the lives of all the assassins contain both beauty and moments of epiphany. And of course there is always the great and wonderful refuge of humor — and I hope Assassins shines with some of it.